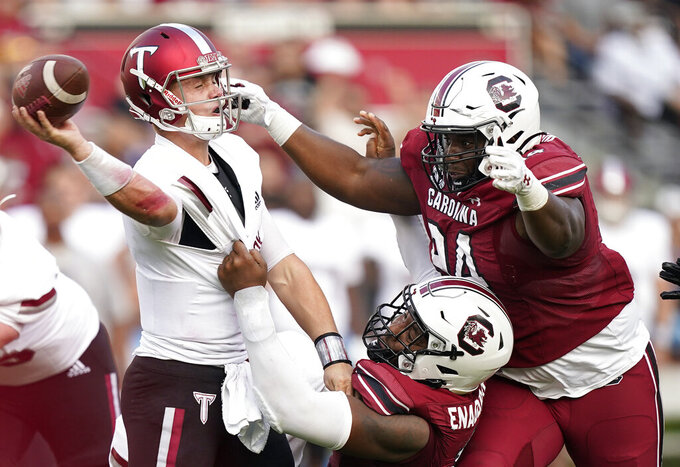 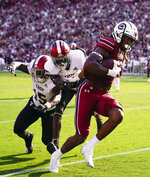 But as long as the Gamecocks' defense can pick up the slack, as they did with their third touchdown of the year against Troy, they can continue to work on it without feeling too bad.

David Spaulding returned an interception 74 yards for a touchdown, Parker White kicked three field goals and South Carolina overcame several mistakes in the second half to hold off the Trojans 23-14 on Saturday.

White booted a 37-yard field goal in the fourth quarter with just over two minutes left to make it a two-possession lead and Damani Staley intercepted Taylor Powell with less than 30 seconds to play.

“I don’t know about you guys, I feel like I aged about 40 years during that game,” said South Carolina coach Shane Beamer, who saw his Gamecocks score one defensive TD and should have scored another. “We talk about playing smart football. We didn’t do a great job of that today.”

The Gamecocks (3-2) led 17-7 at halftime after Spaulding’s return. Yet the Trojans (2-3) wouldn’t go away and South Carolina’s inability to take advantage of its numerous chances to score helped Troy stay in it.

“The key to the game, obviously, the turnovers. Seemed to be the difference,” Troy coach Chip Lindsey said. “We matched their intensity, we matched their physicality, I thought. At the end of the day, we can’t put the ball on the ground.”

The Gamecocks still haven’t found a solution for their sputtering running game, but quarterback Luke Doty completed 20 of 34 passes for 255 yards and a touchdown with no interceptions and one fumble.

The Gamecocks blocked a Troy punt in the third quarter but only got a field goal out of a possession starting at the Trojans’ 23-yard line. Then after an interception by South Carolina’s Jahmar Brown was wiped by a booth review, the nuttiness began.

The Gamecocks forced a punt but Ahmarean Brown muffed the catch. Troy set up for a third-and-9 on the next possession. The Gamecocks’ Jaylan Foster sacked Powell on a safety blitz and the ball squirted loose. Staley retrieved it and tried to run, but was tripped.

The ball again tumbled to the turf and Brown picked it up and began running. He easily out-paced the rest of the field for a touchdown, except Brown flipped the ball to the referee a split-second before he crossed the goal line and it rolled out of bounds.

“You talk about emotional rollercoaster, golly. Went from excited for the play we had, then mad, then relief,” Lindsey said. “It was crazy how that worked out.”

South Carolina held again, forced a punt, and again tried to drive for the game-clinching score. Doty had the ball knocked out of his hand and the Trojans recovered.

The Gamecocks got it right back after Foster forced a fumble and Zacch Pickens recovered.

South Carolina managed to hold onto the ball and drove 53 yards in 12 plays for White’s last field goal. The sixth-year “super senior” hasn’t missed a kick all year and mentioned Samson in the post-game as he showed up with a bushy beard. He has vowed not to shave or cut his hair until he misses one.

Troy: The Trojans are $1.4 million richer from the guaranteed contract agreeing to the game but felt they should have won. The mistakes giving them the advantage were there but the Trojans couldn’t make them count.

South Carolina: The Gamecocks got a win and the knowledge that they were more lucky than good. For a team that wasn’t expected to do much under coach Shane Beamer in his first season, some progress was expected to be shown. The defense has been marvelous but the offense continues to flounder.

After a rash of penalties, including several personal fouls, early in the year, South Carolina had made a concerted effort to clean up its game. The Gamecocks had five flags for 45 yards in last week’s loss to Kentucky.

Against Troy, they had 10 for 93 yards. One roughing the passer call, and one targeting call, looked extremely questionable but the others were procedure penalties or blatant holds.

Troy lost both of its fumbles and Powell threw two interceptions, the most damaging being Spaulding’s pick-six that turned the game around. The mistakes and inability to capitalize on all of the chances South Carolina gave them negated the Trojans’ 7-14 conversion rate on third down.