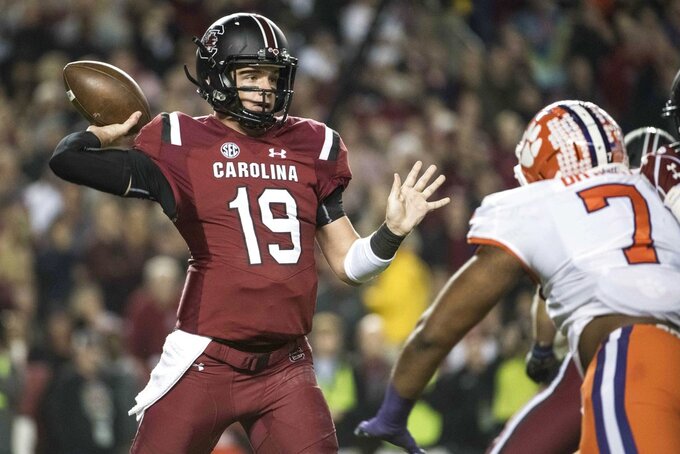 FILE - In this Saturday, Nov. 25, 2017, file photo, South Carolina quarterback Jake Bentley (19) attempts a pass against Clemson defensive end Austin Bryant (7) during the first half of an NCAA college football game, in Columbia, S.C. South Carolina has pinned much of its hopes for an improved offense on a fast-paced, quick strike attack it's worked on since changing offensive coordinators last December. The first try for the Gamecocks comes Saturday when they open the season at home against Coastal Carolina of the Sun Belt Conference.(AP Photo/Sean Rayford, File)

COLUMBIA, S.C. (AP) — Ready, set, tempo.
South Carolina has pinned much of its hopes for an improved offense on a fast-paced, quick strike attack it's worked on since changing offensive coordinators last December.
The first try for the Gamecocks comes Saturday when they open the season at home against Coastal Carolina of the Sun Belt Conference. After struggling on offense — South Carolina was 14th and 12th in overall Southeastern Conference offense in Muschamp's first two years — the coach promoted receivers coach Bryan McClendon to guide the attack.

McClendon has preached speed, speed and more speed during the spring and summer practice sessions.
McClendon's mentality, Muschamp said, "is very aggressive in what we're trying to do down the field. In order to create explosive plays, you have to take some shots."
The Gamecocks may the players to make those shots count.
Returning this week is receiver Deebo Samuel, who had accounted for six touchdowns in less than 11 quarters before missing the final 10 games with a broken leg.

Tailback Rico Dowdle, who struggled with injuries, is also healthy and looking to get back to the form that saw him lead South Carolina in rushing as freshman.
Quarterback Jake Bentley has taken well to the juiced-up offense that's required quicker decision making than his first two seasons as a starter. Muschamp said Bentley's completed about 68 percent of his throws during preseason drills.
"I think he's had a really good training camp," Muschamp said. "And he's got some weapons outside."
Coastal Carolina, in its third season as a Football Bowl Subdivision member, is now eligible for the postseason. The only other time the Chanticleers came to South Carolina in 2013, the Gamecocks had their way with the FCS opponent in a 70-10 victory. Coastal coach Joe Moglia thought that loss hampered his team's playoff run because of the physical pounding they took in the loss.
Then again, last year, the Chants led at Arkansas 38-25 with 10 minutes left before falling 39-38.
"I don't think either one has anything to do with what's coming on Saturday," Moglia said.
___
Things to watch when South Carolina plays Coastal Carolina:
MOGLIA'S BACK: It will be the return to the sidelines for Chants coach Joe Moglia , the former TD Ameritrade chairman who's been at Coastal since 2012. He stepped away last summer with a respiratory issue as the Chants went 3-9. He came back in January and has worked to correct the problems of last season.
RUNNING GAME: South Carolina has not had much of a rush in coach Will Muschamp's first two seasons. However, the coach and running backs coach Bobby Bentley said the quartet of Rico Dowdle, A.J. Turner, Ty'son Williams and Mond Denson have been healthy and effective in the new attack.
FRESH FIELD: Williams-Brice Stadium got a fresh, new field last weekend after a stop by Jay-Z and Beyonce for a concert on Aug. 21. The school found all the turf was damaged from both the concert set and those among the 40,000 fans who filled the field for the show. Gamecocks coach Will Muschamp brushed off concerns about how the recently laid turf would hold up. "We had a plan for this," he said. "I know this shocks people, but we actually had a really good plan."
COASTAL COMEBACK: The Chants had gone 51-15 including 10-2 as an FCS independent since Moglia arrived before its losing season last fall. The ultra-detailed Moglia has identified factors like poor tackling and subpar special teams play as problem areas from a year ago. If those get fixed, Moglia believes Coastal will be in the hunt for a bowl game.
SHIFTING SECONDARY: South Carolina is counting on a secondary with some untested pieces to pull together in a hurry. The lineup includes freshman Jaycee Horn as a starter in five defensive back lineups and grad transfers Nick Harvey (Texas A&M) and J.T. Ibe (Rice) will play just about everywhere.
___
More AP college football: https://apnews.com/tag/Collegefootball and https://twitter.com/AP_Top25