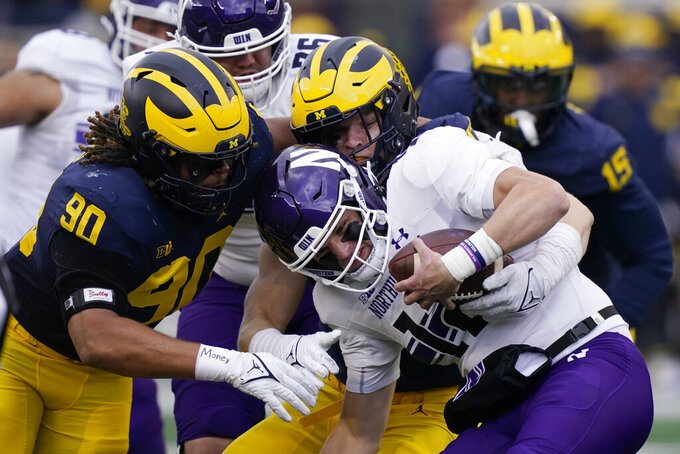 LINCOLN, Neb. (AP) — For all the drama of Illinois' nine-overtime win at Penn State, the game was illustrative of the difficulties many Big Ten teams are encountering when their offenses get near the goal line.

The Big Ten’s 14 teams have combined for the conference's lowest scoring rate in at least 10 years in the red zone, the area inside the opponent's 20-yard line.

The Illinois-Penn State overtimes were marked by passes overthrown, underthrown, dropped and broken up, and runs that got stuffed, before Brandon Peters connected with Casey Washington to produce the Illini's 20-18 win.

“It is definitely a great example of how difficult it can be to score and get quality plays down there," Nebraska quarterback Adrian Martinez said.

Just past the midway point of the season, Big Ten offenses have scored on 80.6% of their trips inside the 20, including touchdowns on 55.6%. Both marks are lowest among the Power Five conferences and, among the 10 Football Bowl Subdivision leagues, only better than Conference USA’s rates of 80.4% and 50.4%, respectively.

The degree of difficulty naturally increases as an offense approaches the end zone because the field becomes compacted vertically; there is is simply less room within which to stretch a defense. Martinez said that's magnified in the Big Ten because most of the teams have strong defenses and the general offensive style lends itself to fewer possessions.

“You have to execute and be precise on the details," Martinez said. “There’s already less room for error in the Big Ten, and so in the red zone that margin for error is even smaller.”

Wisconsin defensive coordinator Jim Leonhard said stopping the run is an emphasis across the Big Ten, and that plays a big role. Ohio State leads the nation in red-zone rushing at 5.5 yards per carry, but seven Big Ten teams are averaging less than 2.5 inside the 20.

“When teams aren’t 100% confident in their quarterbacks, it’s going to limit what you do in the passing game once the field shrinks,” Leonhard said. “I would say that's good defense — strong, consistent, not giving up cheap plays and stopping the run — and really forcing teams to execute in limited space down there, which some quarterbacks are not comfortable doing.”

Spread offenses are prone to struggling in the red zone, Leonhard said, because they are accustomed to working in space.

“You get down in the red zone and that changes a lot,” he said. “Any time you can make teams one dimensional it helps you out on defense and I think that’s the one constant a lot of defenses in the Big Ten are doing, forcing teams to throw the football, forcing teams to execute on the perimeter of the defense rather than running for touchdowns.”

Nebraska might own the biggest red-zone failure this season in its 30-23 loss at Minnesota on Oct. 16. Trailing 21-16 in the third quarter, the Cornhuskers failed to score on three chances starting from the Minnesota 2. After Rahmir Johnson's run to the 1, Martinez was stopped short on third down and Jaquez Yant slipped and fell well short of the goal line on fourth.

The Cornhuskers run a spread offense, and Martinez was in the shotgun for all the snaps instead of under center when the Huskers were nearly on top of the goal line — a decision criticized by fans and media.

Indiana couldn't get into the end zone after long drives in a 20-15 loss to Michigan State. Same with Rutgers in a 31-13 loss to the Spartans. Iowa got neither a field goal or touchdown on four of five red-zone opportunities in its 24-7 loss to Purdue.

Northwestern, which ranks last in the Big Ten and 128th nationally in red-zone scoring, has lost three fumbles inside the 20 and two others inside the 30.

Minnesota has had success in the red zone, running on four of every five plays in what coach P.J. Fleck calls the “green zone” and averaging nearly 4 yards per carry.

The Gophers have converted on 16 of 17 opportunities since Sept. 18, with nine of 12 touchdowns scored on run plays. For the season, the Gophers are getting points 91.7% of the times they're in the red zone and they've scored touchdowns on 75%.

“It’s just being able to have a mind-set and stick to what you really do well and be consistent," Fleck said.

Of the eight teams at the bottom of the conference in red-zone scoring, only Iowa and Purdue have winning records. The top six red-zone teams are all above .500.

“Everybody says it’s a game of inches, yes, but it’s a game of situations,” Fleck said. “How good teams are in the green zone can be directly correlated to how well they do at the end of the year with their record.”