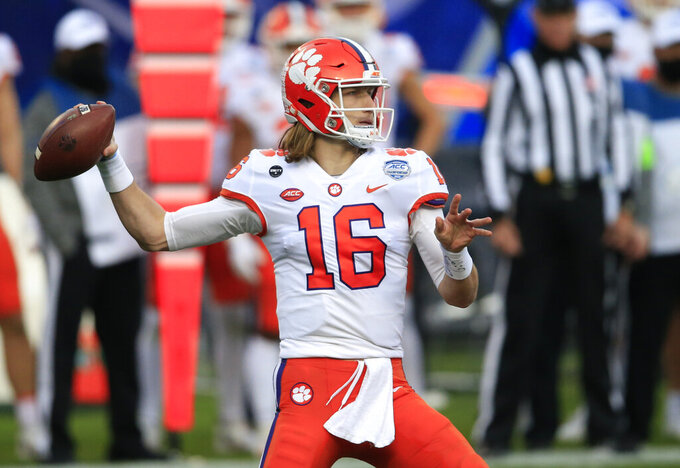 NEW ORLEANS (AP) — Everybody loves a comeback story, and both No. 2 Clemson and No. 3 Ohio State arrive at the Sugar Bowl looking for redemption of sorts.

For Trevor Lawrence and the Tigers, this College Football Playoff semifinal brings them back to the site of last season's national championship game loss to LSU.

For Justin Fields and the Buckeyes, the Sugar Bowl is a chance to avenge their last defeat, a thrilling semifinal against Clemson last year that effectively ended with Ohio State's star quarterback being intercepted in the end zone.

“You’ve got to face a little bit of adversity and sometimes you’re a little bit blinded by success if you don’t have any hiccups along the way," Lawrence said this week.

Clemson (10-1) and Ohio State (6-0) meet in the playoff for the third time on Friday night, with the winner moving on to the national championship game against either No. 1 Alabama or No. 4 Notre Dame on Jan. 11 in suburban Miami.

Clemson has won both the previous CFP meetings with Ohio State. Throw in an Orange Bowl with the Buckeyes that the Tigers also won in 2014 and Ohio State-Clemson feels like a budding rivalry.

It certainly sounded like one at times leading up the game, starting with Clemson coach Dabo Swinney's insisting that Ohio State's six-game schedule in this pandemic-altered season should not have been enough to earn a playoff spot.

Swinney slotted Ohio State 11th in his final coaches' poll ballot, explaining he didn't put any team with fewer than nine games in the top 10 — while also showering praise on the Buckeyes and coach Ryan Day.

"So people take it personal, but it’s nothing personal at all," Swinney said.

Day admitted with a grin on a Zoom news conference with Swinney this week that he was glad his counterpart wasn't on the College Football Playoff selection committee.

The Buckeyes have heard the complaints about their path to the playoff.

Rivalry? The Tigers do not seem to have really bought into the idea.

“They have more beef with us than we have with them,” Clemson receiver Amari Rodgers said.

It has all made for an interesting subplot to a game that will almost certainly be the final one in college for the losing junior quarterback. Lawrence and Fields, both Georgia natives and former five-star recruits in the same freshman class, are expected to be among the first few players selected in the 2021 NFL draft.

Lawrence is a Heisman Trophy finalist and the presumptive No. 1 overall pick. He led the Tigers to a national championship as a freshman and got them back to the title game last season. Clemson is 34-1 with Lawrence as the starter.

“He’s as good as there’s ever been," Swinney said. "I’ll let other people argue if he’s the best ever.”

Fields was a Heisman finalist last year and followed that up with a mostly excellent performance in the playoff. In the first game he and Lawrence ever played against each other, Fields passed for 320 yards. His final throw was picked off in the end zone after the intended receiver slipped.

Clemson won 29-23 in a game Ohio State led 16-0 that featured a couple of critical close calls by the officials that went the Tigers way.

Clemson will be without offensive coordinator and play-caller Tony Elliott, who is in COVID-19 protocol and did not make the trip to New Orleans.

Swinney said quarterbacks coach Brandon Streeter will fill Elliott's role in the coach's box. Former Clemson star C.J. Spiller, who has been working as an intern under Elliott, will be elevated to running backs coach and be on the sideline.

Swinney said two players did not make the trip Wednesday to New Orleans, one walk-on and one scholarship player, but did not identify them.

As for Ohio State, they were scheduled to leave Columbus on Thursday after one more round of COVID-19 testing. The Buckeyes have been without numerous players their last two games because of virus protocols, though star receiver Chris Olave is expected back in the lineup.

Nolan Turner, the Clemson safey who picked off Fields a year ago, will not play the first half of the Sugar Bowl after being ejected for targeting in the second half of the Atlantic Coast Conference championship game against Notre Dame. Sophomore Joseph Charleston will get increased playing time with Turner unavailable.

Because of COVID-19 restrictions, only 3,000 fans are expected to be in attendance at the Superdome. Attendance for last season's title game with LSU and Clemson was 76,885.