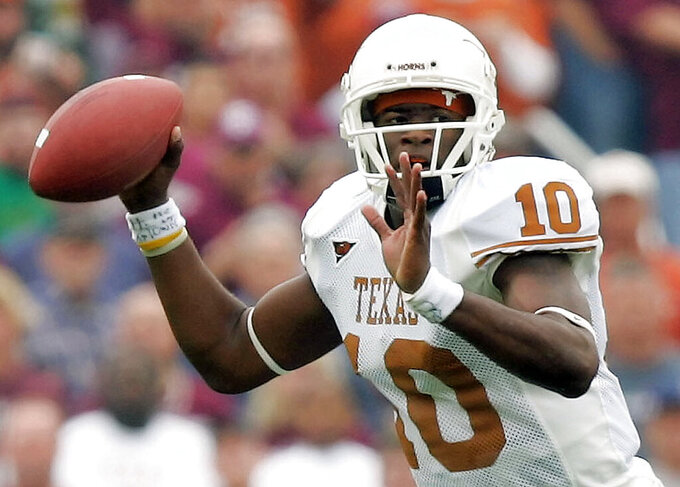 FILE - In this Nov. 25, 2005, file photo, Texas quarterback Vince Young looks to throw a pass against Texas A&M during the first quarter of an NCAA college football game in College Station, Texas. Texas has hired former Longhorns quarterback Young as a special assistant in the athletic department, bringing the College Football Hall of Famer back to the program after he was fired in 2019. Young led the Longhorns to the 2005 season national championship with a last-minute touchdown against USC, before turning pro with an $25 million NFL contract. (AP Photo/David J. Phillip, File)

The College Football Hall of Famer was rehired by the program in December and returned to campus Jan. 4. Texas released his employment agreement Wednesday under a public records request.

The document said Young would report to athletic director Chris Del Conte but did not include any specific job duties. The job is subject to annual renewal.

Young returns to campus at a time the program is trying to build momentum behind new head coach Steve Sarkisian.

Young led the Longhorns to the 2005 season national championship with a last-minute touchdown against USC. Sarkisian was an assistant on that Trojans team.

After his NFL career ended, Young filed for bankruptcy and he returned to Texas in a full-time, $100,000-a-year job as a career development officer in the school’s Division of Diversity and Community Engagement. The job later became part-time and Young was eventually dismissed for poor performance and often being absent from work or not in touch with his supervisors.