UCLA looks to continue momentum against No. 16 LSU 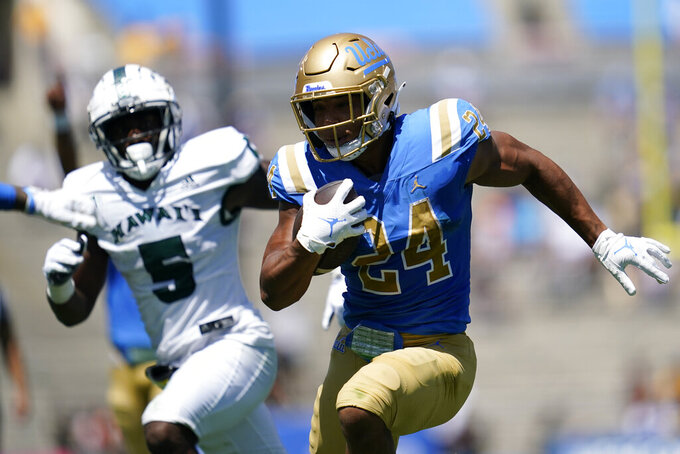 UCLA Bruins running back Zach Charbonnet (24) runs to the end zone for a touchdown during the first half of an NCAA college football game against the Hawaii Warriors Saturday, Aug. 28, 2021, in Pasadena, Calif. (AP Photo/Ashley Landis)

GAME OF THE WEEK: UCLA (1-0) hosts No. 16 LSU in a prime-time game at the Rose Bowl. This is the first meeting between the programs. The Bruins rolled to a 44-10 victory over Hawaii last Saturday as Chip Kelly got his first nonconference win as UCLA's coach. Running back Zach Charbonnet, a Michigan transfer, scored three touchdowns in his six carries and gained 106 yards. LSU coach Ed Orgeron is 1-0 against the Bruins after beating them in 2013 when he was Southern California's interim coach. The Tigers, 5-5 last season after winning a national championship in 2019, relocated to Houston on Sunday morning before Hurricane Ida made landfall. LSU practiced at the home of the Houston Texans before heading for Los Angeles.

MATCHUP OF THE WEEK: Arizona opens the Jedd Fisch era against BYU in Las Vegas. Fisch, who spent the last two seasons as an NFL assistant, looks to rebuild a program that has dropped 12 straight games and hasn't won since Oct. 5, 2019. Fisch brought in 17 transfers from FBS programs who have combined to start 81 games. BYU will face five Pac-12 opponents this season, including three straight to start the season. After Zac Wilson was selected No. 2 overall by the New York Jets in April's draft, the Cougars had an intense QB battle with Jaren Hall winning the spot.

INSIDE THE NUMBERS: This is the second straight season Colorado goes into its opener without a quarterback on the roster who has started a game at the college level. Second-year freshman Brendon Lewis, who was 6 of 10 for 95 yards in relief in last year's Alamo Bowl, will get the start against Northern Colorado on Friday night. ... Oregon State goes into Saturday's opener at Purdue as one of just 16 teams nationally with three or more quarterbacks who have started at least one game at the FBS level. Sam Noyer, who started six games at Colorado last season, will be the Beavers' starter. ... No. 11 Oregon has won 16 straight home openers while averaging 57.0 points going into Saturday's game against Fresno State (1-0). ... No. 20 Washington, which hosts Montana, has gone 75 games in a row without allowing an opponent to score more than 35 points, the longest such streak in the nation. ... USC has a 19-game winning streak against Mountain West Conference opponents on the line against San Jose State (1-0). ... Cal is 9-0 in regular season nonconference games during Justin Wilcox’s tenure, but the Golden Bears have dropped their last two against Nevada, their opponent this weekend.

PLAYER TO WATCH: Washington State running back Max Borghi is the only player in the country named to both the Doak Walker and Biletnikoff award watch lists. The senior has caught a pass in 27 straight games, tied for the eighth-longest active streak in the country, going into the Cougars' game against Utah State on Saturday night.

UPSET WATCH: Stanford vs. Kansas State in the Allstate Kickoff Classic in Arlington, Texas. The Cardinal are the only team in the country whose entire schedule is against Power Five programs. They don't have an easy start with the first three on the road and with the quarterback spot unsettled. Coach David Shaw said senior Jack West and sophomore Tanner McKee will both play against the Wildcats. Kansas State's Skylar Thompson is ready to make his 31st start, but he played in just three of 10 games last season after suffering an upper-body injury.