UCLA sees template for turnaround in No. 10 Washington 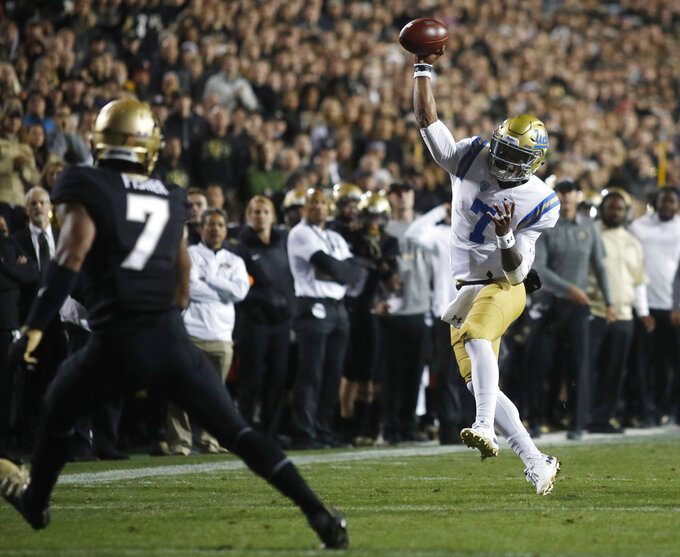 UCLA quarterback Dorian Thompson-Robinson, back, rolls out to throw a pass over Colorado defensive back Nick Fisher during the first half of an NCAA college football game Friday, Sept. 28, 2018, in Boulder, Colo. (AP Photo/David Zalubowski) 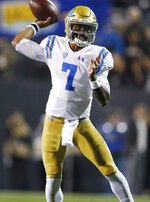 LOS ANGELES (AP) — Winless UCLA wants to be where No. 10 Washington is, contending for Pac-12 titles and berths in the College Football Playoff.

Though finding their breakthrough victory against the Huskies on Saturday night might be like the longest of long shots, the Bruins seem to have the right attitude necessary to achieve their long-term goal.

"We have to just focus on ourselves," UCLA linebacker Tyree Thompson said. "I feel like we're stopping ourselves right now, so once we get ourselves down it's not going to be much of a challenge. Just focus on us."

UCLA (0-4, 0-1 Pac-12) is in the first year of rebuilding under coach Chip Kelly, but Washington (4-1, 2-0) will provide a firsthand example that such reclamation projects can produce results. The Huskies went from a mediocre 15-11 record in coach Chris Petersen's first two seasons in charge to winning the conference and appearing in the CFP semifinal at the Peach Bowl in his third season.

The commitment to make such a turnaround happen can be trying, Petersen said, but requires complete buy-in.

"You just got to stick to your script," Petersen said. "Everybody has their way of what it's going to look like, and there are hard decisions along the way. Sometimes you got to just keep recruiting your guys to get in. It can be hard on guys you didn't recruit because things are a little bit different than how they were recruited in.

"It can be a tough process, and there's not any one thing. It's everything, and it takes time."

Kelly, who never lost consecutive games in the same season during his four seasons as the head coach at Oregon, does not appear to be deviating from his approach while going through the longest stretch of his college career without a win. Practices dictate playing time in games, as redshirt junior Joshua Kelley showed in a 38-16 loss at Colorado.

The transfer from UC Davis turned a strong performance during UCLA's open week into 124 yards rushing on 12 carries against the Buffaloes.

"It's who has consistently been doing what he needs to do, so that's a credit to Josh because he didn't play very much against Fresno but instead of sulking and hanging his head, he went out and went to work and those last two weeks, he rose above those guys," Kelly said.

Here are some other things to watch as Washington looks to end an eight-game losing streak to UCLA at the Rose Bowl:

GAINS VS. GAINES: UCLA rushed for a season-high 151 yards against Colorado, but building on that success will be difficult against a Washington run defense led by senior tackle Greg Gaines that is allowing 3.59 yards per carry. "In that game, I felt like every time we ran the ball it felt like there were holes. I think we were moving our guys, and it's just a good feeling," UCLA left guard Michael Alves said.

FRESHMAN FOCUS: Freshman quarterback Dorian Thompson-Robinson is expected to make his fourth consecutive start for the Bruins, having completed 58 of 110 passes for 660 yards with three touchdowns and two interceptions since replacing Wilton Speight in the season opener against Cincinnati because of injury. While Thompson-Robinson might be the face of UCLA football for years to come, Petersen believes relying on a first-year quarterback to set the tone for a program in transition might be too much to ask, pointing to his own experience when Browning started as a freshman in Petersen's second season at Washington. "His freshman year, all you're trying to do is do your job and stay one step ahead of what you're learning that day," Petersen said.

BEST OF THE BEST: Kelly, Petersen, and Ohio State's Urban Meyer are the only active coaches to have won at least 80 percent of their games with at least four seasons in the FBS. Petersen has a record of 133-30 in 13 seasons at Boise State and Washington, and Kelly is 46-11 in five seasons at Oregon and UCLA. However, Kelly's career winning percentage would drop to 79.3 if UCLA loses to Washington.

NOT HIS JOB: Washington is the second CFP contender UCLA is playing this season, after losing 49-21 at No. 7 Oklahoma in Week 2, but don't ask Kelly to evaluate how the Huskies stack up to the Sooners. "We're wasting time and energy if I try to say how does Washington compare to Oklahoma," Kelly said on the Pac-12 teleconference Tuesday. "I don't really care how Washington compares to Oklahoma. I don't vote in the polls. I just need to get ready for a really good Washington team."

By The Associated Press 31 minutes ago
By Steve Reed 3 hrs ago
By Ralph D. Russo 10 hrs ago
12 hrs ago
By Eric Olson 13 hrs ago