USC hopes break will lead to defensive improvement vs UCLA 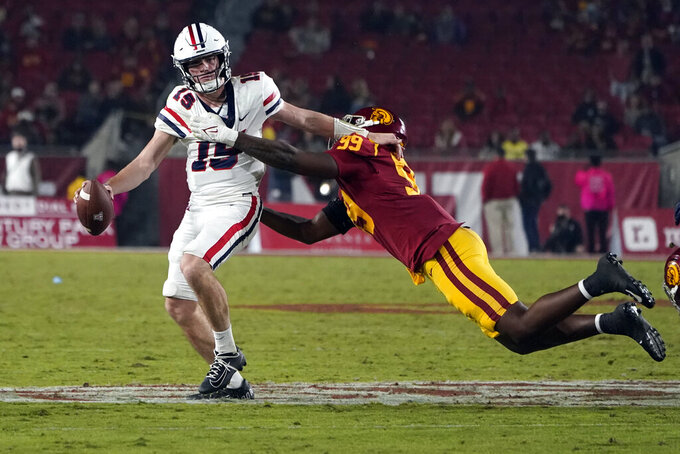 The Trojans got a reprieve, albeit under unusual circumstances when their road game at California last week was postponed because of a COVID-19 outbreak within the Golden Bears.

Now, Orlando and USC’s beleaguered defense have to show they made the most of their unplanned open week against crosstown rival UCLA on Saturday.

“To be able to decompress a little bit, I think that’s been, mentally, very healthy for us,” Orlando said. “We see just a team that’s just carrying themselves a little bit better than what you would normally see on a team that’s been through the grind going into almost December right now.”

It has been anything but a normal season for USC (4-5, 3-4 Pac-12), which came into the season expecting to return to the conference title game but is now trying to avoid the indignity of a second losing season in four years.

Clay Helton was fired as head coach in September after two games. However, his dismissal could not prevent historic home defeats to Oregon State and Utah, with the defense bearing the brunt of responsibility for allowing too many rushing yards and explosive pass plays.

Those are areas where the Bruins (6-4, 4-3) have thrived. They have a three-faceted run offense that is averaging 203.9 yards per game with quarterback Dorian Thompson-Robinson and tailbacks Zach Charbonnet and Brittain Brown. Tight end Greg Dulcich had a 69-yard touchdown catch against USC last season, and wide receiver Kyle Philips is equally adept at creating separation.

“That’s a challenge we want,” outside linebacker Drake Jackson said. “We take all challenges, so, really, we see it as something that we want to go after.”

Poor tackling, undisciplined play, and injuries have been constants.

So Orlando used practice time that would have been focused on preparing for Cal to try to fix the fundamentals that have been lacking.

The extra week allowed USC to get healthier while continuing to integrate younger players, such as safety Xavion Alford, a redshirt freshman transfer from Texas who will start after intercepting two passes against the Sun Devils, and defensive lineman Maximus Gibbs.

Gibbs started his freshman season on offense, but a lack of big bodies in the middle of the defense resulted in the 6-foot-7, 390-pound behemoth switching to the other side of the ball. Orlando originally envisioned Gibbs being used on a handful of plays where space would be at a premium, but that workload has gradually expanded and he got his first tackle for loss against Arizona State.

“Anybody can sit on top of the center and beat him up. But now we ask him to do some things that we want pressure-wise and movement-wise, and he’s able to do it, which is good, and he feels good about it,” Orlando said. “We were probably 75% sure that this would work, but now he’s made us a true believer, so that’s the really cool part about it.”

Having to experiment with the likes of Gibbs indicates what a struggle it has been for this USC defense. No one will mistake this iteration with the best units in school history, but cornerback Chris Steele recognizes that a strong performance against UCLA would offer some redemption.

“If we go 1-0 this week, I think a lot of people will be happy, especially if we do what we’re supposed to do,” Steele said. “I think we should reach out to some happy campers this weekend for sure.”