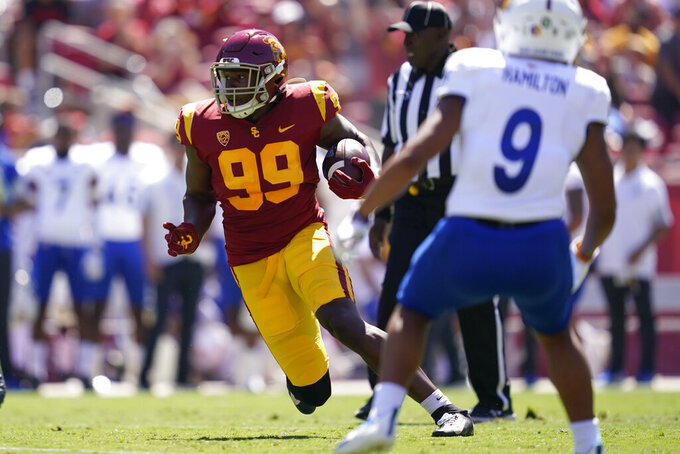 LOS ANGELES (AP) — Junior outside linebacker Drake Jackson’s “money year” got off to a slow start as he failed to record a sack in the first two games of what he has said will be his final season at Southern California before declaring for the NFL draft.

With Washington State backed up against its own goal line last Saturday, Jackson had one thought as he lined up in a three-point stance.

“Go get paid,” Jackson said. “Go get paid. It’s been many times where I beat the tackle and the ball is out, so I just had to make sure I get there before the ball got out.”

Jackson exploded past left tackle Liam Ryan into the end zone and chopped at quarterback Victor Gabalis’ right arm to knock the ball loose. Defensive tackle Tuli Tulipulotu fell on it for a touchdown, putting the Trojans up 28-14 and effectively putting away the Cougars in what would be a 45-14 win.

It might also be the sequence that sparks Jackson to finally produce at a level on par with his prolific physical abilities. Nicknamed “The Freak” by his teammates for his spectacular athleticism, Jackson can do backflips at 6-foot-4 and 250 pounds.

However, he has yet to become the dominant pass rusher USC has sorely needed, with 8 1/2 sacks among his 19 tackles for loss in 20 games. The takedown of Gabalis was just Jackson’s second forced fumble.

Defensive line coach Vic So’oto said Jackson’s lack of production prior to playing Washington State, and with it USC’s failure to record a sack through its first two games, was the result of a combination of how opponents are using quick throws against them and bad luck.

“When you talk about sacks, a lot of it is the quarterback’s gotta have the ball,” So’oto said. “Drake, I don’t even think that was his best rush of the season, you know. He had some really good rushes the first and second game, but this one just happened at a great time and the quarterback had the ball.”

There is also the question of Jackson’s positioning. Though he can drop into coverage when needed, he seems to be a more natural defensive end as his sack came with his hand on the ground.

So’oto gives his pass rushers the freedom to line up however they want and Jackson and others began changing things up in the second half to better attack Washington State’s tendencies.

“It’s get off the ball as fast as you can. And what’s your favorite thing to do? Well, let’s put that into what we do and not limit guys from what they’ve done their whole life,” Jackson said.

Jackson has proven to be a well-rounded contributor. He erupted out of a three-point stance to beat the guard and make a tackle for no gain as part of a goal-line stand in the first half. Both of his interceptions in college have come from the ability to read and react to screen passes.

But taking down the quarterback is what will determine how valuable Jackson can be to NFL teams. Defensive coordinator Todd Orlando believes the pressure to perform has been wearing on Jackson, even if he had been doing everything right except getting sacks.

“He expects to do a lot, and he’s so close to it, but to finally finish one,” Orlando said. “And it was a really good play that got turned into a great play, and that’s what I liked about it because a lot of guys would have just gone through the back of somebody and taken the safety, and he went for the football.”

“Those plays just help confidence because sometimes you get in little bit of a rut,” he added. “And it’s not his fault. It’s just the ball’s been coming out faster than you can get to the QB.”

Jackson intends to keep cashing in against Oregon State on Saturday.

“Never, never need to let up, that’s how it’s supposed to be,” he said.