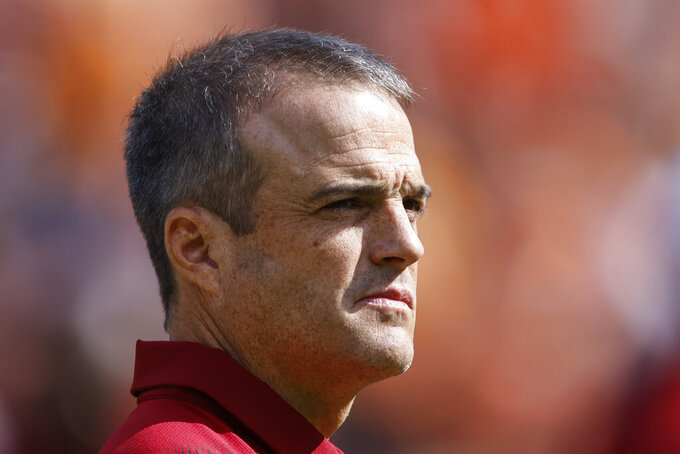 COLUMBIA, S.C. (AP) — There may be debate over the Southeastern Conference's top team this season. After Saturday, though, there should be little doubt about who's at the bottom when Vanderbilt faces South Carolina.

The schools have the two longest league losing streaks. The Commodores (2-4, 0-2 SEC) have lost their last 15 straight in the conference while the Gamecocks (3-3, 0-3) have dropped nine SEC games in a row.

Both programs, under first-year coaches Clark Lea at Vanderbilt and Shane Beamer at South Carolina, are desperate for a streak-busting victory to show players and fans things are trending in the right direction.

“I think it is two teams that are going to be fighting for a win on Saturday that have experienced varying levels of disappointment,” Lea said. “But also are improving and finding identity through the year.”

Right now, the identity for the two is continuing struggles against the SEC.

Vanderbilt's last conference victory was almost two years ago, a 21-14 home win over Missouri . It lost its final four SEC games of 2019 and then went 0-9 (it had a game canceled last December) in the all-SEC, COVID-19 season of 2020 . That led to the school ditching Derek Mason in favor of Lea, a former Notre Dame defensive coordinator.

South Carolina started 2020's SEC-only schedule 2-2, including an upset of then-ranked Auburn at home. Things turned ugly for the Gamecocks soon after as they lost their final six games — most by sizeable margins.

Gamecocks coach Will Muschamp was dismissed at midseason. Beamer was hired last December.

Most give South Carolina an edge since it's won the past 12 games in the series, dating back to 2008 when Beamer was a Gamecocks assistant to coach Steve Spurrier.

Beamer made sure his players understand they can't ease up on preparation simply because of past success over the Commodores.

“They're a very good team and somebody you can't take lightly, no matter what's said about them in the SEC,” South Carolina tight end Nick Muse said.

Some other things to watch for when Vanderbilt plays South Carolina:

The Commodores has already snapped several losing streaks this season. Vanderbilt ended an 11-game overall skid this season with its win at Colorado State, which also broke a 10-game road loss streak. The Commodores ended an eight-game home skid by beating UConn.

Shane Beamer won't ever escape his father, Frank's, large football shadow. The two were linked in a less flattering way on social media as Shane Beamer celebrating a South Carolina touchdown trailing Tennessee 38-7 last week was put alongside dad Frank Beamer's smiling face as a Virginia Tech-Wake Forest game ended regulation at 0-0. A friend sent the meme to the younger Beamer, who laughed. “I'm never not going to celebrate when we score,” he said.

Vanderbilt picked off two passes in the loss to Florida, giving the Commodores consecutive games with multiple interceptions. It’s the first time since 2018 that Vanderbilt has managed to come up with more than one interception in back-to-back games.

South Carolina's offense, 13th out of 14 SEC teams in points scored and yards gained, and the play-calling of first-year offensive coordinator Marcus Satterfield came under question after an early trick play went wrong in a 45-20 loss at Tennessee last week. South Carolina quarterback Luke Doty said Satterfield is making the right calls and has the team's confidence.

South Carolina and Vanderbilt are going in different directions with turnovers. The Gamecocks are among the SEC surprises this season with 12 takeaways, including a league best nine interceptions. The Commodores have turned the ball over 14 times in their five games.