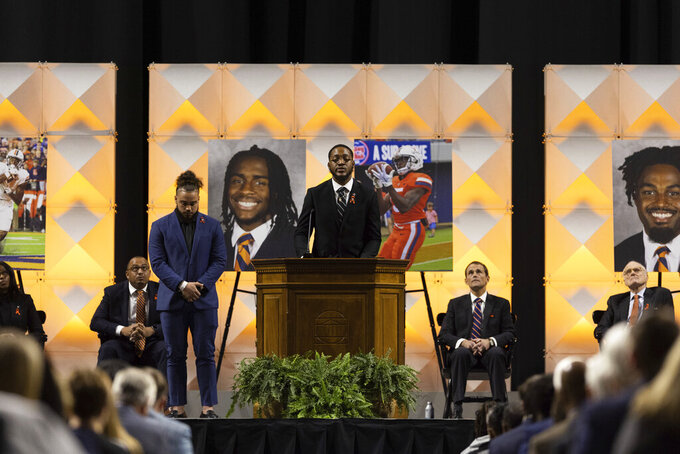 A football player speaks to a crowd during a memorial service in Charlottesville, Va., Saturday, Nov. 19, 2022. Over a nine thousand students and locals attended the service at John Paul Jones Arena to honor three student football players who were killed on Sunday, Nov. 13, 2022. (Mike Kropf/The Daily Progress via AP)

The University of Virginia has canceled its game against rival Virginia Tech scheduled for Saturday following the slaying of three football players on campus just over a week ago.

The university made the announcement Monday night, two days after a nearly two-hour memorial service to remember Lavel Davis Jr., Devin Chandler and D'Sean Perry. The three were fatally shot on Nov. 13 after a field trip to see a play in Washington.

Authorities have said that Christopher Darnell Jones Jr., a UVA student and former member of the football team who was on the trip, began shooting at students on the bus as it pulled to a stop at a campus parking garage.

A prosecutor said in court last week that a witness told police the gunman targeted specific victims, shooting one as he slept. Two other students were wounded.

Jones, 23, faces second-degree murder and other charges stemming from the shooting, which set off a manhunt and 12-hour campus lockdown before Jones was apprehended in suburban Richmond. Jones is being held without bond.

Authorities have not released a motive.

The Hokies, who endured a massacre that left 33 dead, including the gunman, in 2007, wore orange uniforms as they ended a seven-game losing streak with a 23-22 victory at Liberty on Saturday. The Hokies and Virginia share orange as a signature color.