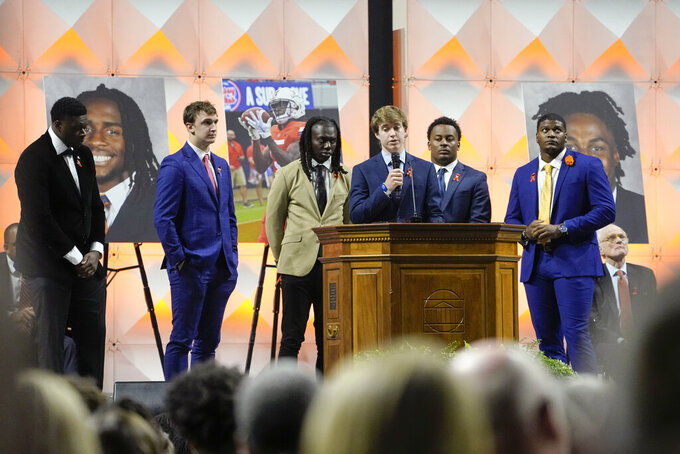 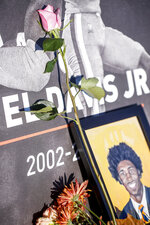 Lavel Davis Jr., D’Sean Perry and Devin Chandler were remembered during a memorial service in Charlottesville as great teammates who wore constant smiles and sought to brighten the lives of those around them, from fellow players to other students and fans.

“Only time will reveal God’s purpose in this adversity. ... Going forward I’m confident that all three are rejoicing in paradise, speaking good things on behalf of each of us in preparation for the time we will all be together again,” first-year head coach Tony Elliott said.

To the family members and friends seated in the first two rows, Elliott added: “I am grateful for your willingness to share your family’s gifts with all of us.”

Athletic director Carla Williams shared stories she heard this week from family members of the players and said the tragedy “has pushed me to my limits.”

“We are better and will do better because we will make sure their legacies never fade at the University of Virginia,” she vowed, telling the families, “We loved your sons.”

The service at John Paul Jones Arena came on a day when the Cavaliers had been scheduled to play No. 23 Coastal Carolina, but opted instead to honor their fallen teammates as well as injured player Mike Hollins and another student who was shot.

Among the presenters was Grammy-winning gospel singer Cece Winans, who the school said asked to take part. She sang “Goodness of God.”

Perry was “destined to be great in everything he did,” defensive tackle Aaron Faumui said. He added that Perry often reminded him that “life was more important than football.”

In a letter to Chandler, who Williams referred to as “a dancing machine,” Cody Brown told him that “you lit our lives up like a shining star in the sky” and said, “We love you so much and know you’re smiling down on us from heaven.”

Coach Marques Hagans said Davis was humble with a radiant smile and “determined to be a great example for his younger sister and brother.”

Teammate Chico Bennett offered a message for Hollins and Marlee Morgan, the injured student, neither of whom was in attendance: “We love you. We got you. The journey begins.”

Kicker Will Bettridge shared that once, on the sideline, Perry told him he was going to tell his child to play that position because kickers have so little to do.

“A piece of my life was taken from me and from the Cavaliers community,” Bettridge said.

University president Jim Ryan said the shootings “changed our world” and while he and others will mourn the games that the students will never get to play, “we will find strength again together.”

The players were killed last Sunday after a field trip to Washington, D.C. Former Virginia football player Christopher Darnell Jones Jr. is faces three counts of second-degree murder and other charges. The shootings set off a manhunt and 12-hour campus lockdown before Jones was apprehended.

The suspect was never mentioned during the nearly two-hour service.

Mourners were allowed in an hour before the scheduled start of the service and heard musical performances from school choral groups and the MLK Community Choir. Photos of the players as children and in action on the field scrolled across the video board.