Wacky week for Washington ends up in matchup vs. Utah 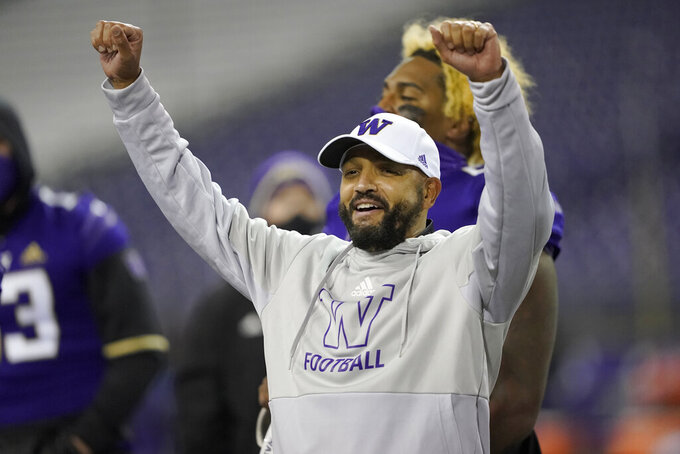 SEATTLE (AP) — At one point this week, Washington coach Jimmy Lake had four different depth charts sitting on his desk, none of them belonging to the Huskies' originally scheduled opponent.

The Huskies have been riding out a roller coaster week that began with its rivalry game against Washington State getting postponed. Next came hours of rumors and some bickering about a matchup with No. 8 BYU. That was followed by conjecture about potential nonconference opponents in either San Diego State or Army, and eventually a conclusion Tuesday night when the Pac-12 announced the Huskies would host Utah on Saturday night in Seattle. The Utes' previously scheduled game against Arizona State was canceled.

“There was definitely some discussions for multiple teams. Definitely a new thing in 2020 that usually we know who we’re playing week in and week out and this year we do not,” Lake said Wednesday. “But our team didn’t flinch and they were ready to play whoever we were going to play.”

Washington wasn’t alone in a week of unknowns. Vanderbilt had its rivalry game against Tennessee shifted — likely to the end of the season — so the Commodores could make up a previously postponed game against Missouri this week.

And Washington is relatively fortunate it had most of the week to prepare for Utah compared to the 48 hours UCLA and California had to prepare for a last-second schedule change and matchup a couple of weeks ago.

Lake said his staff had already put in prep work on Washington State but that talk started to develop even before Washington’s game last Saturday against Arizona that the Apple Cup could be facing a postponement.

“There was definitely some potential games that we were trying to get ahead of that we felt would replace the Apple Cup this weekend,” Lake said. “So I guess from here moving forward, if we do get some forward advance that the next game is a potential postponement or cancel, we will definitely have to make this a weekly routine.”

Lake said Washington made an educated guess and had a full practice Tuesday believing Utah would be the Huskies' eventual opponent. That meant the Huskies spent the normal amount of practice time preparing for the Utes.

He was also quick to thank his staff for being flexible during the period when Washington didn’t know who it would play.

“Our quality control coaches and our graduate assistants, they did a lot of grunt work on all the other teams and we would have had some game plans ready to go for those teams as well if that was going to take place,” Lake said.

While the Apple Cup was postponed, Lake is hoping there will be a chance to play the rivalry game later in the season. The Pac-12 has not set games for Dec. 19, the day after the Pac-12 championship game. Lake said it would be his preference to play Washington State on that weekend if neither team is playing in the conference title game.

“If we were not in the Pac-12 championship game, definitely I think that last game there should be the Apple Cup,” Lake said. “I know our fans and their fans and our whole state, whole region would want that game to happen.”