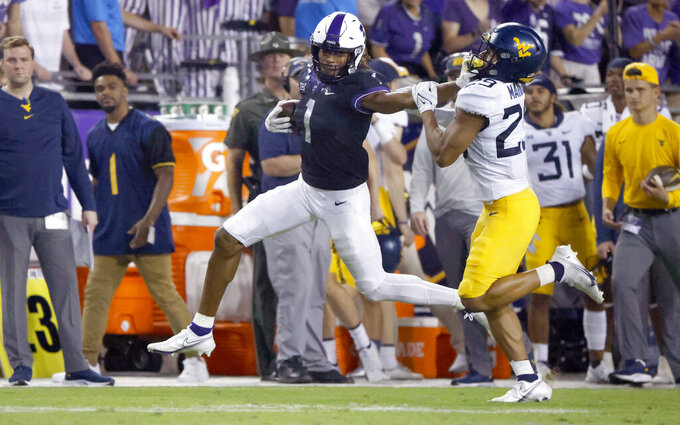 TCU wide receiver Quentin Johnston (1) stiff-arms West Virginia safety Sean Mahone (29) after making a catch for a first down during the first half of an NCAA college football game Saturday, Oct. 23, 2021, in Fort Worth, Texas. (AP Photo/Ron Jenkins)

FORT WORTH, Texas (AP) — Leddie Brown ran for three touchdowns, and West Virginia overcame Derius Davis' 100-yard return for a score on the opening kickoff in a 29-17 victory over TCU on Saturday night.

Brown's 1-yard plunge put the Mountaineers (3-4, 1-3 Big 12) ahead for good in the second quarter and helped them avoid matching their worst start in Big 12 play since joining the league nine years ago.

Max Duggan threw two interceptions — equaling his total from the first six games — as the Horned Frogs (3-4, 1-3) lost for the fourth time in five games. Three of the losses have been at home. TCU also lost a fumble to end any hopes of a late rally.

Two weeks after getting blown out at Baylor, West Virginia was behind right away in a second consecutive game in Texas after Davis took off from the goal line, veered left around the TCU 35 and outran Sean Mahone down the left sideline.

The Mountaineers, who coach Neal Brown said got a boost mentally from the week off, had an answer.

Jarret Doege, who threw for 257 yards, connected with Sean Ryan on a 44-yarder to set up the first of three field goals from Casey Legg. Brown's first TD, a 5-yarder, gave West Virginia its first lead at 10-7 in the final seconds of the first quarter.

Brown had 111 yards on 24 carries as the Mountaineers finished with 229 yards on the ground after coming in last in the Big 12 at 111 per game. Backup quarterback Garrett Greene had a 67-yard run to set up Legg's second field goal.

Duggan’s interceptions led to West Virginia’s first nine points after halftime when the Horned Frogs trailed 20-17 at the break. TCU was shut out in the second half.

“You’ve got to play good defense. You can’t turn the ball over,” TCU coach Gary Patterson said. “You’ve to manage the game, and defensively you’ve got to get those stops.”

West Virginia: The balance on offense was impressive, and a big factor in bouncing back from the kickoff return. The Mountaineers finished with 487 yards and 24 first downs. “We ran the ball efficiently, and I thought our pass game, we did a nice job,” Brown said. “We didn’t hit any big plays, but I thought again, efficiency’s the key.”

TCU: Zach Evans had 62 yards on 18 carries for TCU, finishing with a 3.4-yard average when he came in third in the country at 7.9 yards per rush. Evans came in as the first TCU back since 2002 with four consecutive 100-yard games. Trailing by 12 with nine minutes remaining, the Frogs went to Evans on fourth-and-2 from the West Virginia 35. Josh Chandler-Semedo dropped him for a 5-yard loss.

A TCU defense that built its reputation by putting pressure on quarterbacks is still having a hard time with sacks this season. The Frogs sacked Doege once after he went down five times among six sacks for Baylor two weeks ago. TCU has just nine sacks in seven games.

The only time West Virginia started 0-4 in the Big 12 was in 2015, but the Mountaineers bounced back to win four in a row. That will be a tougher task with three of the next four opponents being teams that are either ranked now or have been.

West Virginia: Iowa State at home next Saturday after the Cyclones just handed No. 8 Oklahoma State its first loss.

TCU: Kansas State on the road next Saturday. Coach Gary Patterson is 4-5 against his alma mater.