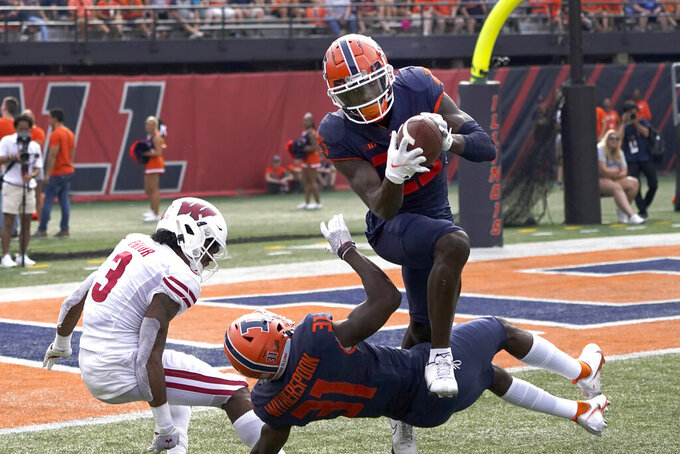 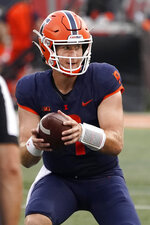 Wisconsin quarterback Graham Mertz was 10-of-19 passing for 100 yards with an interception. The Badgers (2-3, 1-2 Big Ten Conference) outgained Illinois 491-93 yards in total offense.

Coming into the game, Wisconsin ranked third in the nation and led the Big Ten in total defense, allowing just 249 yards per game and allowing just 4.3 yards per play. Illinois (2-5, 1-3) had been showing progress in its running game.

Something had to give. On Saturday, it was the Illinois running game.

“Our defensive coaches put together a good plan to counter the running game," Wisconsin coach Paul Chryst said. “But the kids bring it to life.”

Illinois starting quarterback Brandon Peters was 3-of-7 passing for 30 yards before sustaining an unknown injury while being sacked in the second quarter. Artur Sitkowski replaced him and went 8 of 27 for 55 yards.

After the game, Illinois coach Bret Bielema said he had no update on Peters or star linebacker Jake Hansen, who also left the game in the first half due to an unknown injury.

The Badgers established the run early, scoring on a 17-yard Collin Larsh field goal late in the first quarter to cap an 18-play, 67-yard drive that featured just three passes.

Wisconsin boasts one of the toughest run defenses in the country, and Illinois has one of the best run offenses. But the Illini didn’t run the ball until the first series of the second quarter when Josh McCray rushed for no gain near the Illinois goal line following a Kerby Joseph interception that prevented a Wisconsin touchdown.

“They're a good defensive team, I get that,” Bielema said. “We have some work to do. This was another step in the process. It's not pleasant, but we have to own it.”

Wisconsin outgained Illinois 206-33 in the first half despite Mertz going 3-of-9 passing for 15 yards. Illinois rushed for 21 yards and passed for just 12 before intermission.

Wisconsin tight end Jake Ferguson caught a pass in his 39th straight game, breaking the school record for consecutive games with a reception previously held by wide receiver Lee Evans, who played for the Badgers from 2000-03.

The Badgers won the game on the scoreboard, but it’s clear this is a team struggling to find itself offensively. Chryst and his staff will have to rectify that if Wisconsin wants to compete in the Big Ten West.

“It's obvious we have some things to clean up,” Chryst said. “We'll be working on that this week.”

Illinois coach Bielema was facing his old team and trying for his 100th career coaching win, but his team was listless and ineffective from the opening kickoff. Since the Illini offense didn’t show up, it was up to the defense to try to entertain a large homecoming crowd. The crowd cheered derisively when Illinois got its fifth first down of the game – early in the fourth quarter.

“Gotta give credit to Wisconsin,” Bielema said. “They executed their game plan very well. We have some things to work on.”