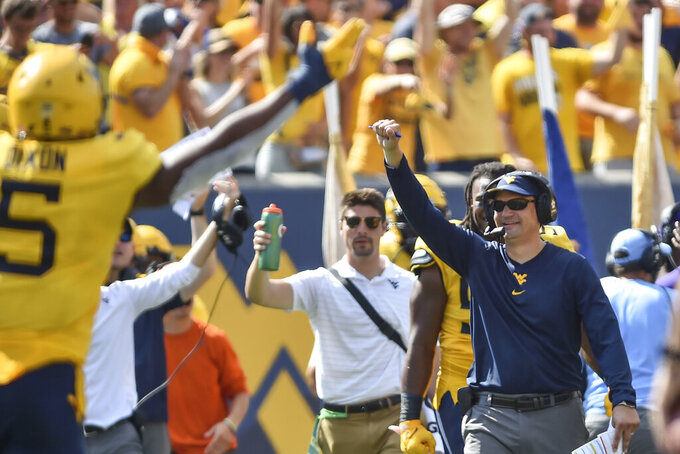 Jared Bartlett’s infectious smile and occasional giggle answering questions after his best game at West Virginia only temporarily masked the pain of his older brother’s hit-and-run death three months ago.

After the death was mentioned by West Virginia coach Neal Brown, the linebacker was asked about Richard Bartlett III at a news conference Tuesday, three days after a three-sack performance in a 27-21 win over Virginia Tech.

“With my brother passing away, it kind of put a lot of things into perspective,” Jared Bartlett said. “Just not taking every day for granted.”

He then paused, admitting the difficulty of the question, before continuing.

“Just trying to live up to his legacy, everything he taught me while he was here.”

According to police in Johns Creek, Georgia, about 25 miles northeast of Atlanta, Richard Bartlett had pulled to the side of a road to secure a mattress on top of a friend’s vehicle when he was struck by another vehicle on June 2. The other driver fled.

In early July, Jared Bartlett stood alongside his family and police to make a public plea for help in identifying the hit-and-run driver. A reward of up to $12,000 is being offered for information that would assist police on the driver’s identity and whereabouts.

When asked what his brother had taught him the most, Barlett said it was showing him how to handle situations.

“His personality and how he approached things,” Jared Bartlett said. “He always looked at things in a positive light. And that’s useful, especially in the game of football.

“When you focus on the negative, it’s hard to improve.”

As a 232-pound hybrid linebacker and edge rusher, Bartlett could use all the help he can get against opposing linemen.

His career-high three sacks Saturday were the most since Darius Stills had three against Baylor in 2019. Bartlett tied a career high with five total tackles and he forced and recovered a fumble, earning him Big 12 defensive player of the week honors.

Brown said Bartlett had a good summer in practice but did not perform well in West Virginia's two games. Then the week of the Virginia Tech game, Bartlett improved considerably.

“You could see he was getting better,” Brown said. "I did feel like he was going to give us more. And he did.

“Tragedy affects people differently. Once that happened, he’s had a renewed focus, kind of a seriousness about his preparation. So I was extremely pleased for him that it paid off in a game situation, much less a rivalry game.”

Brown said Bartlett’s success would not have been possible if not for West Virginia interior linemen, especially Akheem Mesidor, forcing Virginia Tech's Braxton Burmeister out of the pocket.

“The thing that’s really hard is you’ve got to get movement on the interior line,” Brown said. "Jared got those sacks, but those sacks don’t happen if there’s room for Burmeister to move up in the pocket, and there wasn’t.

Bartlett’s older half-brother is Pittsburgh Steelers’ defensive lineman Stephon Tuitt. Bartlett said the pair talk about football as much as possible “so I can grow in my understanding.”

“Usually it starts off with like a little bit of criticism, because that’s how you get better,” Bartlett said. "He tells me what I can do to fix my mistakes, where I can improve and use my skill set to produce the most, be the most productive.”

West Virginia has seen two mobile quarterbacks already in Burmeister and Maryland's Taulia Tagovailoa. They Mountaineers (2-1) will face a better one Saturday in Oklahoma's Spencer Rattler when they play the fourth-ranked Sooners (3-0).

“Well, Rattler’s a great player, so I’m just going to continue doing the things that I do," Bartlett said. "As I continue to watch film throughout the week, I can create a game plan and work from that.”