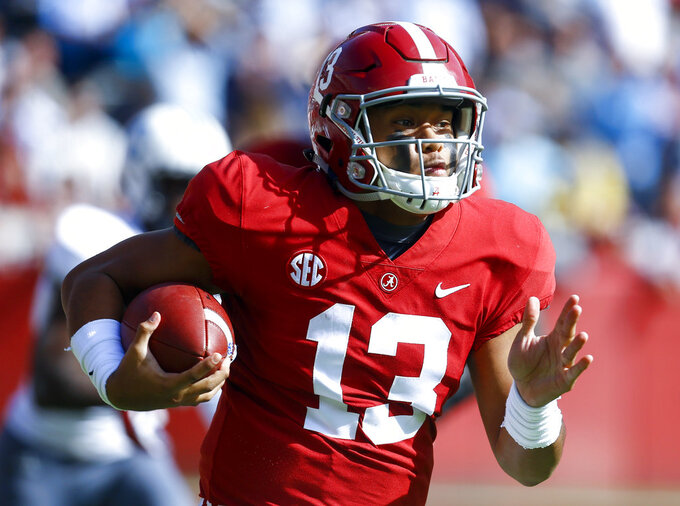 Alabama quarterback Tua Tagovailoa (13) carries the ball during the first half of an NCAA college football game against Citadel, Saturday, Nov. 17, 2018, in Tuscaloosa, Ala. (AP Photo/Butch Dill)

The Associated Press has been honoring college football's best with an All-America team since 1925. The full three-team AP All-America selections will be unveiled in December. The 10th All-America watch of the season features Tua Tagovailoa's stretch run; Michigan State's tenacious defensive end; and an Egg Bowl edge matchup.

The Tua Express slowed in November with two solid — but not spectacular — games against good LSU and Mississippi State defenses. The Tide needed Tagovailoa to play more than most expected against The Citadel and he, of course, fattened up the stats against the FCS team. Much like the Heisman race, the competition for All-America quarterback seems to be down to Oklahoma's Kyler Murray and Tagovailoa — with Washington State's Gardner Minshew and West Virginia Will Grier trailing. Tagovailoa still leads the nation in passer efficiency rating at 212.22 and yards per attempt at 12.1. The sophomore has 31 touchdown passes and two interceptions, and he has run for four touchdowns, though an achy knee has limited that part of his game.

Outlook: Tagovailoa has the Iron Bowl against Auburn and the SEC championship game against No. 5 Georgia to make a strong closing statement versus two top-30 defenses.

Willekes has been one of the leaders of a tough Michigan State defense all season, but he has been especially difficult to block recently — even though the Spartans are a on a two-game losing streak.

Willekes has seven tackles for loss in the last two games and 9½ over his last three. The 6-foot-4, 260-pound junior had a season high 13 tackles against Ohio State and followed it with nine more against Nebraska. The Spartans have managed only 12 points the past two games, so the good work done by Willekes and the defense has not been rewarded.

Dillon was a preseason All-American after a huge freshman season, but a nagging ankle injury has kept him out of two games and limited him in others. He still ranks 10th in the nation in rushing at 116.89 yards per game, but he hasn't topped 5.0 yards per carry in a game since September. In the past three games, Dillon has 251 yards on 77 carries (3.3 yards per carry).

Harvey has been one of the most disruptive players in the country, leading the nation in tackles for loss with an American Athletic Conference record 24 and ranking second in sacks with 13.5. Toiling for a team with just three victories, Harvey has not gotten much national attention. He's been a revelation. A former walk-on and reserve running back, Harvey moved to defense this season and at 6-foot-1 and 225 pounds he has been a nightmare for opponents to block.

A 340-pound junior who started four games last year and moved into a full-time starting roll on the Blazers' offensive line this season.

"Big and physical. Fun to watch him pull as he always seems to knock guys out of the way. Solid at the point of attack, particularly in the run game," Cubelic said.

The Egg Bowl is likely to come down to whether Ole Miss' potent offense, led by quarterback Jordan Ta'amu, can roll up some points against a stingy Mississippi State defense. Up front, there will be a matchup of possible first-round draft picks. Sweat is second in the SEC in sacks with 9½. Little was a second-team midseason All-American and former five-star recruit.