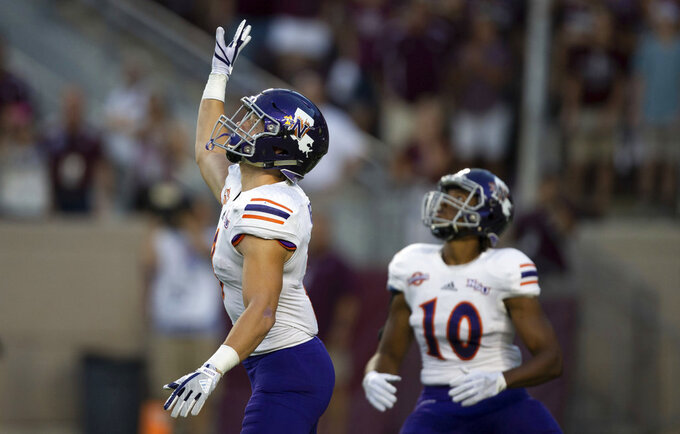 FILE - In this Aug. 30, 2018, file photo, Northwestern State's Ryan Reed (8) waves for a fair catch on the opening kickoff against Texas A&M during an NCAA college football game, in College Station, Texas. About 1 of every 10 kickoffs in the Football Bowl Subdivision have resulted in a fair catch giving the return team possession at its 25-yard line under a rule that went into effect this year. The purpose of the rule was to minimize kick returns, which have a higher injury rate compared with other types of plays. If a fair catch is made anywhere between the goal line and 25, it's a touchback and it's marked at the 25. (AP Photo/Sam Craft, File)

The new college football rule rewarding teams for making fair catches on kickoffs has not caught on like officiating supervisors expected and more changes could be made in 2019 to further reduce kick returns or make them safer.

If a fair catch is made on a kickoff anywhere between the goal line and 25 this season, it is ruled a touchback and the ball is marked at the 25. The goal was to have fewer kick returns, which have a higher injury rate compared with other types of plays because of the likelihood of high-speed player collisions.

The figures were generated by reports submitted to the NCAA by game officials and provided to The Associated Press on Friday.

According to a study done in 2012, the most recent data available, the average starting position after a kickoff return was between the 22- and 23-yard line if the returner starts in the end zone.

"When we put the rule in place, No. 1, I thought it was probably good for the game and I expected to see it used a little bit more because the average return is not the 25," Big Ten coordinator of officials Bill Carollo said.

A downside to the rule: A muffed fair catch is marked at the spot regardless of which team recovers, as happens on a punt. Atlantic Coast Conference coordinator of officiating Dennis Hennigan said coaches told him they would prefer their returners to run back kicks instead of risking a muff and getting pinned deep in their end. Hennigan said coaches also told him they don't want to forfeit the possibility of a long return.

Alabama's Nick Saban is in that camp. The Crimson Tide's Josh Jacobs leads the FBS with a 34.2-yard average on nine returns, and he ran one back 77 yards for a touchdown.

"We're using that as a play in the game to try to make a big play," Saban said. "We have explosive players to do it. A lot of people have used the fair catch against us and taken the ball at the 25-yard line, which is their prerogative."

Pittsburgh has employed the rule even though Maurice Ffrench ranks second to Jacobs and has run back two kicks for touchdowns. Ffrench has four fair catches and teammate Mychale Salahuddin has three.

"You stand on the goal line inside the hash, and if you have to take one step backward or you take one step to the right, you fair catch it because it's just too hard to get (a return) timed up," Pitt coach Pat Narduzzi said.

Utah has returned only two kicks, fewest in the nation, and taken four fair catches. Playing home games at an elevation over 4,600 feet, balls carry farther, and opponents have put 68 percent of their kicks into the end zone for touchbacks.

Utes coach Kyle Whittingham said his staff has researched areas on the field where successful kick returns are most likely to originate.

"We have definite areas on the field where it's called the green zone, where we will return the ball," he said. "If it's not in that green zone, we're going to let it go into the end zone or fair catch it."

NCAA national coordinator of officials Rogers Redding said the Football Rules Committee probably will consider more changes to kickoff rules next year with the objective of reducing returns or making them less likely to result in injury.

A possible tweak, he said, would be allowing a team whose return man recovers his own muffed kick on a fair-catch attempt to still get possession at the 25 rather than at the spot of the recovery.

Also likely, he said, is consideration of some of the NFL kickoff rules that went into effect this year. In the NFL, kickoff coverage players must be stationary before the ball is kicked; previously they could start running before the kick. The NFL also does not allow blockers to engage defenders until the ball is received and it eliminated two-man blocking wedges.

Colorado coach Mike MacIntyre, who has had input on rules issues on behalf of the American Football Coaches Association, said the fair catch rule was a first step and that the look of kickoff coverage and returns will continue to evolve.

"I think when we get it all set up in a couple years, when it gets all like it should," MacIntyre said, "I think it will be a really good play."