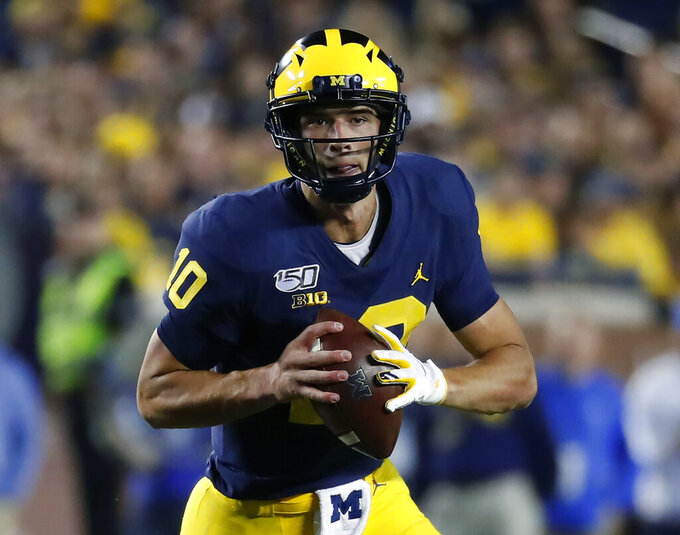 FILE - In this Aug. 31, 2019, file photo, Michigan quarterback Dylan McCaffrey rolls out to throw in the second half of an NCAA college football game against Middle Tennessee in Ann Arbor, Mich. Former Michigan quarterback McCaffrey announced on social media he plans to transfer to Northern Colorado, where his dad is the head coach. In a Twitter post on Sunday, Jan. 31, 2021, McCaffrey wrote: “Extremely honored to announce I will be continuing my academic and athletic career at The University of Northern Colorado. Go Bears!!” (AP Photo/Paul Sancya, File)

His name: Dylan McCaffrey, the third oldest of his four boys and a highly touted quarterback with two years of eligibility remaining after leaving Michigan.

The father played it coy when asked about Dylan.

“We have a lot of kids in our program: What’s the last name?” Ed McCaffrey cracked Thursday in a virtual news conference.

Now comes the pressure: From his wife and Dylan’s mom, Lisa.

“If things don’t go right, Lisa is going to be upset,” the coach and former NFL receiver said.

There's a lot of McCaffreys on board to try to turn things around at a program that's only had two winning seasons over the last 16 years. Ed McCaffrey was hired on Dec. 12, 2019, but has yet to coach a game following the decision by the Big Sky Conference to postpone its 2020 football season to the spring of 2021. He brought aboard his oldest son, Max, as the receivers coach for the Bears, who play on the Football Championship Subdivision (FCS) level.

Now, there's Dylan in line to run the offense as he swaps the blue and maize colors of Michigan for the blue and gold of Northern Colorado. He appeared in 13 games for the Wolverines, throwing for 242 yards and three touchdowns. A dual-threat, he also rushed for 166 yards and two more touchdowns. Dylan was eyeing the starter's job at Michigan last season before dealing with an injury and “then the coaching staff made a different decision,” his dad said.

“You’re just faced with a decision to make, ‘Hey, this hasn’t played out the way I thought. What next?’” Ed McCaffrey said. “So that’s what a lot of players on our team, including Dylan, have gone through — an experience like that, where a lot of the reasons they went there originally are no longer there. He absolutely loves some of his friends he made at Michigan. He’ll have those friends for a lifetime. ... He came to UNC to get on the field to play.”

Dylan McCaffrey was a highly touted quarterback coming out of Valor Christian High School in Highlands Ranch, Colorado, which is about an 85-mile drive from Greeley. He was ranked by some as the No. 6 quarterback in the country out of high school.

Upon entering the transfer portal, he was contacted by several big schools. His father played the role of father, not coach.

“I let the offers come in and let the coaches call him. Then I would ask him how these conversations went and I pretty much stayed out of it,” said Ed, who played 13 seasons in the NFL as a wide receiver for the Denver Broncos, San Francisco 49ers and the New York Giants. “As the weeks went by, I asked him who he was thinking about and talked through it with him. Just made sure again, like coming out of high school, that he was asking all the right questions and looking at their roster and looking at who they’re bringing in.

“I admit, he had some pretty good options. I’m absolutely thrilled, on his own, he decided this was the best option.”

The father is no stranger to coaching his four sons, having instructed all of them at some point. There’s also Christian, a standout tailback with the Carolina Panthers, and the youngest, Luke, who was a QB at Nebraska before recently entering the transfer portal.

From his experiences with coaching Max, Ed McCaffrey learned how to separate coach from father and not bring football talk to the dinner table.

“You absolutely have to know when to take your coach's hat off and be a dad," the father said. "I’m always going to be a dad first.”

The Bears have a roster full of players they've added from programs like Akron, Central Florida, Cincinnati, Texas Christian and Washington State. There's another Michigan player on the roster in tailback Tru Wilson, who rushed for 586 yards on 107 attempts over his career with the Wolverines before transferring.

Although the Bears have opted out of playing this spring, they will schedule a few scrimmages.

And know this: Their coach is setting the bar high next season — like national-championship high.

“I say if you’re not setting them high enough, and people aren’t laughing at your goals, then you need to set them higher,” Ed McCaffrey said. “I think if (a national title) is not your goal, what are you doing?"