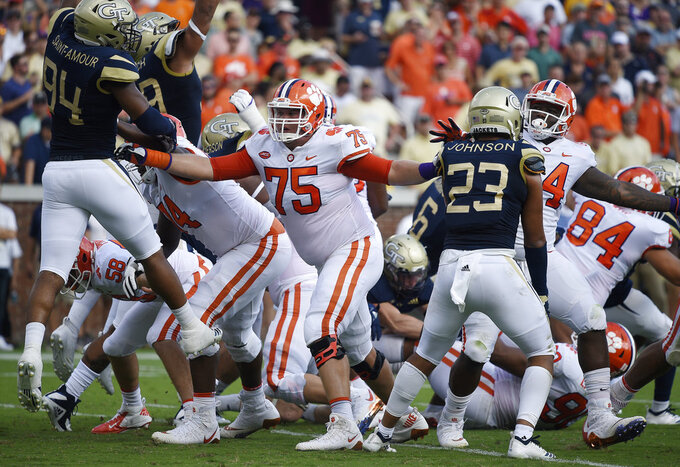 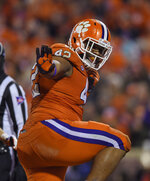 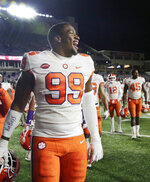 CLEMSON, S.C. (AP) — Clemson has begun preparations for its College Football Playoff semifinal against Notre Dame at the Cotton Bowl.

The Tigers (13-0, CFP No. 2) had taken a week-and-a-half break — aside from several All-Americans crisscrossing the country for various college football awards — since winning the Atlantic Coast Conference title with a 42-10 victory over Pitt. But to the sounds of "Santa Claus is Coming To Town," Clemson reconvened Wednesday at its indoor training facility to start getting ready for the Fighting Irish (12-0, CFP No. 3) on Dec. 29.

The Cotton and Orange winners advance to the national title game in Santa Clara, California, on Jan. 7.

"The energy was really good," Clemson coach Dabo Swinney said. "The guys were eager to get out there and get going."

Despite Clemson's power-packed offense and defense (the Tigers are fifth nationally in overall offense and fourth in the country on defense), the Tigers honed in on the details of what it will take to advance to their third national title game in four seasons .

"I want us to focus on the little things," running backs coach and co-offensive coordinator Tony Elliott counseled his group. He urged them to stay low to reduce a defender's target area and not forget the things they've worked on since last year ended with a 24-6 loss to eventual national titlist Alabama in the CFP semis.

The Tigers last played Notre Dame in a drama-filled, rainy 24-22 victory in 2015, a game where Swinney quipped the Tigers had to "BYOG, bring your own guts."

He's not sure that contest will have much bearing on this one, especially since Swinney has spent several plane rides reviewing Notre Dame games — and getting more and more concerned about the challenge ahead for the Tigers.

"I think everybody is who they are at this point," Swinney said. "They won't vary too much from that because that's what got them here. At the end of the day, they're really good."

Clemson worked for about 90 minutes as several players had to finish up final exams this afternoon and Thursday morning.

"I could tell some of them had 'finals brain,'" Swinney joked.

Workouts will ramp up Thursday through Dec. 19. Swinney expects to give his players off three days after that before to campus on Dec. 23 when the Tigers will fly to Dallas.

Swinney said his wife, Kathleen, and other staff spouses are working on a Christmas program where the team will celebrate together on Dec. 25 before continuing workouts with the Tigers usually grueling Tuesday, game-week practice.

"Things are a little different this year with the games' so early," the coach said.

Swinney said there was no awards "hangovers" for players like defensive linemen Christian Wilkins and Clelin Ferrell and left tackle Mitch Hyatt, who were all first team AP All Americans and had their names included on several other organization's All-American lists.

Wilkins also won the William V. Campbell Trophy from the National Football Foundation given to the game's top scholar-athlete.

Wilkins, like Ferrell and fellow defensive end Austin Bryant all returned to Clemson this season instead of leaving for the NFL when they had the chance.

Swinney said Wilkins made the most of his opportunities.

"You don't get those experiences when you don't come back," he said. "He exhausted and got everything out of this season and he had a lot of fun doing it."