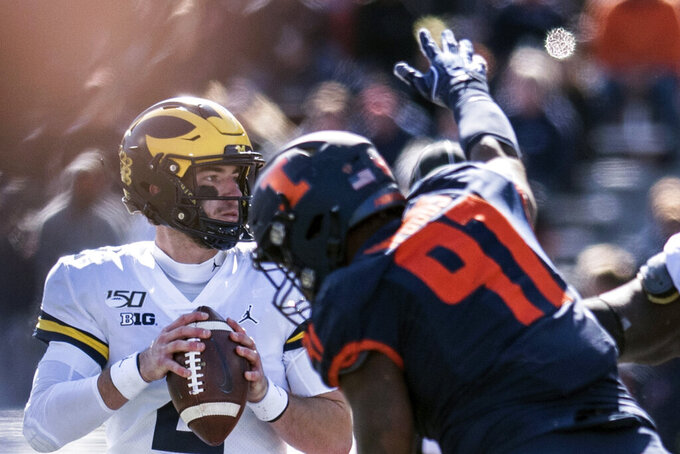 One of just two unbeatens left in the Big Ten East, No. 7 Penn State can earn some cushion with a signature win at home. Meanwhile, the No. 16 Wolverines will try to stay in the hunt for the division crown by winning their second in a row in the series.

Penn State's defensive line vs. Michigan's defensive line: These two units obviously won't meet head-to-head, but this game could easily turn into a competition between both defensive fronts. The Nittany Lions are second in the country with 27 sacks while the Wolverines have posted 16 over the last three games. These teams have also combined for 49 tackles for loss over that same span.

Michigan: QB Shea Patterson. The Wolverines' signal-caller has been a turnover machine with four fumbles lost and three interceptions so far. He completed just 11 of 22 passes against Illinois last week. He'll need to be better against the nation's fourth-ranked total defense that's allowing just eight points per game.

Penn State: QB Sean Clifford. The junior got off to a shaky start against Iowa, holding the ball too long and taking unnecessary hits. He settled in nicely, however and finished as the second-leading rusher. His running abilities could come in handy again against Michigan's aggressive front seven.