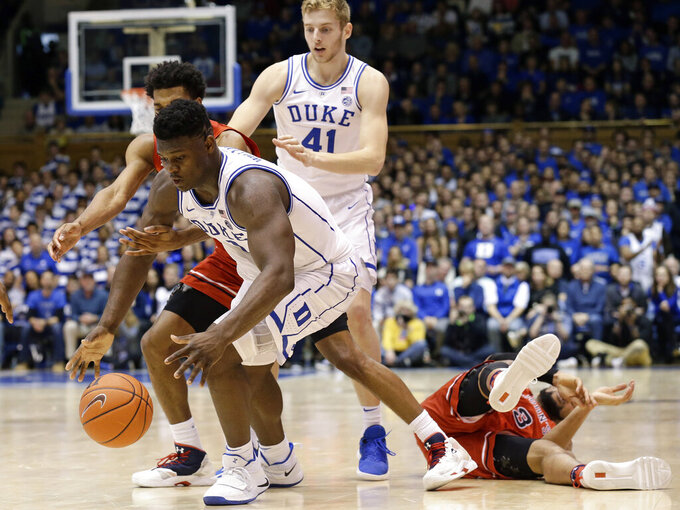 The Super Bowl marked the official end of the football season. Now it's time for college basketball's turn in the spotlight.

Sports fans crazed with football for five months need something to fill the void, and college basketball is a perfect fit. Star players have established themselves, conference races are heating up and March Madness is just around the corner.

To get you caught up, we've got a rundown of what has happened so far and what to look forward to:

Zion Williamson arrived at Duke with plenty of hype as the highest-flying freshman in Coach K's stellar recruiting class.

Built like an NFL defensive end, the 6-foot-7, 285-pound forward produces more highlight-reel plays in one game than most players do in a season. Dunking with his head above the rim and snatching blocked shots from the shooter's hands, Williamson is unlike any player in college basketball, perhaps ever.

He is almost like a rock star, with fans whispering "there he is," when the Blue Devils take the floor, lining up to see his dunks in warmups.

If you're going to watch only one player from now until the national championship game in April, Williamson is the one. And do it while you can: He likely will be the No. 1 pick in this year's NBA draft.

Williamson has been good and so has his team.

Duke has four freshmen who likely will be first-round NBA picks, including three potential lottery picks. R.J. Barrett is smooth, athletic and could be the No. 2 pick behind Williamson next summer. Cam Reddish is 6-8 and can play inside or out. Point guard Tre Jones could end up being better than his brother, Tyus, who plays for the NBA's Minnesota Timberwolves.

The Blue Devils don't just beat teams, they steamroll them with flurries of dunks and 3-pointers.

Fans often get tired of the hype surrounding Duke's teams. This year, it's legit.

The best player most college basketball fans may not have heard of is Ja Morant.

That's because he plays at Murray State, which gets overshadowed by the two larger programs in Kentucky.

Like Williamson, Morant is a highlight waiting to happen. He has become known for the basketball version of "catching a body," occasionally jumping over defenders while dunking on them.

Morant averages 24.1 points, 10.3 assists and 5.6 rebounds per game. This show, too, will likely end soon; Morant is expected to be a lottery pick later this year.

Tennessee can not only stake a claim as the best team in the SEC, but the best in the country.

The Volunteers currently are No. 1 in the AP Top 25 and have lost once all season, in overtime to then-No. 2 Kansas.

Tennessee is loaded with talent and depth and has a front-runner for national player of the year in Grant Williams. Coach Rick Barnes' team can put up points in bunches and muscle teams on the defensive end.

The Vols are a true national-title contender.

Kansas locked up its record 14th straight Big 12 title a year ago. The Jayhawks have a fight on their hands for No. 15.

The Jayhawks enter this week with three teams above them in the standings: Kansas State, Baylor and Iowa State.

The good news: They're only a game back with a month left before the Big 12 Tournament.

Gonzaga entered the 2018-19 season being hyped as a Final Four contender, maybe even better than the team that reached the national title game two years ago.

The Zags hit a snag before the season started, losing multitalented forward Killian Tillie to an ankle injury. Now that Tillie is back and guard Geno Crandall has returned from a broken hand, Gonzaga will be tough to beat.

The Zags have a national player of the year-type player in Rui Hachimura and arguably have coach Mark Few's most talented roster ever.

This year could mark the first with an all-ACC Final Four. OK, maybe not, but the conference is loaded.

Duke has been dominant, No. 3 Virginia still has that lockdown defense and No. 8 North Carolina has a trove of talent. No. 10 Virginia Tech has one of the nation's best backcourts and can light it up from the 3-point arc. No. 22 Florida State is loaded with talent, depth and athleticism. Louisville has made huge strides in its first season under Chris Mack, and Syracuse has a victory over Duke under its belt.

The final month and the ACC Tournament should be a wild ride.

Every March, mid-major teams make deep runs at the NCAA Tournament. Expect this year to be no different.

Nevada has the type of talented, veteran roster that could send coach Eric Musselman to the top of the college basketball world.

Houston has outstanding guards and coach Kelvin Sampson is one of the best in the game.

Buffalo has shown last year's knockoff of Arizona in the NCAA Tournament's first round was no fluke. The Bulls have nearly everyone back and are 19-3 heading into this week.