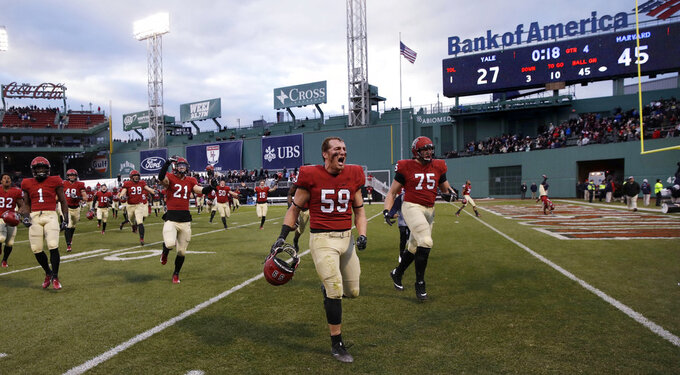 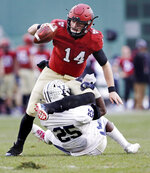 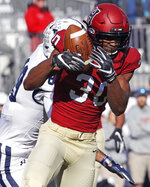 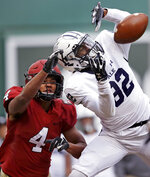 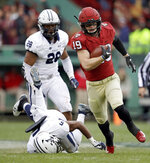 BOSTON (AP) — The clock ticked down to zero and the Harvard players sprinted across the Fenway field to celebrate with the student section, beyond the Pesky Pole and under the retired numbers of a century of Boston Red Sox stars.

Another chapter in the history of an iconic ballpark.

Another memorable moment in one of college football's oldest rivalries.

Tom Stewart threw for 312 yards and three touchdowns before being wheeled off the field on a stretcher in the fourth quarter, leading Harvard to a 45-27 victory over Yale on Saturday in the highest-scoring edition in the 143-year history of The Game.

The Crimson ran up 578 yards in offense for their most prolific offensive day in the annals of the rivalry, which was contested off-campus for the first time since an 1894 game that was so violent the Harvard faculty voted to disband the football program.

"Initially, some of us were not as excited as we could be, because we wanted to have our last home game at the Stadium," Harvard offensive lineman Ben Shoults said. "But once we got a chance to walk around on the field, and we heard the fans and we got into the environment ... it was a little more than we ever could have expected to play this game that means so much to us at Fenway."

Fifty years after The Tie that was celebrated with The Crimson student newspaper headline "Harvard Beats Yale 29-29," the teams made a different kind of history. The 72 total points were the most ever in The Game between two of the nation's oldest and most prestigious academic powerhouses, surpassing the 33-31 Yale victory in 1993.

"It was a pretty amazing opportunity to play this, just a historic game here with this incredible tradition and rivalry we have between Yale and Harvard," Bulldogs coach Tony Reno said. "We weren't able to continue to match points."

Stewart, a senior playing his last game, left on a stretcher after getting hit as he dropped into a slide on the temporary sod about where the Red Sox shortstop would stand. As doctors attended to him, players on both teams kneeled; Yale quarterback Griffin O'Connor made the sign of the cross.

The sold-out crowd acknowledged Stewart when he was wheeled off. The school announced after the game that it was a right hip injury and Stewart was expected to make a full recovery.

"Heartbreaking for that to happen that late in the game, that late in his career," said Harvard coach Tim Murphy, who is now 18-7 in The Game.

Backup quarterback Jake Smith came in and handed off to Devin Darrington on the next play for a 16-yard touchdown that gave the Crimson (6-3, 4-3 Ivy League) a 45-27 lead.

Darrington ran for 91 yards and two scores and had another negated by a taunting penalty when he wagged his finger at a defender. Tyler Adams ran for 125 yards on just five carries for Harvard, including a 62-yard touchdown in the second quarter.

O'Connor completed 23 of 48 passes for 328 yards. JP Shohfi had seven catches for 127 yards, including a 16-yard touchdown reception. Reed Klubnik had five catches for 91 yards and set Yale's single-season record with 1,143 receiving yards in his career.

With dozens of players from 1968 game watching, the schools traded touchdowns through most of the first three quarters — tying it at 7-7, 14-14 and 21-21 — before Yale took its first lead of the game on a field goal early in the second half.

Stewart's 15-yard pass to Jack Cook gave Harvard a 28-24 lead with 5 minutes left in the third, then another Yale field goal cut the deficit to one point.

In the fourth, Darrington went up the middle for a 27-yard score, but he wagged a finger as he outran a defender toward the goal line and was called for taunting. The touchdown negated, Harvard settled for a field goal.

"The bottom line is: He was wrong," Murphy said. "He was wrong. It's that simple. It was the right call; he was wrong. I'm just so grateful to our team that he didn't have to learn that the absolute hard way of trying to live with that for a year or however many years."

On the Crimson's next possession, Darrington again broke loose, gaining 27 yards to the 6. Two plays later, he took it in from the 4 to give Harvard a 37-27 lead.

Yale trailed 21-14 when O'Connor connected with Klubnik for a 48-yard gain to the 2. But Dudek was slammed down in the backfield for a loss of 6, and then a pass fell incomplete.

On third down, O'Connor found Dudek at the 3 and he was immediately hit by cornerback Wesley Ogsbury, whose head snapped back on contact. The officials threw a flag for targeting, the call was confirmed on replay and Ogsbury was ejected.

The teams — sharing the sideline because of the baseball stadium's configuration — began shouting at each other until coaches stepped between them. With a new set of downs, O'Connor ran it in on second down to tie the score 21-21.

The band played "Sweet Caroline" early in the fourth quarter in keeping with Red Sox tradition at Fenway, which has hosted college football periodically since it opened in 1912. It was also the home of the American Football League's Boston Patriots in the 1960s; it has recently hosted Boston College games against Notre Dame and UConn.

The field barely fit inside the ballpark, even with the bullpens removed. Both teams shared the sideline on the Green Monster side of the field; the scoreboard on the wall was repurposed, with the innings replaced by quarters.

Members of the grounds crew were patching divots in the turf during most breaks, and a chunk came up on Stewart's slide.

The Ivy League season is over, and the schools do not play in the FCS postseason. The Fenway field will be scrubbed of the football markings for an Irish hurling tournament, the Fenway Hurling Classic.