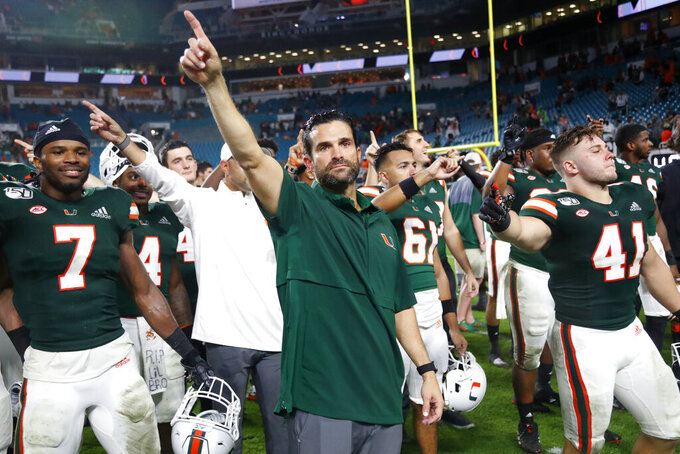 CORAL GABLES, Fla. (AP) — Miami fired offensive coordinator and quarterbacks coach Dan Enos on Friday, one day after the Hurricanes were shut out by Louisiana Tech in the Independence Bowl and finished with a 6-7 record.

Enos was with Miami for only one season, and to say it didn’t go to plan would be an understatement. The Hurricanes finished the year on a three-game losing streak, endured wildly inconsistent quarterback play and are ranked 129th — out of 130 teams — in third-down conversion percentage.

Only Akron, which finished the season winless, was worse than Miami in that department. Miami converted 27.2% of its third downs, Akron converted 26.4%.

The Hurricanes announced the decision with a one-sentence statement: “The University of Miami football program announced Friday that Dan Enos has been relieved of his duties as offensive coordinator/quarterbacks coach.”

The numbers did the rest of the talking.

Miami is ranked 89th nationally in scoring offense, 99th in total offense, 122nd in rushing offense and 122nd in red zone offense. It used three quarterbacks in the 14-0 bowl loss, and still managed only 227 yards of offense.

“Our execution on offense and our inability to sustain drives on offense gave us no chance to win this football game,” Miami coach Manny Diaz said after the Independence Bowl.

The Hurricanes flew home later that night. By Friday morning, the Enos move — it was known before the bowl that the sides were going to part ways, barring a major change of plans — was official. It’s unclear if more changes are coming, or when.

“Manny Diaz is the right leader for our program but clearly changes are necessary and expected,” Miami athletic director Blake James wrote on Twitter late Thursday night, around the time the team charter from Shreveport, Louisiana landed. “Manny is in the process of making a full assessment of the football program, including coaches and staff.”

Enos was a splashy hire by the Hurricanes in January, not long after Diaz — who had been the school’s defensive coordinator from 2016 to 2018 — left his job at Temple to return to Miami and take over for Mark Richt as head coach.

Enos came to Miami after one season as an associate head coach at Alabama, which reached the College Football Playoff national championship game. Diaz called him an innovative play caller and said he was the top candidate for the job.

Less than a year later, Diaz is looking for Enos’ replacement.

It will be a rocky offseason for Diaz, whose first season ended with losses to FIU, Duke and Louisiana Tech. The Hurricanes lost three games where missed kicks — both field goals and extra points — were factors, plus lost three times when they were favored by two touchdowns or more.

“The whole season has a what-could-have-been aspect to it,” Diaz said. “Whether that’s the close losses early in the year, or the way things just kind of fell apart especially offensively in the last three games. But everything that happened happened exactly for a reason, and it has brought us to this point, and when you come to a point like this there is a lesson that has to be learned.”