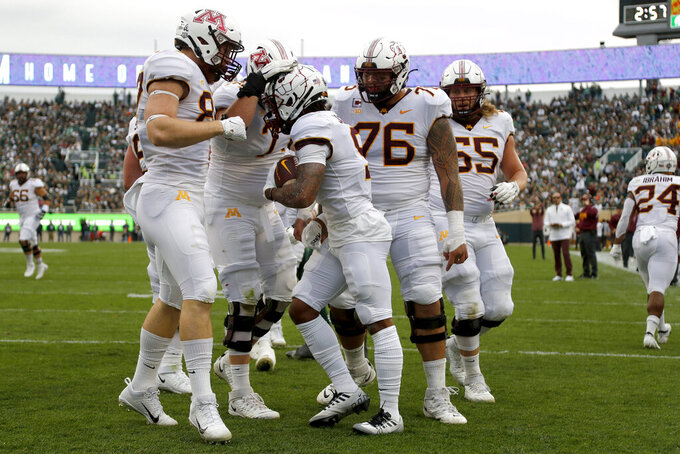 EAST LANSING, Mich. (AP) — Tanner Morgan threw for 268 yards and three touchdowns and Mohamed Ibrahim rushed for 103 yards and a score to lead Minnesota to a 34-7 rout over struggling Michigan State in the Big Ten opener for both schools.

The Gophers (4-0) are off to their best start since they began the 2019 season 9-0. Minnesota dominated Michigan State (2-2) on both sides of the ball, outgaining the Spartans on offense 508-240 while also grabbing two interceptions and a fumble.

“I've got to take my hat off to our players,” said Minnesota coach P.J. Fleck. “They just played incredibly hard. I couldn't be more proud of them right now in this moment.”

Despite missing star receiver Chris Autman-Bell, who is out for the season following a leg injury last week, the Gophers' offense was dominant. Minnesota did not punt, converted 10 of 12 third-down attempts, had possession of the ball for 42:30 and Morgan hit 10 different receivers.

“I've been saying it for a long time now that we have a lot of guys that can go make plays for us,” Morgan said. “We saw that today — a lot of guys that were involved in the game plan and made plays. It makes my job really easy.”

Michigan State appeared ready to rally from a 17-point deficit at the start of the second half by driving to the Minnesota 5-yard line but Thomas Rush punched the ball free from quarterback Payton Thorne and Justin Walley made the recovery.

The Gophers scored on their first three possessions to go up 17-0.

Ibrahim, who extended his streak of 100-plus rushing yards to 13 games, broke Minnesota’s all-time rushing touchdown record with a 2-yard run off the opening drive. It was his 41st rushing score, breaking a tie with former Gophers running back Darrell Thompson.

Morgan, who completed 23 of 26 passes for 268 yards, capped off the next drive when he hit Daniel Jackson with a 23-yard touchdown pass. Matthew Trickett followed with a 26-yard field goal.

Morgan added a 6-yard touchdown pass to tight end Nick Kallerup in the third quarter and a 4-yard scoring pass to Jackson early in the fourth quarter. Trickett closed the Gophers' scoring with a 22-yard field goal.

“We were operating fantastic today,” Morgan said. “We were executing. We were stopping ourselves a lot, though.”

It was the second straight game that Michigan State has been dominated. Last week against Washington the Spartans gave up 503 yards of offense.

Tucker said he understands what the issues are with his team.

“I’m probably not gonna talk about them right now,” he said. "I don’t want to say anything I shouldn’t say right after a game like this.”

Minnesota: The Gophers showed why they are considered the frontrunners to win the West Division. Facing their toughest opponent so far, Minnesota dominated in all phases of the game.

Michigan State: The Spartans’ pass defense for the second straight game struggled in coverage. Morgan completed 12 passes in the first half of 10 yards or more.

The Gophers will likely be ranked after being among the unranked teams with the most votes in the AP Top 25.

Minnesota: Hosts Purdue on Oct. 1 in a key Big Ten West game and then has a bye week.

Michigan State: Goes on the road Oct. 1 to play Maryland and follows with a brutal three-game stretch that includes Ohio State, Wisconsin and Michigan.