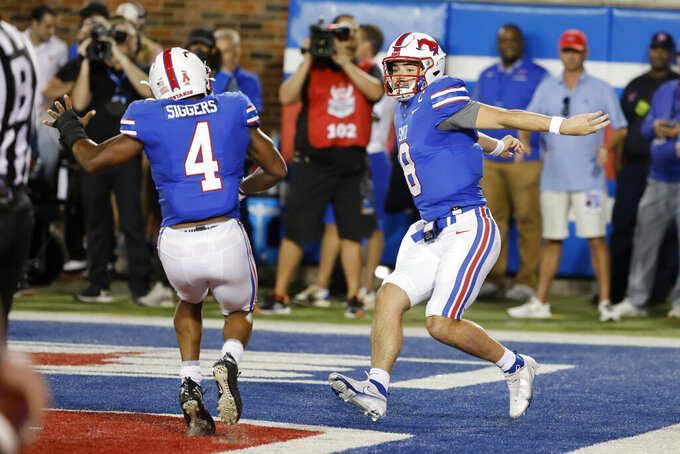 SMU running back Tre Siggers (4) celebrates with quarterback Tanner Mordecai (8) after Mordecai scored a rushing touchdown against Tulane during the first half of an NCAA college football game in Dallas, Thursday, Oct. 21, 2021. (AP Photo/Michael Ainsworth) 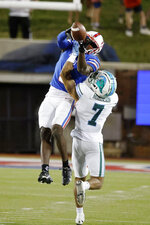 DALLAS (AP) — SMU coach Sonny Dykes saw the best first half of the season from his team, which made it easier to excuse a drop-off after halftime.

Tanner Mordecai threw three touchdown passes to push his nation-leading total to 29, ran for another score and No. 21 SMU dominated the opening half in a 55-26 victory over Tulane on Thursday night.

The Mustangs (7-0, 3-0 American Athletic) are a victory away from their second 8-0 start in the past three seasons as they get ready to play three of the next four games on the road in a stretch that ends with a trip to No. 2 Cincinnati.

“You’ve got to go play well when you have the national stage,” Dykes said. “We don’t get it very often. I thought our guys were excited about the opportunity and took advantage of it certainly in the first half. Second half wasn’t as good.”

Mordecai had 300 of his career-high 427 yards at halftime, capped by a 22-yard toss to Reggie Roberson Jr. for a 31-7 lead 53 seconds before the break. The Oklahoma transfer's 3-yard scoring run on a bootleg off a fake pitch fooled the entire Tulane defense early.

“Overall just poor execution on the defensive side of the ball,” Tulane linebacker Nick Anderson said. “Many times we had them third-and-long and just didn’t execute the right calls to get off the field.”

Second-year freshman Michael Pratt tied a career high with three touchdown passes to give him at least one in all 17 of his games, but the early deficit was too big in a fifth consecutive loss for the Green Wave (1-6, 0-3), which was displayed by Hurricane Ida early in the season.

Pratt exited the game midway through the fourth quarter after getting hit while sliding at the end of a scramble. SMU linebacker Gary Wiley was penalized for a late hit after a targeting call was overturned. Freshman Kai Horton took over and later threw an interception.

With lead running back Ulysses Bentley IV limited again by an ankle injury, SMU’s Tre Siggers had 81 yards rushing and two touchdowns, including a 1-yard score that was initially ruled short of the goal line but reversed on replay. Bentley had one early catch for 6 yards.

Danny Gray had eight catches for a career-high 140 yards, the biggest a 43-yarder on third-and-14 from the SMU 18-yard line with Tulane building momentum in the third quarter.

Tulane: A spirited third quarter kept the game interesting. A fake field goal almost resulted in a touchdown that could have pulled the Green Wave within 10 points. Tulane recovered an onside kick late in the third when trailing by 19, but Pratt was stopped short on a fourth-down scramble near midfield on the first play of the fourth quarter.

Mordecai, who entered the game tied with Western Kentucky's Bailey Zappe for the national lead at 26 TD passes, was 30 of 42 without an interception as the Mustangs finished with a season-high 612 yards total offense, 400 before halftime.

The Mustangs’ seventh consecutive win over Tulane was the sixth under Green Wave coach Willie Fritz, but the previous five were by an average of just 4.2 points. Tulane wasn’t that close after the 6:08 mark of the first quarter. Still, the sluggish start to the second half might keep SMU from moving up much.

TRICK BUT NO TREAT

Trailing 31-13 and looking for a second consecutive score in the third quarter, Tulane lined up for a field goal at the SMU 9 before breaking into a formation with kicker Ryan Wright taking the snap. He rolled left and threw back to his right to tight end Will Wallace in the end zone. Shaine Hailey, who had been called for a late hit on Pratt moments earlier, had his back to the throw but kept Wallace from making the catch.

Tulane: Another game against a ranked opponent as No. 2 Cincinnati visits the Green Wave on Oct. 30.

SMU: The first of back-to-back road games in Houston on Oct. 30. The Mustangs have won three of the past four against their former Southwest Conference rival, including twice when Houston was ranked.