No. 3 Buckeyes await word on 'The Game' with plenty at stake 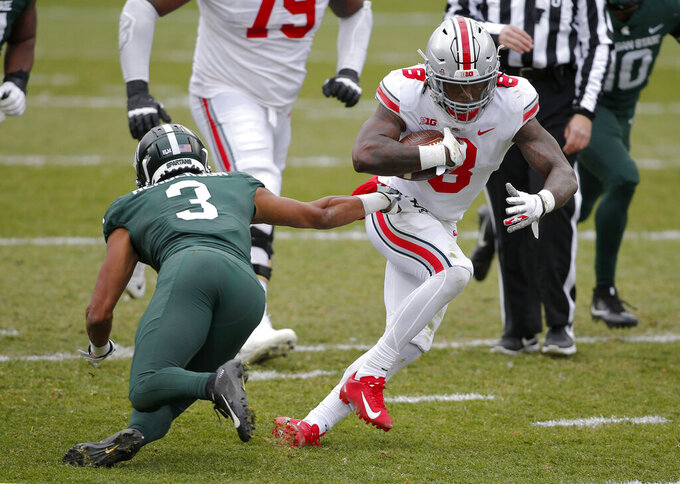 COLUMBUS, Ohio (AP) — No. 3 Ohio State banked some style points during its rout of Michigan State, but the next step toward any kind of championship for the Buckeyes this season could be out of their control.

They must wait this week for COVID-19 tests to determine whether Michigan can travel to Columbus for the finale of the pandemic-delayed regular season on Saturday.

With two games already canceled, the Buckeyes (5-0) must get in a sixth game under current conference rules to be eligible to play for a fourth consecutive Big Ten championship. But even that might be up in the air.

The Big Ten could decide that Ohio State, even with only five games, will still represent the East Division in the Dec. 19 title game, at least in part because the conference doesn’t want to hurt the Buckeyes' chances of earning a national playoff berth.

Ohio State is holding on to the fourth spot in the College Football Playoff rankings but could use a solid win in “The Game,” and a conference championship, to add to its resume and persuade the selection committee to keep it in front of Texas A&M (7-1) and Florida (8-1) despite playing fewer games.

It promises to be an interesting week.

Ohio State has had its own problems with the coronavirus. An outbreak in its facility led to the cancellation of the Nov. 28 game at Illinois. Among those taken out of action was coach Ryan Day, who had to stay home and watch the Michigan State game on TV.

“I’m hoping the worst part is behind us and we can look forward," Day said Saturday.

Ohio State's list of unavailable players included 23 names before the 52-12 drubbing of the Spartans (2-4). They included three starting offensive linemen and a starting linebacker. Three assistant coaches also were out.

“I’m honestly surprised that I didn’t get it," said quarterback Justin Fields, who threw for two touchdowns and ran for two more. "I guess it was just God looking out for me. We were just glad we got the opportunity to play.”

Michigan (2-4) reported an increased number of positive tests last week, leading to the cancellation of its game at Maryland. The size of the outbreak has not been disclosed by the school.

Being forced to scrap the game in Columbus would be a sour end to a disappointing season for Wolverines coach Jim Harbaugh. So would another loss to the Buckeyes, who have won the rivalry game in each of Harbaugh's first five years at Michigan.

A win, of course, would make things better for Harbaugh, who has one year left on his contract at the school he led as a quarterback in the mid-1980s.

The Buckeyes beat Michigan 56-27 at the Big House last year in Day’s first game as head coach in the series and extended their winning streak over the Wolverines to eight straight.

Day said he was proud of how the Buckeyes moved past the rough, uncertain week to dominate Michigan State. Defensive line coach Larry Johnson was the stand-in for Day, with offensive coordinator Kevin Wilson calling the plays that produced 521 yards.

“It was rough," said running back Trey Sermon, who rushed for 112 yards and a touchdown, his best day since transferring to Ohio State from Oklahoma in the offseason. “But (as) our coaches were saying — it’s adversity, we’re going to face it.”

Said Fields: “This week really brought us together as a team.”