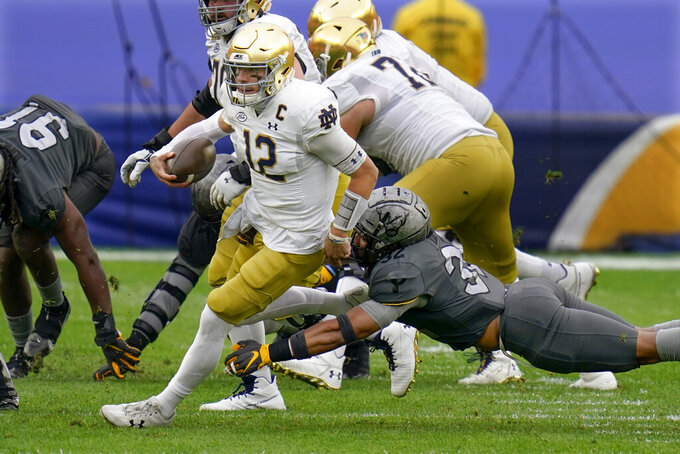 Notre Dame quarterback Ian Book (12) scrambles away from Pittsburgh linebacker SirVocea Dennis (32) for a first down during the first half of an NCAA college football game, Saturday, Oct. 24, 2020, in Pittsburgh. (AP Photo/Keith Srakocic) 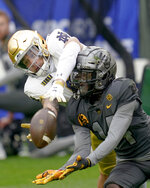 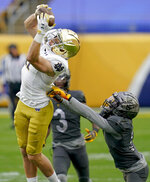 PITTSBURGH (AP) — Brian Kelly understands human nature. And the longtime Notre Dame coach is fine if his players are looking forward to a showdown with top-ranked Clemson in two weeks, provided they play like a team capable of hanging with the Tigers in the interim.

“We have to elevate our play if we have any chance to get to our goal, which is to win a championship,” Kelly said.

Ian Book passed for 312 yards and three touchdowns — two of them long catch-and-runs to graduate transfer Ben Skowronek — as the Fighting Irish rolled past Pittsburgh 45-3 on Saturday.

A week after scuffling its way past Louisville, No. 3 Notre Dame (5-0, 4-0 Atlantic Coast Conference) had no such issues while handling the Panthers (3-4, 2-4) their fourth consecutive loss. Book hit Skowronek for a 34-yard score on Fighting Irish's first possession and Pitt — playing without injured senior quarterback Kenny Pickett for a second straight week — simply could not keep up.

Skowronek, a transfer from Northwestern, has developed a close relationship with Book since arriving on campus. He could see Book was frustrated after the sluggish performance against the Cardinals. Book responded by moving past Jimmy Clausen and current offensive coordinator Tommy Rees and into second place on the school's career touchdown pass list (63) behind Brady Quinn (95).

“It paid off for him,” Skowronek said of Book. "He had a hell of a game... he’s a hell of a football player and he’s a winner.”

One who had plenty of help.

Notre Dame’s massive offensive line held its own against one of the nation’s best pass-rushing teams and when Book had time, he had no trouble finding teammates open downfield. Book averaged 19.5 yards per completion and often had to do little more than flip the ball up and let his playmakers do the rest. He connected with Skowronek for a 73-yard score in the second quarter, with the 6-foot-3 Skowronek doing most of the work as he out-jumped 5-9 Pitt defensive back Marquis Williams for the ball then sprinted to the end zone to make it 14-3.

The Fighting Irish effectively ended any hope Pitt — which has developed a reputation in recent years of being the occasional giant killer — might have had late in the second quarter. Linebacker Bo Bauer’s first career pick set up a 2-yard touchdown run by Kyren Williams that pushed it to 21-3 with 1:29 left in the first half. Three Pitt plays went nowhere and Irish sophomore defensive lineman Isaiah Foskey raced in untouched to block Kirk Christodoulou’s punt. Foskey chased the ball into the end zone to pick it up to put things out of reach at 28-3.

Pitt coach Pat Narduzzi called Notre Dame “as good a team we saw on the football field in six years.”

Freshman quarterback Joey Yellen struggled in his second start in place of Pickett. Yellen, who played well in a loss to Miami last week, completed just 10 of 21 passes for 107 yards and three interceptions before being pulled in the third quarter in favor of Davis Beville. Beville last just one series before Nick Patti came on in the fourth.

Notre Dame: Book used his legs when necessary — he ran for 40 yards before being taken out late in the third quarter with the game well in hand — avoided mistakes. If he can do it again on the road at Georgia Tech next week, a potential Game of the Year with Clemson looms.

Pitt: The Panthers entered October unbeaten. They will exit it with their first four-game losing streak since 2007. The running game and the offensive line continue to be an issue, practically forcing the quarterback — whoever it is — to carry the load. Yellen might be up to it down the road, but he's not there yet.

The Irish aren't going anywhere after handling Pitt with ease.

Pitt's decision to return to the gold-and-blue color scheme that recalled the program's heyday during the 1970s and 1980s was hailed when it was unveiled in 2019. Which made it all the more curious that the Panthers opted for an alternate gray uniform they wore for the first time earlier this season. Considering how one-sided things became, maybe Pitt looking borderline unrecognizable isn't a terrible thing.

Notre Dame: travels to Georgia Tech next Saturday. The Irish won their last meeting with the Yellow Jackets 30-22 back in 2015.

Pitt: The Panthers are off next week then visit Florida State on Nov. 7.