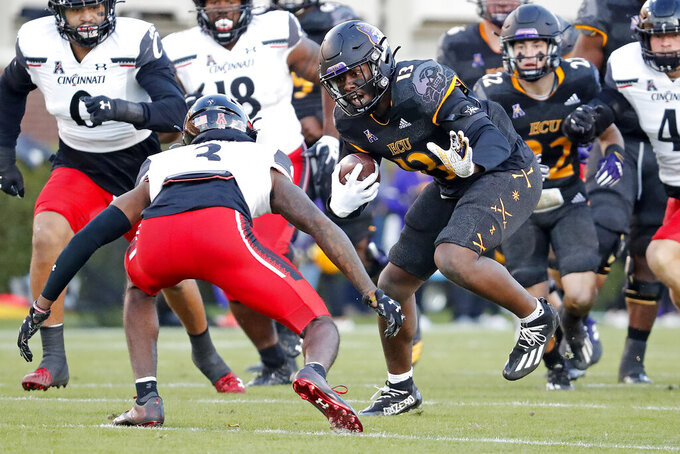 East Carolina's Ryan Jones (13) runs the ball and is challenged by Cincinnati's Ja'von Hicks (3) during the first half of an NCAA college football game in Raleigh, N.C., Friday, Nov. 26, 2021. (AP Photo/Karl B DeBlaker)

The Bearcats handled business in their final road game of the season Friday, beating East Carolina 35-13 in a quest to maintain a spot among the top four in the College Football Playoff rankings.

“We knew there were more things at stake,” coach Luke Fickell said. “It’s great when you have a mature group that you don’t have to go over every little thing. You trust that they’re enjoying it, but they have to understand that to whom much is given, much is expected.”

Desmond Ridder threw two touchdown passes and Cincinnati (12-0, 8-0 American Athletic Conference, CFP No. 4) completed a perfect regular season. The Bearcats are trying to become the first team outside of a Power Five conference to compete in the four-team CFP.

“We got another one and we have to finish strong,” Ridder said.

They’ll be at home when facing Houston next week in the AAC title game.

“Put yourselves in position to play for championships, a lot of other things can happen,” Fickell said.

Defense and special teams helped put the game away for Cincinnati. Arquon Bush blocked a field goal and Ahmad Gardner returned the ball 60 yards for a fourth-quarter touchdown to make it 28-6.

“We always get the job done,” Bush said.

Less than four minutes later, Darrian Beavers intercepted a pass at the 7:27 mark, but the ensuing possession resulted in Cincinnati’s second turnover inside the East Carolina 5-yard line.

The Bearcats had four trips into East Carolina territory that resulted in no points, which let ECU hang around, but never really threaten.

“You see why they’re in contention for a national championship,” East Carolina coach Mike Houston said of the Bearcats. “I thought our kids played really, really hard. I thought they did many things well. … For our young players, it’s a great learning experience.”

Ridder finished 17-for-28 for 301 yards with two interceptions. Alec Pierce caught eight passes for 136 yards. Jerome Ford rushed for 85 yards and a touchdown.

In a matter of four Cincinnati snaps early in the second quarter, the Bearcats went from down 3-0 to up 14-3.

Ridder connected with Leonard Taylor on a 44-yard touchdown play. Cincinnati got the ball back and went 58 yards in three plays, with Ridder’s 53-yard throw to Pierce setting up Ford for a 2-yard scoring run.

After building a 21-3 lead, Cincinnati botched another chance on Ford’s fumble at the East Carolina 3 on its final drive of the first half.

East Carolina closed within 21-6 and then drove to the Cincinnati 5 early in the fourth quarter. But after a penalty, the Pirates were ready to settle for Owen Daffer’s third field goal before Bush disrupted those plans in what seemed like a game-clinching sequence with 11:07 remaining.

The All-America cornerback Gardner grabbed the bouncing ball and was way out in front of the pack for a score.

“I was just making plays as they came,” Gardner said. “I wasn’t trying to be a superhero.”

East Carolina’s winning streak marked its longest string of success in AAC play in its eight seasons as a league member.

The Pirates, facing their highest-ranked team since a 27-10 home loss in 2006 to then-No. 4 West Virginia, were held to 282 yards of total offense.

“It also shows the level of defense that Cincinnati had,” Houston said. “We thought we would be able to run it better, but we couldn’t.”

Holton Ahlers was 19-for-38 for 228 yards, an interception and a 12-yard touchdown pass to Jsi Hatfield.

Cincinnati: The Bearcats wasted numerous scoring chances and that could have haunted them if not for a stellar defensive performance. They gave up only one touchdown and held East Carolina to 54 rushing yards – almost 120 below the Pirates’ season average.

East Carolina: The Pirates, who’ll finish in a third-place tie in the AAC with Central Florida and Saturday’s Tulsa-Southern Methodist winner, were aiming for a rare victory against a Top 25 team. With this result, the Pirates are 13-63-1 vs. Top 25 foes. East Carolina outscored its four AAC visitors in the first quarter by a combined 27-0 this year, but its 77 yards of total offense in the first half Saturday put it in a bind.

Cincinnati wasn’t threatened much in this game, but the bar might be high for the Bearcats. It’s hard to see them climbing after this result, though the performance should be enough to hold steady.

Cincinnati: The Bearcats did not play Houston in the regular season.

East Carolina: Awaits a bowl invitation for its first postseason game since 2014.