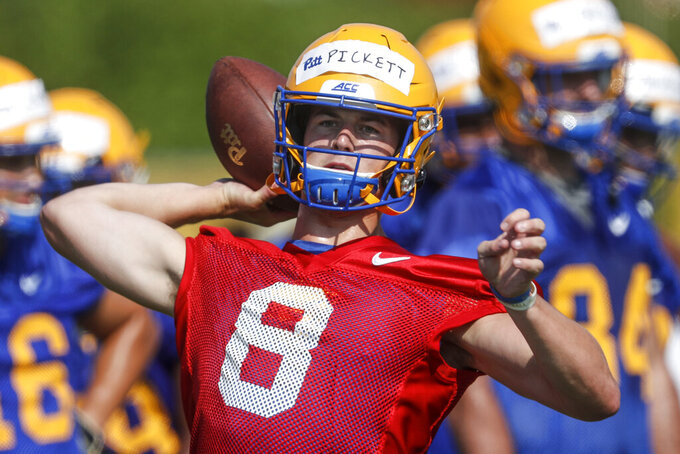 FILE - This Aug. 2, 2019, file photo shows Pittsburgh quarterback Kenny Pickett as he passes in a drill during an NCAA football practice in Pittsburgh. A preseason poll has projected Pitt to finish 4th in their ACC Coastal Division after being the division champion last season. (AP Photo/Keith Srakocic, File)nam 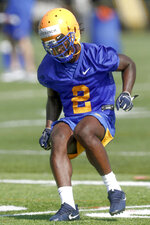 What the numbers failed to show were all the times he would come to the line of scrimmage, survey the defense and check for the right play, a play that was almost always a handoff for a team that relied heavily on the running back tandem of Darrin Hall and Qadree Ollision.

Those heady decisions earned Pickett praise during video review sessions the next morning, even if they didn't fill up the stat sheet with gaudy passing numbers or do much to build on the "Kenny Perfect" moniker bestowed upon him following his electric debut as a freshman at the end of 2017.

"I'm not here to please fans," said Pickett, who threw for 1,969 yards and 12 touchdowns in 2018, both totals that failed to crack the top 10 in the 14-team ACC. "I'm here to please the guys in our locker room, on our coaching staff. So as long as I'm doing right by my teammates first and then the coaches, it's OK with me. I just want to win."

Something the Panthers did enough last season to earn the program its first ACC Coastal Division title . Yet momentum in the Coastal is fickle. No team has repeated as Coastal champions since Virginia Tech in 2011.

For Pitt to get back to Charlotte to face the Atlantic Division winner on the first Saturday in December, the Panthers need the passing game to be more of a threat. Being one-dimensional caught up to Pitt late in the year, when it ended the season with a three-game losing streak that included a lopsided loss to Clemson in which the Panthers managed just eight yards through the air.

New offensive coordinator Mark Whipple was brought in to provide a jolt . He and Pickett holed up during much of the spring and portions of the summer, with Whipple — whose coaching career includes three stops in the NFL — often using tape of NFL stars Tom Brady and Aaron Rodgers to make a point.

The underlying message isn't to expect Pickett to play as they do, but to give him tangible proof that the points Whipple is attempting to make have merit. Consider Pickett a believer. Their meetings didn't focus so much on what play Whipple called but why he called it, a process that Pickett says has allowed him to become a coach on the field. The trickle down has generated a greater buy-in by the offensive players as a whole.

"He's way more confident and way more stronger to where he can handle what he has to do," senior wide receiver Maurice Ffrench said. "He's more mature now. Me and him sit down and watch film with one another and read everything and I understand and pick his brain to: 'Where do you want me to be? How do you want me to run this route?' That's how our whole receivers' room is. Just to be on the same page."

Other things to watch for as Pitt looks to prove its unlikely rise from a 2-3 start to a spot in the ACC title game last year was no fluke.

"I think for the most part they understand what we're trying to get done, but there's so many little nuances that it just takes time to learn," running backs coach Andrew Powell said. "It's going to take some time. We're going to be patient and we'll figure out who can play winning football and we'll try to get them in a position to help us win."

Pitt coach Pat Narduzzi built his resume by constructing intimidating defenses at Michigan State. Now in his fifth season with the Panthers, he might be doing the same at Pitt. However, there are serious questions at linebacker — which is trying to replace three starters — and at defensive end after Rashad Weaver was lost for the year because of a knee injury. There is plenty of experience in the secondary and along the defensive line even with Weaver out.

The schedule is heavy on home games early, putting the onus on Pitt to deliver on the road last. Visits to Georgia Tech on Nov. 2 and Virginia Tech on Nov. 23 will go a long way toward determining whether the Panthers are legitimate contenders in the Coastal.

The Panthers open the season by hosting Virginia on Aug. 30. Pitt is 5-1 against the Cavaliers since joining the ACC. Beating Virginia, the preseason pick to win the Coastal, would be an important first step to a repeat.