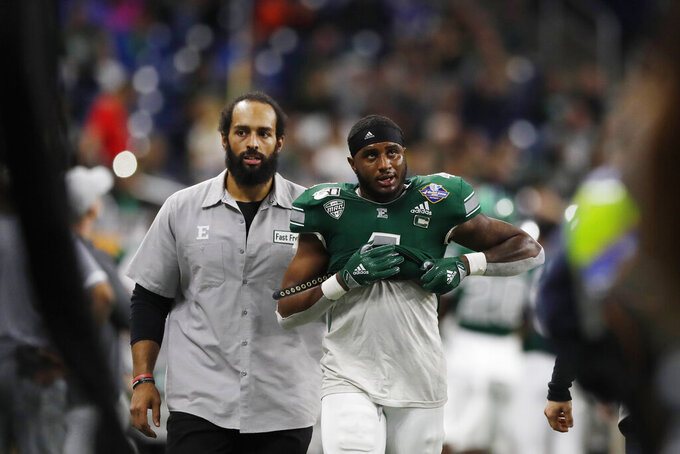 Eastern Michigan defensive back Kevin McGill (4) is escorted to the locker room after being disqualified during the second half of the Quick Lane Bowl NCAA college football game against Pittsburgh, Thursday, Dec. 26, 2019, in Detroit. (AP Photo/Carlos Osorio)

DETROIT (AP) — Pittsburgh players took punches, and one was hit with spit, and the Panthers still kept their cool in critical moments to win a bowl game for the first time in five appearances under coach Pat Narduzzi.

Kenny Pickett threw a 25-yard touchdown pass to Taysir Mack with 47 seconds left and the Panthers held on to beat Eastern Michigan 34-30 in the Quick Lane Bowl on Thursday night.

After taking its first lead of the game in the final minute, Pittsburgh (8-5) forced Eastern Michigan to turn it over on downs from its 40 to seal its first bowl victory since winning in Detroit six years ago with former coach Paul Chryst.

The Eagles (6-7) came up just short in a closely contested game just as they did in three previous bowls with coach Chris Creighton and the usually disciplined team unraveled at times.

“There's absolutely no excuse for any of that,” Creighton said. “They're embarrassed by it. They apologized to the team. I'm embarrassed. I apologize to anybody's who's watching."

Glass was 28 of 50 for 311 yards with two touchdowns and an interception. The senior also ran for 83 yards and a score.

“I let God and my family down!" Glass posted on his account.

Pickett completed 27 of 39 passes for 361 yards and three scores, including a school-record, 96-yard TD pass to Maurice Ffrench that tied the game in the second quarter. Ffrench finished with 12 catches for 165 yards.

“They had some explosive plays that were the difference in the game,” Creighton said.

Ffrench had 96 receptions this season, breaking Larry Fitzgerald's school record of 92 set in 2003.

“That's with missing a couple games,” Narduzzi said. “He fought back with that broken jaw.""

The marks were marred by the punches Glass threw late in the game.

“He's in tears in the locker room, begging me to talk to the team before I could say a word,” Creighton said. “He made a mistake and he is truly sorry for it. I'm ultimately responsible for it and I'm embarrassed, but I love him 100 percent."

Pitt: Coaching continuity with offensive coordinator Mark Whipple returning for a second season should help the program. The offense showed some signs of life in the bowl game after scoring 20 or fewer points in eight games this season.

Eastern Michigan: The program is on solid footing, earning consecutive bowl bids for the first time and three in four years after previously doing it only once as a Division I team. The Eagles will just have to hope they can keep Creighton away from Power Five conference schools.

The game drew a lot of green-and-white clad fans, cheering for the Eagles, whose campus is about 30 miles from Ford Field. The attendance was 34,765, the largest crowd to watch a Quick Lane Bowl since it was created in 2014.

“Awesome,” Creighton said. “Six years ago, the vision was to try to make the football program a source of pride for the athletic department, for the university, for Ypsilanti (Michigan) and even the region.

Pitt: Hosts Miami of Ohio on Sept. 5. The Panthers will have a chance to be very good on defense if defensive lineman Jaylen Twyman, Patrick Jones and safety Paris Ford all choose to stay in college instead of entering the NFL draft.

Eastern Michigan: Plays at Kentucky on Sept. 5. The Eagles will be breaking in a new quarterback, attempting to replace Glass. Preston Hutchinson and Jairus Grissom gained some experience in 2019 and will likely have a shot to start next season.