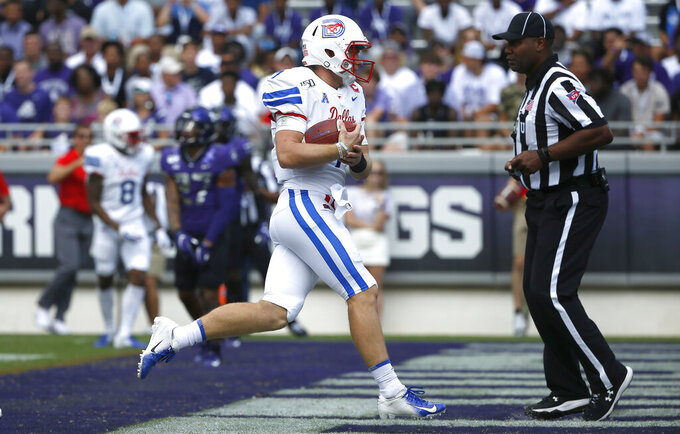 SMU quarterback Shane Buechele (7) carries the ball into the end zone for a touchdown against TCU during the first half of an NCAA college football game Saturday, Sept. 21, 2019, in Fort Worth, Texas. (AP Photo/Ron Jenkins)

FORT WORTH, Texas (AP) — While SMU coach Sonny Dykes and new quarterback Shane Buechele are focused on this season, they do understand the historical context of a win over longtime rival TCU that has the Mustangs 4-0 for the first time since 1984.

That was back in the old Southwest Conference days, only a few years from crippling sanctions that kept the Mustangs from even fielding a team in 1987 and 1988 after the NCAA's so-called death penalty.

"I haven't been here 35 years. It's a big deal for our fans, and I get it," said Dykes, in his second season on the Hilltop after being an offensive analyst at TCU. "I don't try to get caught up in all of that stuff during the season, just because I think it's a bit of a distraction. ... Look, I appreciate winning."

Shane Buechele was 23-of-34 passing for 288 yards with two touchdowns and ran for another score as SMU held on to beat the 25th-ranked Horned Frogs 41-38 on Saturday, ending a seven-game losing streak in the 99th meeting between the schools.

"It's important for our fans to stay behind us. It's really important for those guys to have our back," said Buechele, the former Texas quarterback who is one of SMU's seven graduate transfers. "We have their back. We need to roll together as a team."

The Mustangs went ahead to stay after jumping ahead 15-0 in less than 10 minutes. They held on after true freshman Max Duggan's third touchdown pass of the second half for TCU with 3:37 left.

TCU (2-1) got the ball back after a three-and-out by SMU, including a third-down snap that Buechele wasn't ready for that resulted in a 23-yard loss. The Horned Frogs got the ball at the SMU 41, but Duggan's fourth-down pass never had a chance after TCU coach Gary Patterson opted against trying a 51-yard field goal attempt in the final minute.

Xavier Jones ran for 79 yards with a touchdown, and caught a 3-yard TD early in the fourth quarter for a 38-24 lead. That ended an 84-yard drive that started when TCU running back Sewo Olonilua lined up in wildcat formation on fourth-and-1 and was sacked for a 6-yard loss when he looked to pass.

Olonilua fumbled at TCU's 4 in the first quarter, giving SMU the ball back right after Buechele was stuffed for no gain on fourth-and-goal from the 1. That set up a 1-yard TD run by Jones.

"It's a simple thing. We got outplayed. We got outcoached," Patterson said.

Darius Anderson ran for 161 yards and two touchdowns for TCU. Duggan, after going 1-of-10 for 22 yards in the first half finished 16 of 36 for 188 yards and his three touchdowns. He didn't have an interception, but fumbled twice.

"It's hard. It's a tough loss," Anderson said. "We've got execute, do our job, make less mistakes."

On the same play Buechele had a pass intercepted in the end zone in the second quarter, the helmet of an SMU offensive lineman was ripped off his head by a defender and heaved from around the 30 to near the end zone. Dykes was livid that no penalty was called, and officials told him that they didn't see it.

"I just saw the helmet flying. I didn't see who threw it," Dykes said. "It went about 30 yards. ... Go try to do that sometimes and see how far you can throw a helmet. It was really impressive."

SMU: The Mustangs had lost the last seven in the series by an average margin of four touchdowns. Buechele, who was 0-2 against TCU with the Longhorns, has two big receivers in James Proche (10 catches, 66 yards, one touchdown) and Reggie Roberson Jr. (four catches, 122 yards), a former transfer from West Virginia.

TCU: Duggan finished strong, including two TD passes to Pro Wells. "We didn't win. That's how all quarterbacks get judged," Patterson said. Graduate transfer Alex Delton started the first two games. The Frogs were coming of a three-touchdown road win against Big Ten team Purdue, and had allowed only 209.5 total yards per game.

TCU will fall out of the Top 25, a week after getting ranked and making it 15 seasons in a row to appear in the poll. SMU didn't get any votes in the AP poll last week, and hasn't been ranked since 1986.

TCU stays at home next Saturday to open Big 12 Conference play against Kansas.