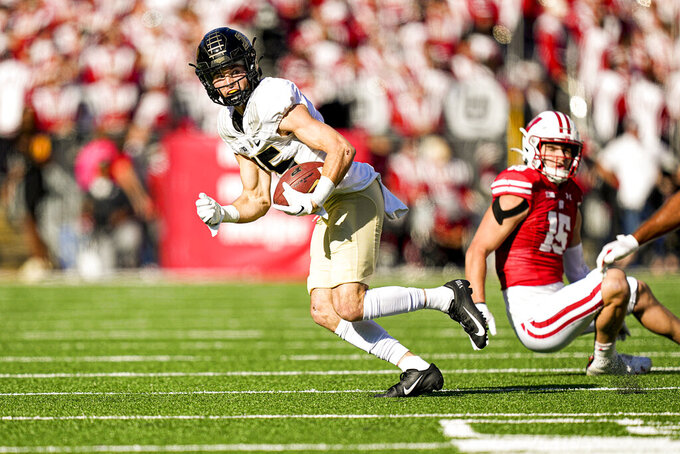 Things to watch during Week 10 of play in the Big Ten Conference:

Call this the “Charlie Jones Bowl.” The Big Ten's leading receiver caught Iowa off-guard when he announced his transfer to Purdue after spring practice. It's been a good move for Jones, whose 72 receptions are more than three times as many as he had last year. He's on track to give the Boilermakers a 1,000-yard receiver for a fourth straight year, not counting the shortened 2020 pandemic season. Purdue needs to win here to keep pace with, or tie, West Division-leading Illinois.

The Terrapins can earn a fourth Big Ten win, which would be their most since they won the same number in their first year in the conference (2014). They also can extend their conference win streak to three games, which would be their longest since they won five in a row in the Atlantic Coast Conference in 2009. Wisconsin is coming off an open date following a home win over Purdue. The Badgers can win consecutive games for the first time this season.

Minnesota RB Mohamed Ibrahim goes into his game at Nebraska with 16 straight 100-yard performances, the longest streak since Arizona's Ka’Deem Carey had 16 in a row from 2012-13. ... Nebraska's 29 yards in the second half against Illinois last week were its fewest in a half at home since at least 2000, according to Sportradar. ... Penn State is 10-2 in games at Indiana, with both losses coming since 2013. ... Michigan makes its first visit to Rutgers since escaping with a 48-42 triple-overtime win in 2020. The Wolverines were down 17 points in the first half before QB Cade McNamara led a comeback. McNamara is now the backup to J.J. McCarthy.

Michigan State is a 16 1/2-point road underdog against Illinois, according to FanDuel Sportsbook. The Spartans will be missing eight players who were suspended for their roles in the melee in the Michigan Stadium tunnel last week. Among them will be defensive star Jacoby Windmon. Illinois, which made its first appearance in the College Football Playoff ranking at No. 16, is going for its first seven-game winning streak since 2001.

Everyone wants to know what Ohio State DE J.T. Tuimoloau will do — or can do — for an encore when he and the Buckeyes visit Northwestern. Tuimoloau was in on four turnovers that led to 21 points against Penn State — a pass deflection that was intercepted, two interceptions and a forced fumble. He had two sacks, another tackle for loss and three other tackles to go with a pick-six, forced fumble and a fumble recovery.