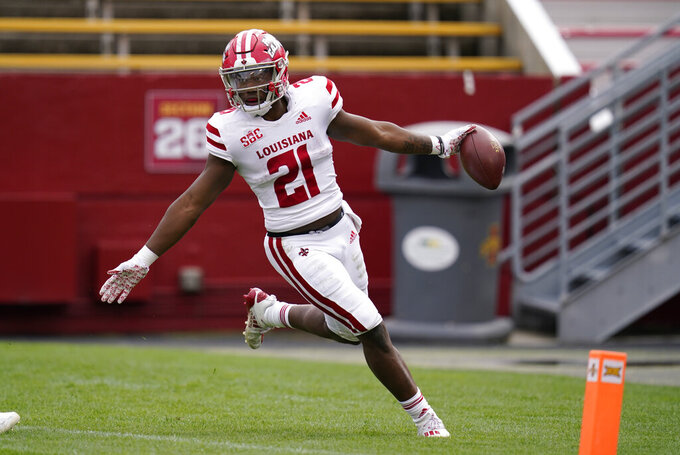 Louisiana-Lafayette running back Chris Smith celebrates after returning a kickoff 95-yards for a touchdown during the first half of an NCAA college football game against Iowa State, Saturday, Sept. 12, 2020, in Ames, Iowa. (AP Photo/Charlie Neibergall)

AMES, Iowa (AP) — Perseverance, confidence and two long kick returns propelled Louisiana-Lafayette to one of its biggest wins in program history, 31-14 win over No. 23 Iowa State on Saturday.

The Ragin' Cajuns beat a Top 25 opponent on the road for the first time, having gone 0-26 against ranked foes away from home. Their only other win over a Top 25 team was in 1996 at home against Texas A&M.

“We've got a lot of belief that the University of Louisiana should always have a competitive team,” coach Billy Napier said. “We’re fortunate we got the necessary things from our administration. They decided they wanted to have an exceptional Group of Five football program. They gave us the money to go hire the people, they’ve given us the resources inside the building to really run a Power Five operation. This is what we expected to happen.”

Both offenses seemed overmatched at times, but the Ragin’ Cajuns were ignited by Chris Smith’s 95-yard kickoff return in the second quarter and Eric Garror’s 83-yard punt return in the third.

Lewis passed for 154 yards and contributed to a business-like approach by the Ragin' Cajuns, who didn't celebrate much on the field after the game.

“All because we expect that,” Lewis said. “The type of work we put in, the hours. All of us pretty much say our practices are harder than the games.”

The Ragin' Cajuns limited Cyclones quarterback Brock Purdy to 16-of-35 passing for 145 yards, with no touchdowns and an interception. It was ISU's fewest passing yards in two years.

“We dropped some balls that are difference makers in the first half and early in the second half,” Iowa State coach Matt Campbell said. “Getting into a really good rhythm was hard to find.”

Iowa State's Breece Hall rushed for 103 yards and a touchdown on 20 carries.

The Cyclones' offense sputtered early with a series of dropped passes before putting together consecutive touchdown drives of 49 and 69 yards.

Smith put Louisiana-Lafayette on the board immediately after Iowa State's first score. The Ragin' Cajuns drove 61 yards in the final 70 seconds of the first half, pulling within 14-10 on Nate Snyder's 30-yard field goal.

“Give credit to their team,” Campbell said. “A really veteran football team that came in here and in the second half just really dominated the game.”

The Ragin' Cajuns, like other teams across the country, had stops and starts with preparations since the spring because of the coronavirus pandemic. The last month has been especially difficult. Assistant coach D.J. Looney died of a heart attack on Aug. 1, and Hurricane Laura devastated parts of Louisiana in late August.

“I can’t help but think my man D.J. is up there smiling right now,” Napier said.

Iowa State: The Cyclone offense was hampered by the absence of tight end Charlie Kolar, who caught 51 passes and scored seven touchdowns last season. He was out with a lower body injury. Right guard Robert Hudson also missed the game.

Louisiana-Layette: The Ragin' Cajuns were able to knock off the Cyclones despite two missed field goals by transfer kicker Nate Snyder and a struggling ground game. Louisiana-Lafayette averaged 6.3 yards per rush last season while totaling 3,604 yards. Iowa State limited the Ragin' Cajuns to 2.7 yards on 22 attempts through the first three quarters.

BRIGHT DAY FOR THE SUN BELT

“You can’t underestimate a Sun Belt Conference team anymore,” Napier said. “It’s become a normal thing. You put a Sun Belt team on your schedule, you better watch out.”

Iowa State is 4-20 when trailing after three quarters under Campbell. The Cyclones are also 8-16 with a negative turnover margin. They had two turnovers against Louisiana-Lafayette; the Ragin' Cajuns had none.

Iowa State began the season ranked for a second straight year, but will likely drop out of the poll this week. The Cyclones were 3-0 all-time against Sun Belt Conference opponents and listed as double-digit favorites going into Saturday's game.