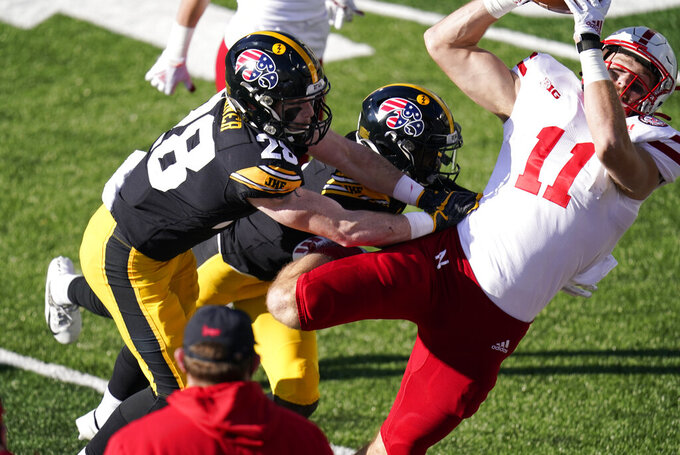 PISCATAWAY, N.J. (AP) — The Big Ten Conference didn't have to spend much time thinking in deciding to match Rutgers and Nebraska in a game on Friday night during championship week.

While the Cornhuskers (2-5, 2-5 Big Ten) and Scarlet Knights (3-5, 3-5) aren't rivals, their records are similar and they have something in common this year — Rutgers quarterback Noah Vedral. He left Nebraska after last season and transferred to the state university of New Jersey.

The only question is whether Vedral will play in the contest at SHI Stadium. He injured an ankle in last week's overtime win at Maryland and his status is uncertain. He left the field on crutches.

“Noah is doing everything possible to play this game,” Rutgers coach Greg Schiano said. “He would do that no matter who we were playing, but certainly with it being Nebraska he’s even extra motivated. I can’t tell you right now what it’s going to look like. It may be so darn cold he won’t know his ankle is hurting him. We’ll see.”

Vedral came to Rutgers looking for more playing time. He won the quarterback competition, has started seven games and led the most improved offense in the conference. The Scarlet Knights have scored 219 points in eight games. They tallied 51 in failing to win in nine conference games last season.

Cornhusker junior tight end Austin Allen hopes Vedral can play. They played basketball in middle school in Nebraska, were on the same AAU team and talk a lot.

“I mean, just ‘cause he went to another school, it’s not like I’m going to just completely put him off to the side,” Allen said. “He’s still one of my good friends. We chat football all the time. He’s been doing great things at Rutgers. He’s been ballin’ out, and that’s good for him because he’s an athlete. I think he really deserved in a lot of ways to be an athlete somewhere.”

Vedral appeared in six games for Nebraska last season, starting two. He began his career at Central Florida in 2017 and followed coach Scott Frost to Nebraska when he left after an undefeated season.

“You know I care a lot about Noah, and he did a lot for us and put a lot of effort into working hard for us and I want what’s best for him,” Frost said. "But we’ll try to protect ourselves on Friday.”

If Vedral can't go, Schiano will start either Art Sitkowski or Johnny Langan.

All three of Rutgers' wins has been on the road. They won at Michigan State, Purdue and Maryland. The last time Rutgers won three conference road games was 2012, when it went 3-1 as a member of the Big East Conference. Rutgers also has matched its highest conference win total since joining the Big Ten in 2014. The Scarlet Knights had three Big Ten wins in 2014 and 2017.

Last week’s loss to Minnesota gave Frost the distinction of reaching 20 losses faster than any coach at Nebraska since Bill Jennings, who led the Huskers from 1957-61. Frost is 11-20 in 31 games. Jennings was dealt his 20th loss in his 26th game.

Rutgers wide receiver Bo Melton ran for two touchdowns against Maryland. The senior is second in the league with nine touchdowns (six receiving, two rushing, one punt return) and has 42 receptions for 557 yards.

Melton has three multiple touchdown games this season and he has led the team in receiving yards in six games. The son of a former Rutgers player has eight catches for at least 20 yards, including two of more than 60 yards.

This will be the second straight year Nebraska has been unable to win consecutive Big Ten games. After beating Penn State, the Huskers were 16-point favorites at home against Illinois and lost 41-23. They beat Purdue on the road, then lost 24-17 as double-digit favorites against a Minnesota team missing 33 players because of COVID-19 and injuries.