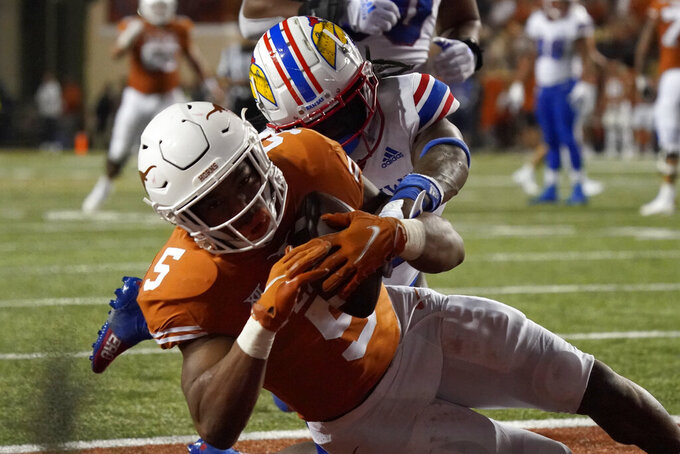 Texas running back Bijan Robinson (5) catches a touchdown pass against Kansas during the second half of an NCAA college football game in Austin, Texas, Saturday, Nov. 13, 2021. (AP Photo/Chuck Burton)

AUSTIN, Texas (AP) — Star Texas running back Bijan Robinson will miss the rest of the season after dislocating his elbow in the Longhorns' loss to Kansas, coach Steve Sarkisian said Monday.

Robinson's 1,127 yards rushing this season rank third in the Big 12 and made him the first Texas running back to hit the 1,000-yard mark since 2016. He also had 11 rushing touchdowns, and five more receiving.

Robinson was injured in the third quarter of the 57-56 overtime loss that sent Texas to its fifth consecutive defeat, the program's longest skid since 1956.

Texas (4-6, 2-5 Big 12) plays Saturday at West Virginia and at home Nov. 27 against Kansas State, and must win both to be eligible for a bowl game. Texas hasn't had a losing season or missed a bowl game since 2016.

By Greg Beacham 17 minutes ago
By Ralph D. Russo 3 hrs ago
By Andrew Welsh-Huggins 7 hrs ago
By The Associated Press 8 hrs ago
16 hrs ago