Tar Heels, No. 24 Wolfpack highlight weekend in the ACC 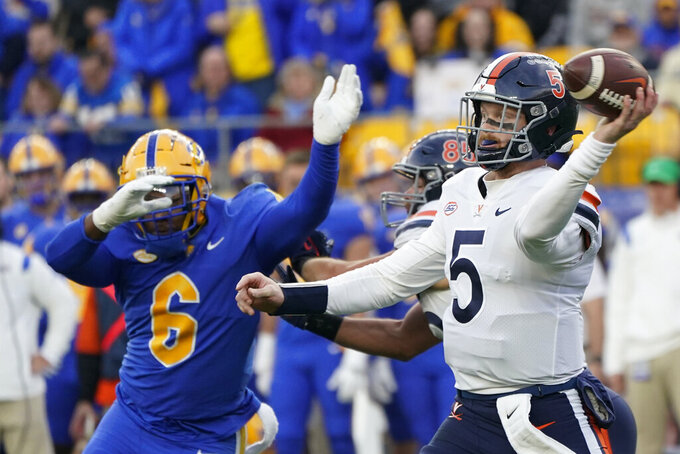 Virginia quarterback Brennan Armstrong (5) gets a pass away as Pittsburgh defensive lineman John Morgan III (6) pressures him during the first half of an NCAA college football game Saturday, Nov. 20, 2021, in Pittsburgh. (AP Photo/Keith Srakocic)

North Carolina (6-5, 3-4) at No. 24 NC State (8-3, 5-2). The mercurial Tar Heels can end the Wolfpack's hope of an Atlantic Division title with a victory in the 111th installment of the rivalry. N.C. State needs to win and have Boston College beat No. 21 Wake Forest in Chestnut Hill, Massachusetts, to claim the division. UNC has scored 58 or more points three times this season, all in victories. N.C. State ranks 13th nationally, allowing just 18.7 points per game, and has won nine straight games at home.

Virginia Tech at Virginia. The Hokies (5-6, 3-4) have dominated this series, winning 16 of the last 17 meetings, and they need another win to become bowl eligible under interim coach J.C. Price. Virginia (6-5, 4-3) has lost three in a row, all against ranked teams, and is coming off a 48-38 loss at No. 20 Pittsburgh that took the Cavaliers out of the running for the Coastal Division title.

No. 1 Georgia (11-0) at Georgia Tech (3-8). The Yellow Jackets have won three games in each of coach Geoff Collins' three seasons, and that doesn't figure to change when they face the top-ranked Bulldogs.

The ACC record for teams being bowl eligible is 11, and nine have already achieved the six wins required. Three more could make it this weekend. Virginia Tech needs a victory at Virginia, Florida State (5-6) needs a victory at Florida and Syracuse (5-6, 2-5) needs to beat Pittsburgh at home to qualify

The return of Virginia QB Brennan Armstrong made their game at Pittsburgh competitive, and he figures to have great impact when the Cavaliers face Virginia Tech, seeking their second victory in the last 18 meetings. The left-hander threw for 487 yards and three touchdowns against the Panthers.