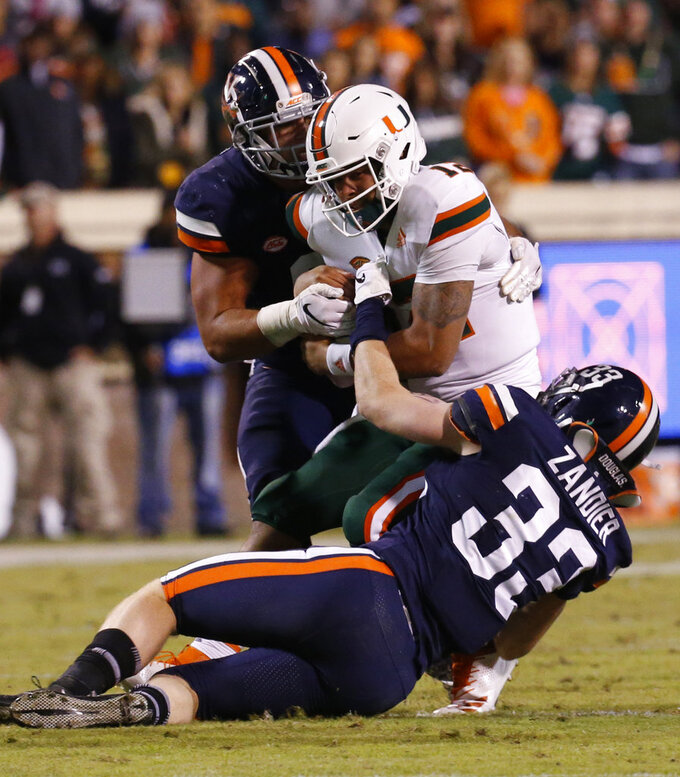 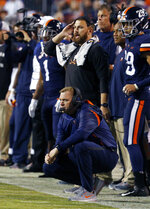 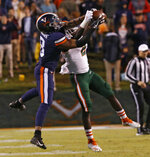 CHARLOTTESVILLE, Va. (AP) — All week long, Bronco Mendenhall said, he had a sense that Virginia was ready to perform on a big stage.

The Cavaliers proved their coach right Saturday night, getting a touchdown from Jordan Ellis, three field goals from Brian Delaney and a stout defensive performance in a 16-13 victory over No. 16 Miami.

"They're becoming resilient and they are becoming confident and they acknowledge and see that happening," said Mendenhall, in his third season at Virginia. "For me and my staff, it's just fun to watch them transforming."

Ellis scored on a 7-yard run in the first half and Delaney connected on kicks of 26, 46 and 32 yards for the Cavaliers (4-2, 2-1 Atlantic Coast Conference). Miami appeared to have stopped Virginia on a third-down run in the final minutes, but a personal foul call against Tito Odenigbo kept the drive alive and the Cavaliers ran out the clock.

Delaney kicked a fourth field goal with 30 seconds left, but was run into on the play, giving Virginia a first down.

As the final seconds ticked off the clock, fans streamed down the hill at one end of the stadium and onto the field.

The Hurricanes (5-2, 2-1) scored on an 11-yard run by Malik Rosier with 3:04 left, pulling them to 16-13, but when they tried an onside kick, Virginia tight end Evan Butts fielded it and returned it 30 yards to the Miami 27. The Hurricanes used all three of their timeouts to stop the clock, but Odenigbo's personal foul after Bryce Perkins was stopped a yard short of a first down foiled their comeback bid.

Miami came in averaging 41.5 points and after an emotional victory last weekend over Florida State. In that game, the Hurricanes trailed 27-7 before N'Kosi Perry threw four touchdown passes in a 28-27 victory. Perry lasted only four series against the Cavaliers and was pulled after throwing his second interception.

The Hurricanes other best scoring chance came in the second quarter after Travis Homer's 70-yard run to the Cavaliers' 15, but two running plays netted just five yards and Malik Rosier threw incomplete on third down and they had to settle for a 28-yard field goal by Bubba Baxa. Baxa also connected from 47 yards earlier in the quarter.

On Homer's long run, Bryce Hall ran him down, knocking him out of bounds at the 15.

"That might have been my favorite play," Mendenhall said.

"I saw him break free. I literally just went into another zone," Hall said. "I put my head down, pumped my arms, pumped my legs and I just took off on a mission to try and get him."

Virginia's first against a ranked opponent in four years.

Miami: One week after leading the Hurricanes to their biggest comeback victory in the history of their series with Florida State, Perry was removed after four series. Rosier played the rest of the way and was 12 of 23 for 170 yards with one interception. "I felt like we needed a more mature guy whose been through a lot more situations," Richt said. "I felt like it was time to give Malik a shot."

Virginia: The Cavaliers overcame three first-half interceptions by Bryce Perkins and may have stamped themselves as players in the Coastal Division race with the victory.

"We can't let off the gas," Perkins said. "We have to keep going to Duke and play just how we played tonight with the same aggression."

Miami has next weekend off and plays at Boston College on Friday, Oct. 26.

Virginia goes on the road to face Duke.