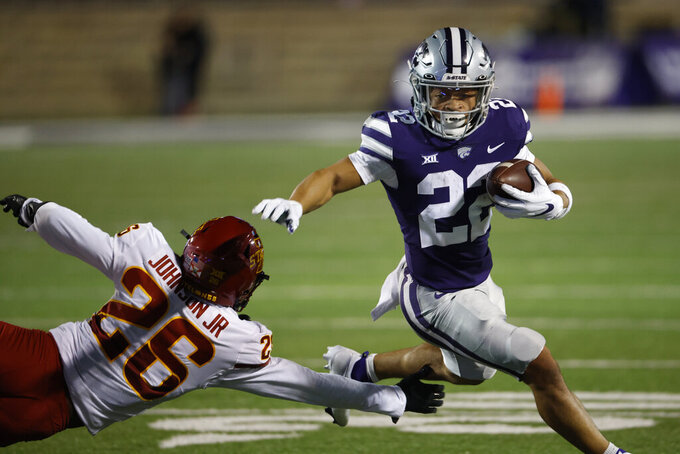 Kansas State running back Deuce Vaughn (22) gets past Iowa State defensive back Anthony Johnson Jr. (26) for a first down during the first quarter of an NCAA football game on Saturday, Oct. 16, 2021, in Manhattan, Kan. (AP Photo/Colin E. Braley)

“You have to make your own plays,” he said.

Vaughn has made lots of those — and in different ways — the last two years, and he's got plenty of company in the Big 12 this season.

Seven conference players are in the top 26 spots on the NCAA’s all-purpose yards chart, three more than the next closest conference. Only one Big 12 player ranked in the top 40 each of the previous two years.

The conference has one of its best collections of versatile running backs. Leading the way is Texas' Bijan Robinson, who is nearing 1,000 yards rushing, has more than 200 receiving and is third nationally with 161.6 all-purpose yards per game.

Iowa State's Breece Hall, 10th in the nation at 143.9 yards per game, had four straight 100-yard rushing games before being held to 70 by Oklahoma State last week. On the Cyclones' winning drive against the Cowboys, he gained 30 yards on a catch-and-run before he scored the go-ahead touchdown.

“When he’s at his best, it’s hard to find a better player in terms of the running back position," ISU coach Matt Campbell said. “When Breece plays well, we seem to have great flow in our offense.”

Perhaps the biggest do-it-all man in the league is Baylor's Trestan Ebner, who is averaging 140.4 all-purpose yards per game as a rusher, receiver and kick and punt return man. He's run back a kick for a touchdown and leads the Big 12 with his 9.8-yard punt return average.

And then there's Vaughn, who in two seasons has established himself as one of the country's top all-purpose players.

This year, Vaughn has 897 scrimmage yards (595 rushing, 302 receiving) and 10 touchdowns. In his 17-game career overall, he's earned at least 100 scrimmage yards in 12 of them (including all seven this season). He ranks fourth nationally among active players in career all-purpose yards per game (124.59).

Vaughn's dependability has been especially important as the Wildcats have had to deal with injury issues at quarterback.

“People are always knowing where Deuce is,” K-State coach Chris Klieman said, “which opens up a lot of guys in the pass game.”

Vaughn is the Wildcats’ leading receiver, and he’s first among Big 12 running backs with 30 catches and 40 targets. According to Pro Football Focus, Vaughn leads K-State with 10 missed tackles forced after the catch.

As a running back, he's averaging 4.9 yards per carry and is tied with Robinson for the Big 12 lead with 32 plays from scrimmage of at least 10 yards.

“I think he’s an underrated running back,” Klieman said. “And what I mean by that is everybody knows his ability to catch the ball out of the backfield and make people miss and get matchup problems there, but just in our two-back offense, behind a fullback or one-back set ... he’s such a terrific running back with great vision and great balance and sees things so well.”