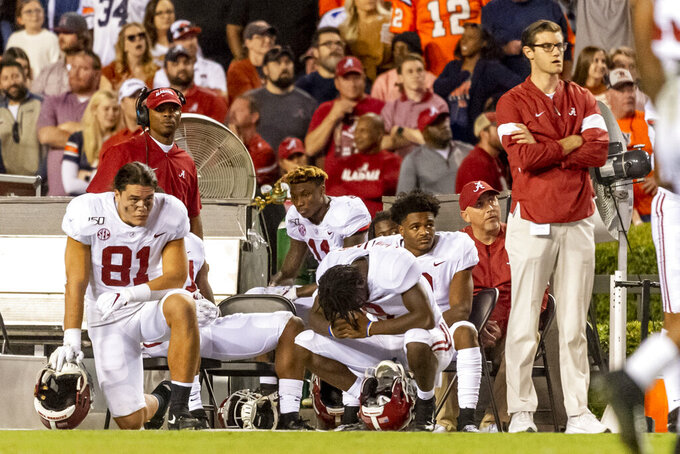 Alabama looks on after missing a field goal that would have tied an NCAA college football game against Auburn during the second half Saturday, Nov. 30, 2019, in Auburn, Ala. (AP Photo/Vasha Hunt)

Sometimes it is just not your year. Even if you are the greatest dynasty in college football history.

The playoff will be played without Alabama for the first time after No. 16 Auburn won a wild Iron Bowl on Saturday.

So that’s it. No debates about resumes, eye tests or how much the Crimson Tide would be favored on a neutral field against this team or that.

No. 5 Alabama has lost two regular-season games for the first time since 2010. Nick Saban’s Tide has not only won five national championship since 2009, but three other times it entered the postseason with a chance to win it. Twice it lost to Clemson in the national championship game. Once Urban Meyer’s Ohio State team knocked Alabama out in the first round of the playoff.

The last time Alabama was relegated to just a bowl game was 2013, when the Kick-Six sent Alabama to the Sugar Bowl where it lost to Oklahoma.

Of course, another failed field goal in the Iron Bowl played a part in the Tide’s demise this time.

This season will be seen as something of a failure — or at least a disappointment — in Tuscaloosa. But think about everything it took to take down the Tide.

The defense was faulty most of the season after a string on injuries left Alabama leaning on freshman linebackers. The Tide lost by five to No. 1 LSU, with a gimpy Tua Tagovailoa making a couple of uncharacteristic mistakes. Then Alabama lost Tagovailoa for good to a hip injury.

The Tide’s playoff hopes were shaky at best going into the Iron Bowl, with backup quarterback Mac Jones leading the way. Jones had his moments, good and bad. He threw two picks returned for touchdowns, including one that bounced off a receiver’s back when the Tide was on the door step. Alabama doinked a 30-yard field goal that would have tied it, and committed 13 penalties, including a game-ender. And Auburn benefited from a video review stoppage that let the Tigers get off a field goal with a second left in the first half.

All that happened to Alabama, and it lost by three to a top-15 team.

The dynasty is most certainly not dead, but Alabama is out of it in November and in this era of college football that is a very big deal.

HERE WE ARE AGAIN

Over the last 19 years, Ohio State is 17-2 against Michigan. That includes the coaching tenures of Jim Tressel, Urban Meyer and now Ryan Day, who moved to 1-0 by dropping 56 on the 10th-ranked Wolverines.

Under Harbaugh, Michigan is 0-5 against Ohio State and only one of those games was close. Harbaugh has done many things right at Michigan. The Wolverines had slipped into a dark place after Lloyd Carr retired in 2007. In seven seasons under Rich Rodriguez and Brady Hoke, Michigan went 46-42 with three losing seasons.

Michigan lured Harbaugh back to his alma mater with a mountain of money to fix the Wolverines and he has pretty much done that. Michigan is 47-17 under Harbaugh and with a bowl victory it will have had four 10-win seasons. Harbaugh’s winning percentage is currently .734. Carr’s was .753 in 13 seasons at Michigan. Bo Schembechler’s was .796 in 21 seasons as Wolverines’ coach.

Harbaugh does not have a big-game problem. His teams have beaten highly ranked teams from Wisconsin, Penn State and Notre Dame. He has flipped the Michigan State rivalry back in the Wolverines’ favor. He just can’t beat Ohio State.

While Harbaugh has done well to re-establish Michigan as a consistent top-10 to -15 program, Ohio State has taken off like rocket ship, going 95-9 in the eight seasons since Meyer took over. After Alabama and Clemson, the Buckeyes are in the next tier of elite programs that includes ... maybe Oklahoma. Maybe Georgia? LSU this year.

The Buckeyes that rolled into the Big House on Saturday might very well be the best of this era, which includes the 2014 national champions.

Harbaugh is going nowhere unless he unexpectedly decides he wants to try the NFL again. He certainly sounded as if he was tired of answering the same questions every year about how to explain the gap between the Buckeyes and Wolverines.

To think a different coach would fix this for Michigan seems to miss the depth of the problem. Harbaugh has made Michigan as good as it has always been. The problem is Ohio State is better than it has ever been.

Clemson coach Dabo Swinney has really played up the “slight” of being just the No. 3 team in the country this season.

After trouncing South Carolina, Swinney said: “I mean, we've got to go (undefeated). We've got to go 30-0. We ain't got no choice. Because we don't play nobody.”

It’s getting a little old, but Swinney has made a living (a really good one) on being the guy who proves everybody wrong. Lil’ ol Clemson is long gone, but everybody loves to play the disrespect card. Plus, what better way to get your team, which is a four-touchdown favorite every week, focused when the opponents might not?

Playoff skeptics have always worried a postseason tournament could make late-season games involving highly ranked teams less important, that teams could be playing for seeding. Well, that’s sort of the case heading into this championship weekend.

No. 1 LSU and No. 2 Ohio State (flip-flop that order in the CFP rankings) appear to be in good shape to make the playoff no matter what happens in their respective championship games.

The Tigers face No. 4 Georgia. A Bulldogs victory likely means two Southeastern Conference teams in the final four. Ohio State gets a rematch with Wisconsin, which has already lost twice.

No. 3 Clemson might not have the luxury of a loss against three-touchdown underdog Virginia in the ACC title game.

AROUND THE COUNTRY: Every Wisconsin-Minnesota game should be played in the snow. The Badgers sank the Gophers and locked up the Big Ten West and a rematch with Ohio State next week in Indianapolis. If form holds, and the Buckeyes take care of the Badgers, who goes to the Rose Bowl as the Big Ten’s rep? Penn State (10-2), which lost to Minnesota (10-2)? The Gophers, who have not been there since 1962? Or the Badgers, who will have lost twice to Ohio State and to Illinois? The game takes the highest-ranked team by the playoff selection committee. Good bet that will be Penn State. ... There should be a place on the All-America team for Lynn Bowden, the receiver-turned-quarterback who saved Kentucky’s season. Bowden ran for 284 yards and four touchdowns as the Wildcats beat rival Louisville. He attempted two passes, completing one for 4 yards, but the Wildcats ran for 517 yards, the most against an FBS opponent this season. Bowden finished the season by going over 100 yards rushing in six of the last seven games. ... There will be no 5-7 teams necessary to fill the 78 bowl slots this season. Kent State against Eastern Michigan and Boston College against Pitt pulled small upsets to get to 6-6.