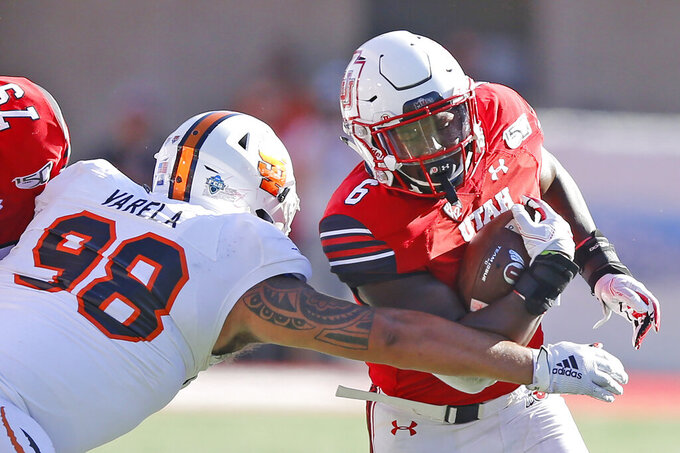 The Arizona Wildcats are preparing for not one but possibly three Utah quarterbacks. They also may see four different Ute tailbacks.

That's a lot of scenarios and contingency plans to go over.

One constant — Utah coach Kyle Whittingham, who's part of the scouting report as the Wildcats travel to Salt Lake City to face the Utes on Saturday and kick off a Pac-12 schedule that was shortened because of the COVID-19 pandemic.

Entering his 16th season, Whittingham has amassed a 131-64 record. He's the reigning Pac-12 coach of the year and someone conference teams will be dealing with for quite some time after he just signed a four-year contract extension through 2027.

One thing Whittingham won't have Saturday will be that boisterous fan base inside Rice-Eccles Stadium due to COVID-19 safety protocols. There will be a limited number of family/guest passes for players.

The place has been a tremendous home-field advantage, too, with the Utes going 70-24 at home under Whittingham, including 7-0 in 2019.

“It is all continuing to be uncharted territory,” Whittingham said. “That is the situation we are in, so we just move forward and hopefully we will play well on Saturday.”

The Utes are replacing their quarterback (Tyler Huntley), top tailback (Zack Moss) and a chunk of their stellar defense this season. They have three potential starting QBs listed on their depth chart, with either senior/graduate transfer Jake Bentley or sophomore Cameron Rising figuring to take a majority of the snaps.

Bentley went 19-14 as a starter while at South Carolina, finishing with 55 passing TDs and 7,527 yards passing. Rising arrived on campus for the 2019 spring semester from the University of Texas. There’s also senior Drew Lisk, who played in four games last season.

“They’re going to have a good player,” Sumlin said. “They always have good players.”

To prepare for the possibility that they could face piped-in “crowd noise” at Rice-Eccles, the Wildcats have been pumping in ambient sounds during practice. It's everything from blaring announcers to screaming fans to loud music.

“It might be to an advantage for us, not having all those fans screaming in our ear when we’re trying to get the play called,” said Arizona sophomore quarterback Grant Gunnell, who’s coming off a season in which he completed 65% of his passes for 1,239 yards, nine TDs and one interception in eight appearances. “You can kind of get your thoughts quicker.”

Arizona started a “ Stronger Together ” campaign that focuses on social injustice. It’s led by athletes.

The players plan to wear a sticker on the back of their helmets.

It will be a little different just jumping into Pac-12 play without a nonconference schedule.

“It lowers the margin for error. You have no room to grow right from the beginning when you used to have time to kind of grow into things, you have to start from game one now,” Utah junior receiver Britain Covey said. “Especially starting with a team like Arizona, who is a very good team. ... It’s going to be an on-the-fly scouting report.”

Brumfield had 263 yards and two TDs last year, while Wilmore had 194 yards and a score.

“If somebody clearly demonstrates through live game work that they are ahead of the other guys, then we will gravitate toward that guy,” Whittingham said. “Right now, we plan on using all four and we feel good about all of them.”

“It's a lot different playing in college compared to high school,” Whittingham said. “So, there is a lot of adaptability going on early, but I think they are doing well. I think the first game is going to be a good test to see where we are at.”