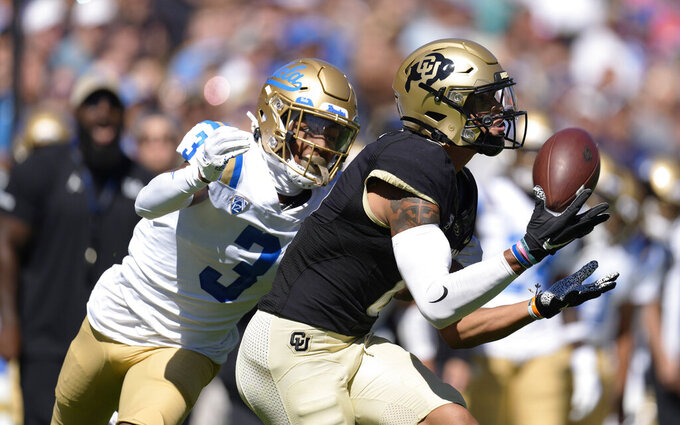 Colorado wide receiver Daniel Arias, front, pulls in a pass in front of UCLA defensive back Devin Kirkwood in the first half of an NCAA college football game Saturday, Sept. 24, 2022, in Boulder, Colo. (AP Photo/David Zalubowski)

Line: Arizona by 16 1/2, according to FanDuel Sportsbook

Both teams are looking for their first Pac-12 win, but Colorado is in more dire straits than Arizona. The Buffaloes are winless and have lost all four of their games — against TCU, Minnesota, Air Force and UCLA — by at least 25 points. Because of that, it's no surprise coach Karl Dorrell's job security is tenuous at best. Arizona is on the rise after going 1-11 last season. The Wildcats would be halfway to bowl eligibility with a win.

Arizona has been decent on the ground, averaging about 120 yards per game. Michael Wiley's run for 210 yards and three TDs while averaging 6 yards per carry. He'll get his shot at a porous Colorado defense that's given up 323 rushing yards per game.

Arizona: QB Jayden de Laura is a big reason the Wildcats are much more competitive this season. The Washington State transfer has completed about 60% of his passes for 1,149 yards, eight touchdowns and six interceptions.

The Wildcats' last home victory over Colorado was in 2018. The Buffaloes have a 9-3 record in the series in Tucson. ... Colorado QB Owen McCown became just the seventh true freshman in school history to start when he got the nod against UCLA last week. He completed 26 of 42 passes for 258 yards, one touchdown and one interception. ... De Laura threw for a career-high 401 yards in last week's loss at California. It was the 19th 400-yard passing performance in Arizona history. ... Arizona WR Jacob Cowing has caught a pass in 36 consecutive games. That's the second-longest active streak in the Bowl Subdivision.