Army's Jeff Monken on the brink of a West Point milestone 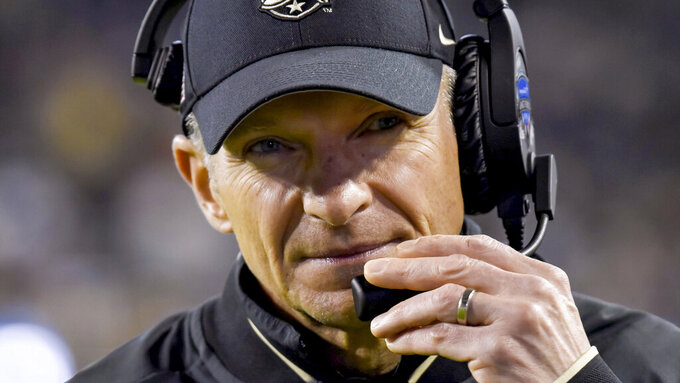 FILE - Army head coach Jeff Monken watches play against Missouri in the second half of the Armed Forces Bowl NCAA college football game in Fort Worth, Texas, Wednesday, Dec. 22, 2021. Monken enters his ninth season at the helm at Army poised to notch another accomplishment in his impressive run of success at West Point.(AP Photo/Emil Lippe)

Jeff Monken enters his ninth season at the helm at Army poised to notch another accomplishment in his run of success at West Point.

The Black Knights went 9-4 last season, finishing with a bowl victory over Missouri of the Southeastern Conference. That was win No. 58 on Monken's resume, tying him with Charles Daly for second all-time at West Point, behind Earl Blaik's seemingly untouchable total of 121 in 18 seasons.

Monken would rather talk about his players.

“I think they are just confident about who we are as a team,” he said. “They’re really tough.”

Army features a roster that returns standout linebacker Andre Carter II, who posted 15 1/2 sacks, second nationally in 2021, and a quarterback in Tyhier Tyler with plenty of experience. Last season the Black Knights had four quarterbacks with game experience, sort of a must with Army's version of the triple option, where the quarterback gets hit on nearly every play. Christian Anderson and Jabari Laws graduated, but also in the mix this season with experience are Cade Ballard and Jemel Jones.

“I don't know ... if I feel like one of those guys is absolutely, hands-down, the guy that needs to play the first play and every play," Monken said. "We feel good about both of those guys (Tyler and Ballard). Both of those guys are going to play in the game and that's fine with us. There's a group of quarterbacks there that we've got a lot of confidence in. That gives us some peace of mind.”

Army had some new visitors during preseason camp. Scouts from NFL teams made the trip to West Point to get a closer look at the talent, especially the 6-foot-7, 260-pound Carter. The native of Missouri City, Texas, was a third-team All-America selection last season.

“He exceeded my expectations last year,” defensive coordinator Nate Woody said. “I knew he could get to the quarterback, but we talked a little bit and said, ‘Andre, we’ve got to get turnovers, we’ve got to get takeaways from you.’ Heck, he got four of them. He got pass breakups that led to interceptions. He got an interception himself (against Air Force) and returned the ball down the field. Just awesome.”

Carter is on the watch lists for the Walter Camp, Lombardi, Outland, Bednarik and Nagurski awards, and he’s ready to keep wreaking havoc on opposing offenses.

“I don’t pay attention,” he said. “I try to stay focused on our team and getting better.”

Last season, Tyrell Robinson totaled 1,202 all-purpose yards — 609 rushing, 340 receiving, 112 kick return and 141 punt return. That made Robinson and 1946 Heisman Trophy winner Glenn Davis, aka “Mr. Outside,” the only Army players to record more than 600 rushing and 300 receiving yards in a season.

Army has a battering ram in the backfield with 260-pound JaKobi Buchanan and speed with Tyler and the elusive Robinson. The trio combined for 1,599 yards and 22 TDs rushing in 2021.

“He (Buchanan) is a tough runner, just a really strong, big, tough guy with the football,” Monken said. “He’s got good feet, I mean sneaky good in the hole where he doesn’t get tripped up. He’s able to kind of see things and step around, step over. He’s always a guy we can count on to get us a positive yard when we need it. When you don’t have negative yardage plays, you’re a good player at that position.”

Center Connor Bishop was voted a co-captain by his teammates along with safety Marquel Broughton (for the second time), and has been named to the Outland Trophy watch list. Bishop was an integral part of Army’s triple option success last season as the Black Knights finished second nationally in rushing (286 yards per game) to service academy rival Air Force and notched 46 rushing touchdowns, the most in the nation.

The Black Knights play six games in the friendly confines of Michie Stadium — against UTSA, Villanova, Georgia State, Colgate, Louisiana-Monroe and UConn. They open the season on Saturday night at Coastal Carolina. Other road games are against Wake Forest, Troy and UMass. The Commander-in-Chief's Trophy will be decided in the annual round-robin matchups against rivals Air Force, on the first Saturday in November in Arlington, Texas, and Navy in Philadelphia on Dec. 10.