Big 12 revenue distribution down only slightly amid pandemic 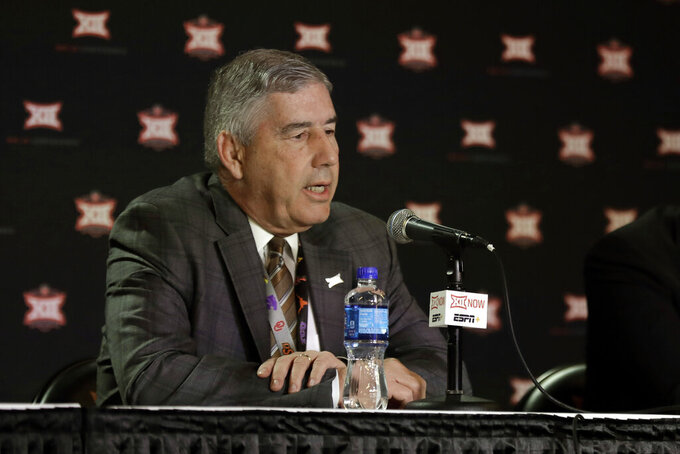 The Big 12's revenue distribution to its 10 schools decreased only slightly because of the pandemic that led to the cancellation of spring sports, though there is still plenty of uncertainty ahead.

Commissioner Bob Bowlsby said Friday at the end of the league's virtual spring meetings the league was distributing an average of $37.7 million to each school for the 2019-20 school year, just $1.1 million less than the last year. That ended a 13-year streak of increasing revenues for the conference.

The Big 12 got about $14 million less from the NCAA, which cancelled showcase events like the NCAA men's and women's basketball tournaments, and the College World Series. Plus, the amount of money in member participation subsidies for conference championships was cut in half, from about $36 million last year to $18 million, after the cancellation of the Big 12 basketball tournaments, as well as baseball, softball and other spring sports.

Oklahoma made the College Football Playoff for the third year in a row, and Baylor also played in a New Year's Six game with its Sugar Bowl appearance. Either Baylor or Kansas topped the AP men's basketball poll for the final 2 1/2 months of the season, and the Baylor women were looking for a chance to defend their 2019 national title.

“Despite the fact that we had an abbreviated year, we had a pretty good year,” Bowlsby said.

“The financial state of the Big 12 just in general is really healthy,” said Baylor's Mack Rhoades, chairman of the Big 12 ADs. “I think the ability to make institutions whole, or very close to whole, has been a big-time positive for every institution.”

Those distribution figures don’t include third-tier broadcast rights, such as what Texas gets from ESPN for the Longhorn Network.

TCU Chancellor Victor Boschini, chairman of the Big 12 board, said his school has lost about $50 million for different reasons because of the coronavirus.

“As far as how we’re going to make it out, we’re scrambling to do that right now,” Boschini said. “We’re cutting costs everywhere. We’re not giving raises till January, taking lots of measures like that. All the campuses, I think are doing similar things."

The Big 12 board last week set June 15 as the first day campuses can be open to voluntary workouts for football players, with other athletes to follow in July.

Each school is still working through protocols, such as testing and cleaning, to facilitate the safe return for students and staff. The league has contracted with Infection Control Education for Major Sports to help with the procedures.

Before the pandemic, the Big 12 had projections of revenue distribution reaching the mid-$40 million range per school. The conference's current broadcast rights deal with Fox and ESPN expires in five years. It is hard now to predict future revenues.

There is still a lack of clarity for what football season will look like, such as how many fans might be allowed to attend games.

“I’m optimistic that we’ll start the season somewhere around Labor Day," Bowlsby said. “I also think that we’ll likely have some interruptions. And we’ll have some moments on campuses and even within athletics departments where we have outbreaks and we’ll have to deal with them in real time. So I’m bullish about our opportunity, and more so than I was 30 days ago to answer your question directly. And I hope I’m even more so 30 days henceforth.”

Boschini described himself as “very optimistic” about the football season starting on Labor Day weekend as scheduled.

“I think it's going to happen,” he said.

The Big 12 board of directors, made up of school presidents and chancellors, approved a 10-percent reduction in the league's operation budget for fiscal year 2021, which begins July 1.

“We just think that’s good planning in order to get in position in case we need to do less and save more. But we’re planning and expecting to be able to capture that television money,” said Bowlsby, though acknowledging the possibility of television partners seeking reductions if the league can't deliver the required games for broadcast. “We can’t do anything other than manage to our contracts right now and then be flexible enough to make adjustments.”

Bowlsby said Big 12 schools aren't planning to push toward regionalization of Olympic sports, though the league is looking at a variety of scheduling models, and for ways to save money in everything it does.

“Cutting championships is probably the last thing we’re going to do to save money,” he said. “'That doesn’t mean that we wouldn’t alter the way that we manage the championships in order to optimize our spending.”