Bo Nix, No. 6 Oregon host No. 24 Washington on Saturday 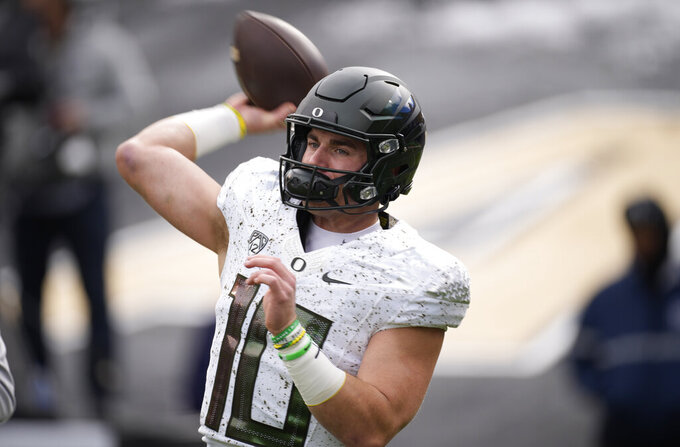 He's passing for touchdowns, running for some more, and even catching a score. About the only thing left is to kick a field goal.

"You can’t really just say it’s me because you've got guys running touchdowns, you've got guys catching touchdowns,” Nix told reporters this week. “I literally think my job is kind of the easiest because I just get those guys the ball and they do the work for me. And so I’m fortunate to be on an explosive offense like this."

It was his third straight game with at least five touchdowns. He now has 36 total touchdowns this season — 22 passing, 13 rushing and one receiving — and is getting more Heisman Trophy mentions as the season rolls on.

“I think Nix is playing with a ton of confidence,” Washington coach Kalen DeBoer said. “You can just see the way he’s operating, the game has slowed down for him. Man, I can’t say enough good things about what he’s doing leading that offense.”

Washington quarterback Michael Penix Jr., meanwhile, is the national leader in passing yards per game with 359.1. He had a streak of eight straight games with 300 or more yards passing that just ended last week in a victory over Oregon State.

Penix has 3,232 yards passing for the season, 23 touchdown passes and five interceptions. He’ll need a couple more big games if he’s going to approach Cody Pickett’s school record of 4,458 yards passing set in 2002, but facing Oregon’s pass defense that’s giving up 277 yards per game through the air gives Penix a chance to add on to his season total.

Oregon coach Dan Lanning said you can ignore rumors he might be headed for Auburn, explaining “the reality is the grass is not always greener.”

“In fact, the grass is damn green in Eugene and I want to be here in Eugene for as long as Eugene will have me. This place has everything that I could possibly ever want, my family could ever want. I’ve got an 11-year-old that’s lived in eight states; the last thing I ever want to do is leave," Lanning said.

Oregon fans got burned before by a coach who bailed after just one season. Willie Taggart coached Oregon in 2017 but didn't even stick around for the Ducks' bowl game before moving to Florida State. Taggart is now at FAU.

The series between Washington and Oregon started in 1900, but things got really heated in the ’90s and into the 2000s.

Washington, playing under coach Rick Neuheisel in the early 2000s, celebrated a victory by dancing on the “O” in the middle of the Autzen Stadium field, drawing the ire of Ducks fans.

But Oregon will always have “The Pick.” Kenny Wheaton intercepted Washington quarterback Damon Huard in the final minute and ran it back 87 yards in a 31-20 victory in 1994. The Ducks went on to the Rose Bowl that year.

Oregon reeled off a 12-game winning streak against the Huskies between 2004 and 2015. That was broken in 2016, when the Huskies destroyed the Ducks 70-21 at Autzen. Huskies quarterback Jake Browning pointed at Oregon linebacker Jimmie Swain as he ran past him. That moment in the rivalry was dubbed “The Point.”

Washington’s defense was run over on the opening drive last week by Oregon State, but made a quick recovery and held the Beavers in check for most of the final three quarters. The 262 yards allowed by the Huskies were the fewest given up to an FBS opponent this season.

Slowing down Oregon will be a far greater challenge, but the Huskies will get a boost with the expected full return of standout linebacker Edefuan Ulofoshio. He missed the first eight games of the season recovering from a knee injury suffered last winter during offseason workouts. Ulofoshio played a handful of snaps in the win over Oregon State and is expected to have his snap count lifted against the Ducks.

Washington hasn’t visited Eugene since 2018, when Oregon won 30-27 in overtime. Washington kicker Peyton Henry had a chance to win the game in regulation but his 37-yard field-goal attempt on the final play was wide right.

Henry was a freshman then. Now a senior, he kicked the game-winner last week against Oregon State and probably wouldn’t mind another shot at doing the same against the Ducks.