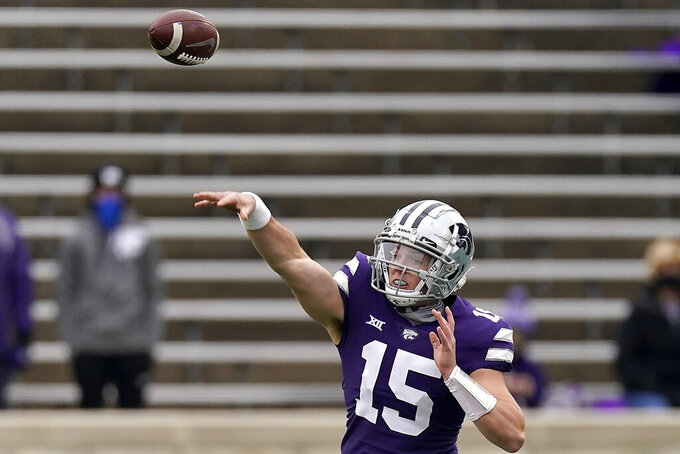 Kansas State quarterback Will Howard passes the ball during the first half of an NCAA football game against Kansas Saturday, Oct. 24, 2020, in Manhattan, Kan. (AP Photo/Charlie Riedel) 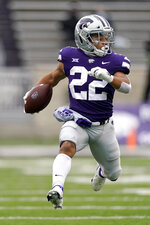 The Wildcats' didn't even block a kick, either.

Instead, it was Phillip Brooks returning a pair of punts for touchdowns, Blake Lynch hitting every kick he attempted and an opportunistic coverage unit that pounced on a muffed punt return that spurred No. 20 Kansas State to a 55-14 victory over the Jayhawks on a cold, blustery Saturday at Bill Snyder Family Stadium.

“When we were at North Dakota State, we were better than everybody offensively and defense,” Wildcats coach Chris Klieman said, “so why would we waste a chance at roughing a kid on special teams. Here, it's much more competitive, so you better find an advantage on a week-in, week-out basis. That has to be the edge.”

It has been so far. The Wildcats (4-1) had blocked a kick each of their last four games, helping them steadily climb The Associated Press poll, and they are now 4-0 in the Big 12 for the first time since 2014.

“We’re really good on special teams and we knew we needed to be really good today,” Klieman said, “and we were really good in all phases, and good job of blocking on punt returns and the fumble on the punt. We emphasize it a bunch and we had great success and we benefited from all the work and effort we put into it.”

The Wildcats' Will Howard threw for 243 yards and two touchdowns while Justin Gardner returned an interception 25 yards for another score. Deuce Vaughn added 71 yards rushing and another touchdown as Kansas State kept the Jayhawks (0-5, 0-4) without a win in the series since Nov. 1, 2008, in Lawrence.

Jalon Daniels was just 22 of 39 for 207 yards for the Jayhawks, who were playing their first game since coach Les Miles returned from a positive COVID-19 test. It also was their first game since running back Pooka Williams, an All-Big 12 pick a year ago, opted out of the remainder of the season to be with his ailing mother.

Along with giving up two punt return TDs, the Jayhawks also had two punts nearly returned for scores and were lousy in their own return game. They also watched Jacob Borcila bang a field-goal attempt off the upright.

The lopsided score allowed Klieman to empty his bench early in the fourth quarter.

“We’re a good football team,” said Miles, who was down to his third-string punter and without several other crucial pieces on both sides of the ball. “If we get healthy, somebody will find a very talented team that is ready to play, and that could hopefully be this Saturday that were about to play.”

The Wildcats' offense actually struggled early behind their own freshman QB, making his second start in place of the injured Skylar Thompson. But their defense and special teams scored 27 points in staking them to a 34-7 halftime lead.

The first points came when the Jayhawks were forced to punt, and a penalty for running into the kicker gave them a do-over. Brooks made them pay for taking it, scooting 55 yards for the touchdown.

Blake Lynch added a couple field goals before Gardner stepped in front of Daniels' throw-back screen pass and pranced into the end zone to make it 20-0. And when the Jayhawks finally got a TD of their own, Howard answered with a touchdown to Sammy Wheeler and Brooks brought back his second punt for a touchdown on the final play of the first half.

The Wildcats put the game away with three consecutive scoring drives to start the second half.

“Definitely starting in that second half I really felt like I was fitting in and, you know, the offense really kind of started flowing for me and for us,” Howard said. “We came into halftime and we were up big, but we knew offensively we hadn't played well. We had to come out and make a statement and we did exactly that.”

In the first half alone, referee Kevin Hassell had to overturn an interception that hit the ground, a fumble when the ball-carrier already was down and a touchdown catch in which the Jayhawks' Andrew Parchment landed out of bounds. Hassell also overturned a targeting penalty and announced holding on the wrong team.

Kansas punter Donovan Gagen had a day to forget. He was crushed after unloading a punt, was lit up on Brooks' return for a score, then had to make a TD-saving tackle on which he appeared to hurt his left shoulder.

Kansas had lost its previous 11 games to the Wildcats by an average of 26 points, so Miles's second loss was particularly gruesome. The Jayhawks' losing streak began under Mark Mangino, continued under Turner Gill and Charlie Weis, included interim coach Clint Bowen and four years under David Beaty.

Kansas State had seven penalties in the first quarter but just one the rest of the way. The Wildcats also showed off their trademark discipline by going 6 for 6 in the red zone and improving to plus-9 in turnovers on the season.