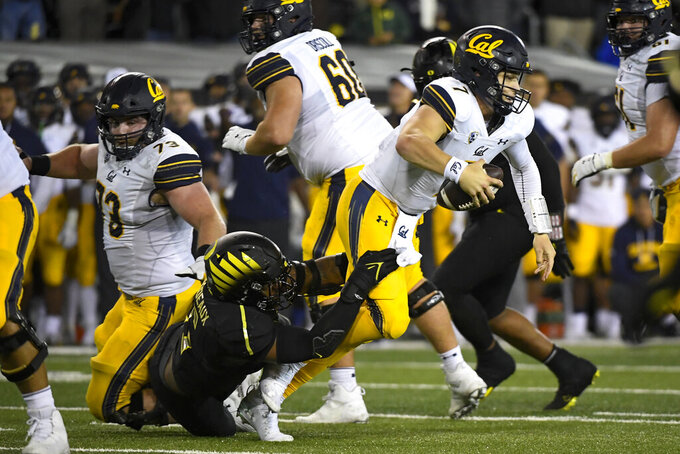 BERKELEY, Calif. (AP) — Even though his team has lost five of its first six games, California coach Justin Wilcox has been encouraged by how the Golden Bears have responded to the adversity.

Cal is off to its worst start since Wilcox took over in 2017 and will need to make a remarkable turnaround over the final month and a half to avoid missing out on a bowl game for a second consecutive season.

“Everybody is obviously frustrated and disappointed,” Wilcox said. “Nobody expected us to be here in terms of what our win-loss record is. We have a chance to play a lot more football and finish the season right. We have a very, very strong group of leaders on the team who care a great deal about their football experience, their teammates and our team.”

The Bears (1-5, 0-3 Pac-12) get their first crack at turning their fortunes around against Colorado on Saturday at Memorial Stadium.

Cal’s record could easily be much better. Four of its five losses have been by a touchdown or less, including a 24-17 defeat at Oregon on Oct. 15. The Bears fell two yards shy of forcing overtime in that game when quarterback Chase Garbers threw an incompletion on fourth-and-goal from the 2.

“There’s been opportunities in every game to win the game,” Wilcox said. “Ultimately the stat that matters is winning and losing. We’ve been close and they don’t count close in wins and losses.”

Colorado (2-4, 1-2) hadn’t been close in many of its games until the Buffaloes blanked Arizona 34-0 coming off a bye. Before that, coach Karl Dorrell’s team suffered consecutive blowout losses to Minnesota, Arizona State and Southern California.

Like Wilcox, Dorrell said his team has remained resolute despite its struggles.

“The light’s starting to glow now,” Dorrell said. “They see the roots of why things are getting better, why we’re playing better. Everybody has a job and a focus to get better at their role.”

Cal’s running game has been sporadic all season, although backup Christopher Brooks has found a nice rhythm the last two weeks. Brooks, who ran for 914 yards as a sophomore in 2019, tallied 108 yards and a touchdown on 22 carries in the Bears' games against Washington State and Oregon. “He’s back closer to 100%. In-season healthy as we call it,” Wilcox said. “He ran strong, he ran through some tackles, he broke some tackles.”

SHUTOUT WAS NICE BUT

Colorado linebacker Carson Wells hopes the Buffaloes don’t get too caught up in the hype after holding Arizona scoreless. Wells had four tackles for loss and returned an interception 50 yards for a touchdown but felt the defense let the Wildcats off the hook a few times.

Despite’s Cal’s inconsistencies, quarterback Chase Garbers is having the best season of his career. Garbers leads the Pac-12 in total offense (283.3 yards per game), is second in passing and third in completions.

Dorrell said the Buffaloes will have a tough time trying to disguise their defenses against a quarterback as experienced as Garbers.

“Whenever you have a guy who’s a multiyear starter, they’ve seen most of the tricks of the trade. from what defenses present,” Dorrell said. “They can find some weak links. He’s going to find ways to get his skill guys the football and make good decisions when there’s blitzes, being able to pick up blitzes and stuff like that.”