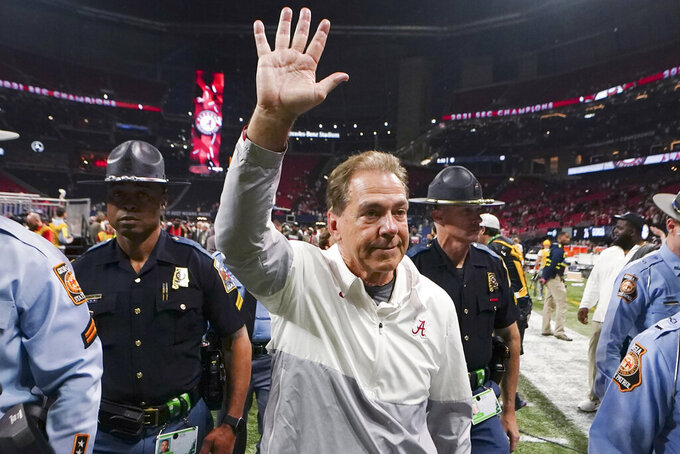 ARLINGTON, Texas (AP) — Cincinnati proved it belonged, Alabama showed it should never be doubted and Jim Harbaugh finally delivered Michigan fans the season they have been craving.

The College Football Playoff picture easily fell into place Saturday as the Bearcats stayed unbeaten, poised to become the first team from outside the Power Five conferences to make the four-team field in the eight-year history of this postseason format.

"If it’s meant to be, it will be. I don’t think these guys can be denied,” Cincinnati coach Luke Fickell told reporters.

Meanwhile, in a season highlighted by upsets, who would have guessed the Crimson Tide would get in on the act? Underdog Alabama beat No. 1 Georgia in the Southeastern Conference championship game to likely ensure both SEC teams make the CFP.

Heading into the late games all that stood between the selection committee and a stress-free night before Sunday's CFP unveiling was the Big Ten championship game. No. 2 Michigan complied, thumping Iowa to lock up its first playoff appearance.

With an American Athletic Conference championship on its home field, there was nothing left to debate about Cincinnati. The Bearcats (13-0) buried Houston with a third-quarter surge to become the CFP's first true Cinderella.

"We just want to play football," Cincinnati quarterback Desmond Ridder told reporters. "That’s all we care about. Doesn’t matter who, where, when — just put the ball down. We want to play.”

The Bearcats even got a little help before taking the field: Baylor used a late, goal-line stand to upset Oklahoma State (11-2) in the Big 12 title game and end the Cowboys' playoff hopes.

“These things are difficult to swallow. But we’ll be back,” Oklahoma State coach Mike Gundy said.

Cincinnati entered the day fourth in the CFP rankings. No Group of Five conference team had ever even been close to a playoff spot heading into championship weekend. Oklahoma State was lurking at No. 5, trying to finish its season 12-1 with consecutive victories against ranked teams.

A victory for the Cowboys could have set off a playoff debate featuring a Big 12 team and a future Big 12 team in Cincinnati.

“It’s interesting that a lot of the conversation is around Oklahoma State at five and Cincinnati at four,” Big 12 Commissioner Bob Bowlsby said before the title game at AT&T Stadium. “How ironic is that?”

Michigan ended any chance the independent Fighting Irish (11-1), sitting at home in sixth in the CFP rankings, might have had to slip into the CFP with newly hired head coach Marcus Freeman.

For a few hours, Baylor (11-2) had a glimmer of hope to become the first two-loss team to reach the playoff.

Mild-mannered Bears coach Dave Aranda passed on a chance to stump for his team, instead lamenting those two losses that included a late-season upset by TCU.

“That’s my fault,” he said. As for the playoff: “I’m sure it will work out the way it’s supposed to."

And so it did for the teams that came into the weekend ranked in the top four.

Alabama's convincing win against Georgia surely locked up two spots: One for the Tide (12-1) and one for Georgia. The Bulldogs (12-1) had rolled through the season with a defense that was allowing less than a touchdown per game. Georgia has been atop every CFP ranking so far.

Underdogs for the first time in six seasons, Alabama dropped 41 points on the Bulldogs.

“What these guys wanted to gain was more respect," Crimson Tide coach Nick Saban said. “Not just the fact they were underdogs, but you guys gave us a lot of really positive rat poison. The rat poison you usually give us is fatal. This rat poison you gave us this week was yummy.”

Alabama is probably in line for a No. 1 seed, though Michigan (12-1) poured it on against the Hawkeyes to give the committee something to consider.

The Heisman Trophy was likely settled at Mercedes-Benz Stadium, too. Alabama's Bryce Young passed for an SEC title game record 421 yards against the nation's best defense. Finalists who will be invited to New York next week for the Heisman presentation will be announced Monday.

A conference has put two teams in the CFP twice before. In 2017, Alabama and Georgia ended up playing for a national title won by the Tide in overtime. It certainly looks like the Tide and Bulldogs could be headed for another championship game matchup.

Maybe Harbaugh and the Wolverines will have something to say about that.

The coach most college football fans love to hate took a pay cut after last season and then in year seven at his alma mater finally checked all the boxes Michigan fans hoped he would when he was hailed as a program savior in 2015.

Pittsburgh (11-2) beat Wake Forest in the Atlantic Coast Conference championship game to win the conference for the first time and lock up a spot in a New Year's Six game. On Friday night, Utah (10-3) earned its first trip to the Rose Bowl by beating Oregon in the Pac-12 title game.