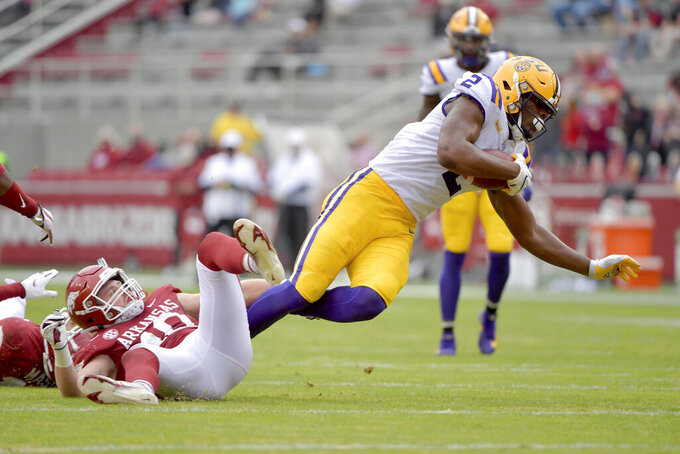 BATON ROUGE, La. (AP) — LSU freshman tight Arik Gilbert, who entered this week leading all active Tigers in receiving, has decided to opt out for the remainder of the season.

LSU coach Ed Orgeron announced Gilbert's decision on Wednesday and the coach could not say for certain whether Gilbert intended to return next season or transfer elsewhere.

“Do I think we have a chance at getting him back next season? Yeah,” Orgeron said. “Is there a chance of him transferring? I don’t know that. He hasn’t told me he’s transferring, but obviously we’re going to re-recruit him and obviously we wish him the best."

Orgeron said the 6-foot-5, 249-pound Gilbert told him he was opting out because "his body was hurting and he had some things he had to take care of.”

Under NCAA rules adopted during the coronavirus pandemic, players may opt out this season without adversely affecting their scholarships.

Gilbert had 35 catches for 368 yards and two touchdowns. He had been second in receiving at LSU behind Terrace Marshall Jr. until Marshall decided to opt out before last weekend's 55-17 loss to Alabama.

Gilbert is from Marietta, Georgia, and was the Gatorade Male Athlete of the Year for 2019-20 — a distinction that made him arguably the highest-profile member of LSU's previous recruiting class.

LSU (3-5), which has gone from winning a national title last season to being one loss away from having its first losing season since 1999, has two regular season games remaining. The Tigers travel to No. 6 Florida this Saturday and close the season at home Dec. 19 against Mississippi.