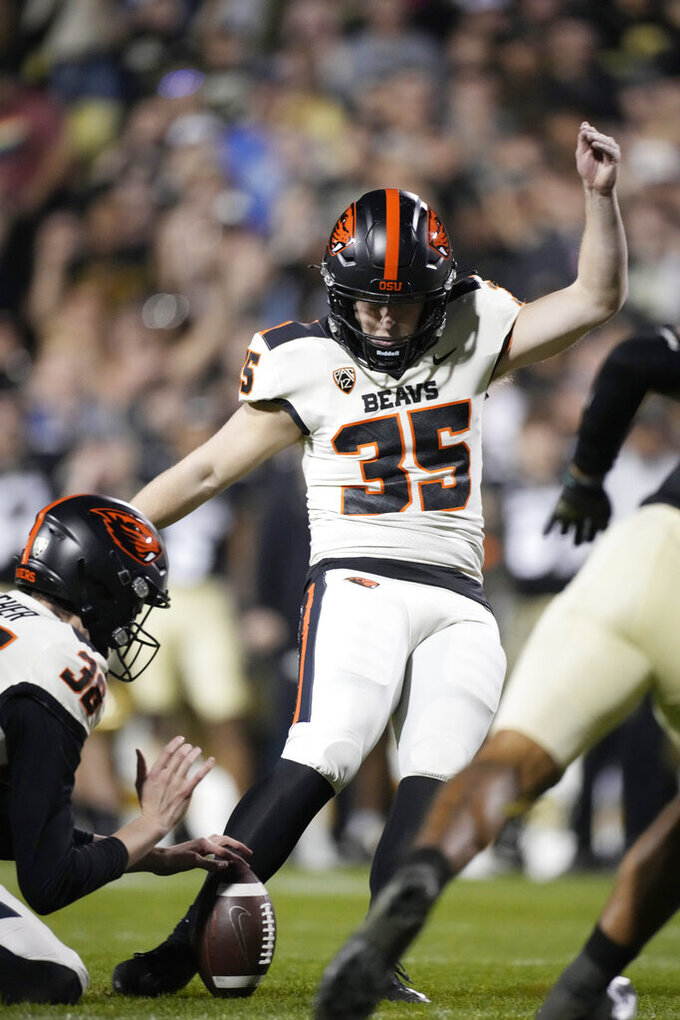 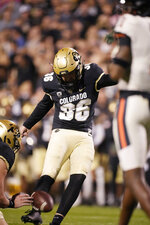 BOULDER, Colo. (AP) — Cole Becker was more impressed with his counterpart's big field goal than he was with his own game-winner in double overtime.

Oregon State kicker Everett Hayes missed a 38-yard field goal in the second overtime after nailing a school record 60-yarder at the end of regulation, and Becker's 43-yarder gave Colorado a 37-34 win over the Beavers on Saturday night.

“That's the moment all young kickers dream about,” said Becker, a freshman, after navigating his way through the homecoming crowd that rushed the field when his last field goal sailed high through the uprights.

Colorado (3-6, 2-4 Pac-12) won for the first time in four multi-overtime games in the program's history and the Buffaloes denied bowl eligibility for Oregon State (5-4, 3-3), which remains in search of its first six-win season since 2013.

The teams exchanged touchdowns in the first overtime with Brendon Lewis scoring on a 9-yard quarterback keeper for Colorado and running back B.J. Baylor snaring a high direct snap with his left hand and trotting into the end zone.

Baylor, the conference's leading rusher, gained 98 yards on 22 carries but the Buffaloes were pleased because they were without their top tackler in injured linebacker Nate Landham and several others stepped up.

Colorado actually outgained the Beavers on the ground 222 yards to 220 thanks to Jarek Broussard's 151 yards on 24 carries, including a 49-yarder that set up a go-ahead touchdown late in the fourth quarter.

For the game to even go extra time required an incredible finish by the Beavers.

Hayes missed a 51-yarder with 32 seconds remaining, but the Beavers had all three of their timeouts and they forced Colorado to punt the ball, which Anthony Gould returned 26 yards to the Beavers 49 with 5 seconds left.

With five defenders at the goal line, Chance Nolan threw a 9-yard pass to Gould, who stepped out of bounds at the Buffs 42 with 1 second remaining.

With his holder at the 50-yard line, Hayes easily cleared the crossbar, his 60-yarder breaking the school record of 58 yards set by Chris Mangold in 1982 and tied by Alexis Serna in 2006. It also tied Mason Crosby's record, set against Iowa State on Oct. 16, 2004, for longest field goal at Folsom Field

“I was like, ‘Wow!’ I think he definitely has the length,” Colorado coach Karl Dorrell said. “And it was right down the pike. And what I did was I looked at our sideline just to see what their thoughts were. It wasn't like they hung their head. They just said, ‘We’re going overtime.'”

“It's tough to put a guy in that situation,” Oregon State coach Jonathan Smith said. “But he nailed it.”

That score was set up by Broussard's 49-yard run right after Nolan had given Oregon State its first lead at 24-20 with a 27-yard touchdown toss to Tre'Shaun Harrison midway through the fourth quarter.

Both teams provided an appetizer for the frenetic finish by exchanging field goals in the final 39 seconds of the first half.

Hayes matched Becker's 52-yarder with a 45-yarder as time expired to pull the Beavers to 13-10 at halftime.

Oregon State: On an unseasonably warm day in the Rocky Mountains when it was 73 degrees at kickoff, the Beavers started out cold and trailed most of the night in their second consecutive loss.

Colorado: The Buffs had a season-best 144 yards of offense in the first quarter but in the second quarter they had 50 yards of offense with 40 yards of penalties. They were flagged three times in five plays after reaching the Oregon State 15 with 1:33 remaining. But they were resilient and powered their way to a win after blowing 10-0 and 20-10 leads.